Since moving in, I've had my record player on a stool and the LPs in a cardboard box.  It didn't look great.  Also, my parents, who had bequeathed me a sizable portion of their LP collection, were coming to visit and I wanted to show that I appreciated them and used them.  There's nothing better than a dance party with records. 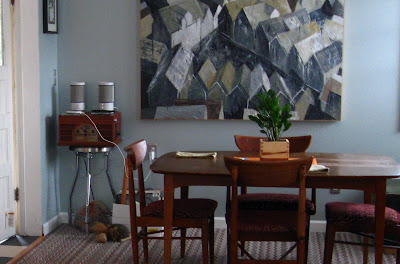 I found these bookcases on craigslist and the guy was also selling a display box. 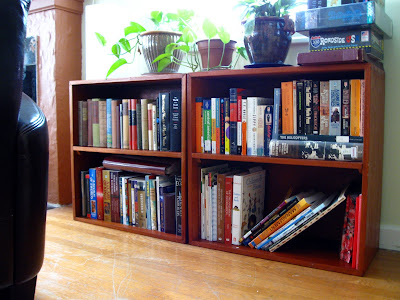 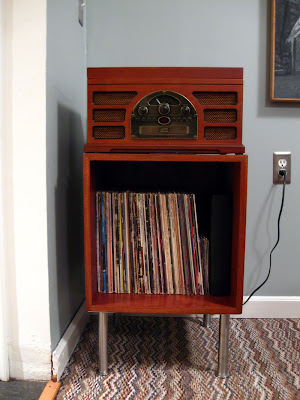 I cleaned up all the pieces with some Howard Feed-N-Wax wood preserver and bought some metal legs at Ikea for the display box.  I think it's just the right size and height for my record player and LPs.  My only regret is that I didn't buy the second display box he was selling.  I think I could have added legs, fashioned a door for it, and turned it into bar storage.
A pretty rad thing happened when I sold my old pressboard bookcases on craigslist: the buyer told me he grew up on my street and used to play in my house in the 60s!  He asked if the "little house" was still in the backyard.  I told him we had to remove the shed because it was rotting and he told me how much fun he had playing in it as a kid.  He also told me that the family that lived here had two little girls and that they moved to Texas.  It makes me really content to know that people had fun and were happy in this house.
Posted by Heather