So when I recently attended the Garden Bloggers Fling I got to meet Carol, the godmother of Garden Bloggers' Bloom Day. She has a cute illustration of a Victorian woman pushing a lawn mower on her website and, because I am a dolt, my brain filed this away literally. I pictured her as an older woman with flowing gray hair. She wears pantaloons and she carries a wicker basket to collect flowers.

In reality, Carol is a modern woman who wears pants and rocks a blond pixie cut. I tell you this in case you were similarly confused.

And you know what? I just looked at that photo again and it's not a Victorian woman. It's like an English woman, maybe turn of the century? It's a wonder I'm gainfully employed.

Anyway, it's so bloomy right now! This could take a while.

Whew, we made it! Thanks again to our host, Carol, who is neither a Victorian, nor a Dowager Countess, who maintains her idyllic manor with a push mower and a snarky aside.
Posted by Heather No comments:

I recently returned from the Austin Garden Bloggers' Fling, which was so fun I feel like I could sleep for a week. I ate my weight in brisket, I got bitten by both chiggers and fire ants, and I drank gallons of margaritas. I even saw the Alamo, so I'm feeling pretty complete.

A lot of times touring other gardens can make me feel pretty down on my own but this trip felt like a good, inspiring shot in the arm. Austin gardens have something for everyone, from super modern corten steel to quirky nichos.

Austin has so many more trees than I expected, even in areas of new construction. I suspect the need for shade is so great that they work around existing trees instead of leveling everything like they do in Portland. As we're both trying to keep our cities weird, it was hard not to compare the two.


When they say "everything is bigger in Texas" they are referring to their agaves, their margaritas, and their highway on-ramps, which are terrifyingly tall. Every time we drove over one, seemingly 1000 feet in the air, I felt like a country bumpkin. They must have gotten a huge amount of infrastructure money because all of the freeways and highways are seemingly under construction, all at once.

I found myself in love all over again with salvias of the greggii and microphylla variety. Gardeners tuck them in everywhere all over Austin and they seem to look great, no matter the color. 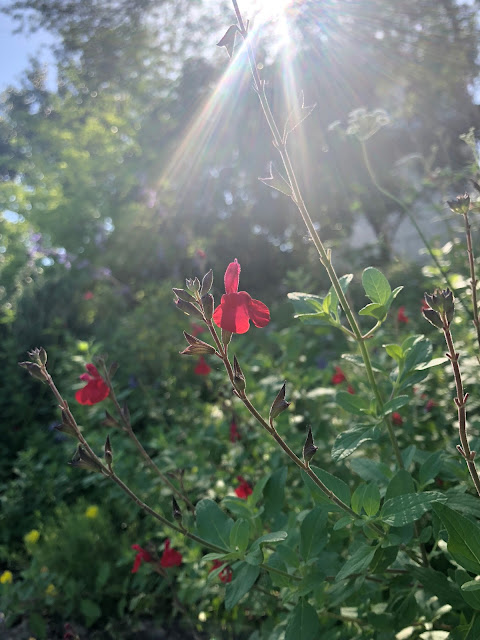 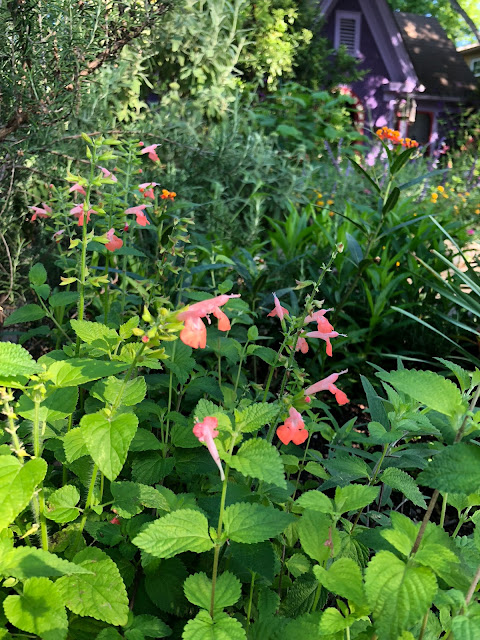 I also fell in love with Aspidistra elatior, which falls under the "useful but unexciting plant that comes with your yard when you buy a house in Austin" category. I have plenty of friends that grow this plant but it took me flying to Texas to notice it. I've said it before: everything is more magical when you go through life not really paying attention. Surprises are everywhere! 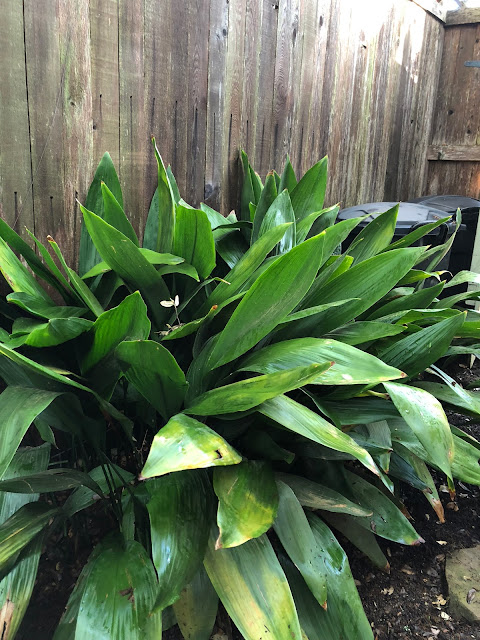 I was also impressed by the lack of litter in Texas. That "Don't Mess with Texas" slogan is working. Washington employs "Litter and It Will Hurt" which is somehow more menacing and yet less effective. Oregon doesn't have a slogan (that I know of), it just sits and passively sighs and glares while you litter, wishing you wouldn't. It would say something but we're polite and we don't do that sort of thing.

Now that I have a dog I am even more aware of how filthy Portland's close-in neighborhoods are. Going on walks is such an adventure now. What will I pull out of Bee's mouth this time? A Q-tip? A cigarette butt? A rotting pineapple? ALL OF THESE THINGS HAVE HAPPENED.


I got to see gardens that I've loved online for years, including Jenny Stocker's (of Rockrose fame), which was so genuinely thrilling I considered taking a xanax that morning so I wouldn't embarrass myself. Her garden was a revelation for me when I started gardening and it was even better in person. 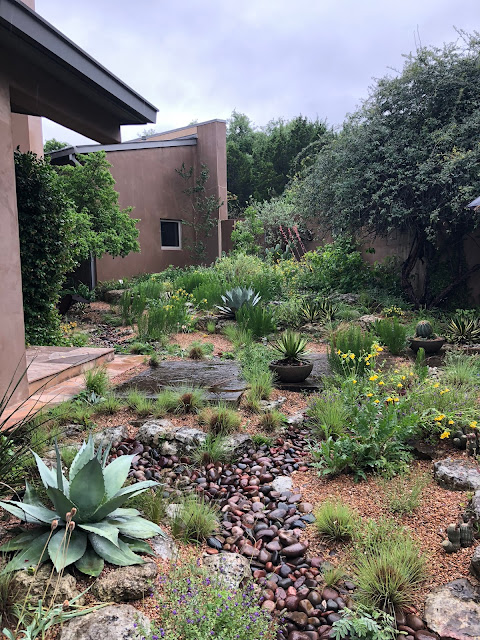 I also got to see Pam Penick's garden, which was so fucking delightful and beautiful I want to live in her pump house.


Mostly I realized how much I like gardens that really go for it. I spend a lot of mental bandwidth worrying that people are judging my garden choices behind my back. I police my style because I don't want to make mistakes. I'm not a designer and I don't make a living in the horticulture industry. I'm a librarian, for Pete's sake, I'm expected to be boring and unstylish. If someone doesn't like my mismatched pots they can drink a Mexican martini in the garden of someone more talented.

Because I experienced my first Mexican martini and I am HERE FOR IT.

Life is short, why not make your margarita twice the size and embrace your inner mermaid? More is more. 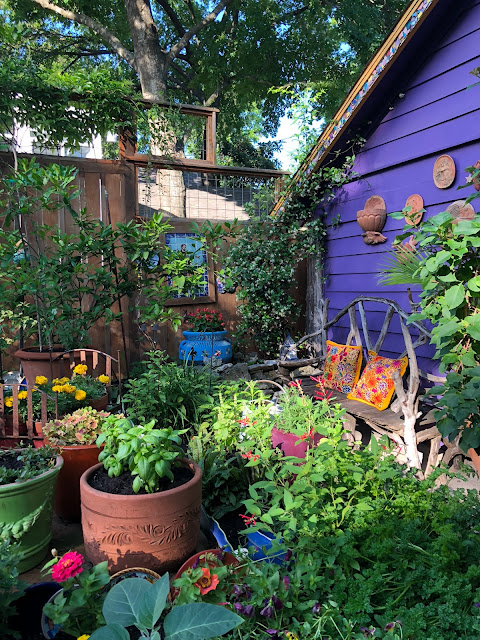 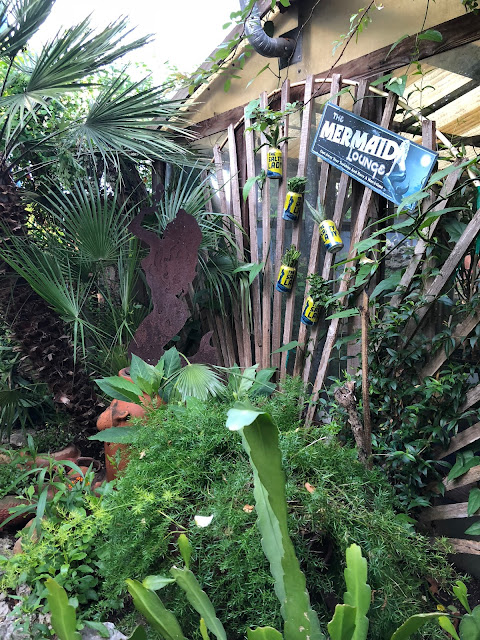 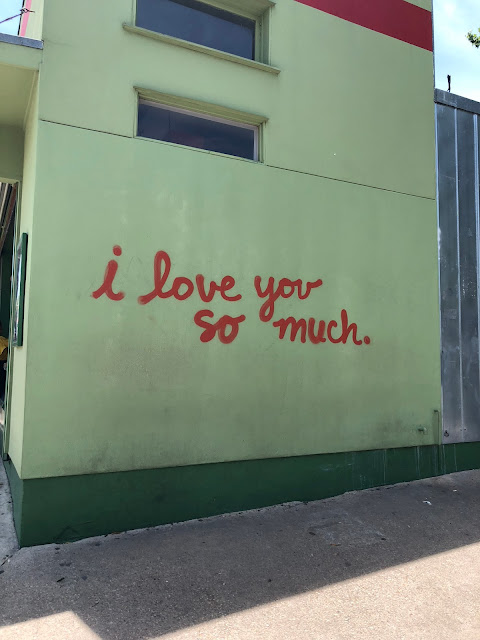