I've been suffering from a bit of Homeowner Fatigue lately.  Now that the basement flooring is in (and subsequently off my mind) other things in the house are clamoring for attention. It's never ending.

The kitchen counters desperately need regrouting.  My roommate has a bad habit of leaving dishes to dry, not in the dishrack, but on the countertop.  Where the grout has cracked water gets down and has begun to rot it.  Regrouting the tile would take all weekend, if not more. It's something I've always thought I'd do when I was in between roommates, since it renders the kitchen kind of unusable. 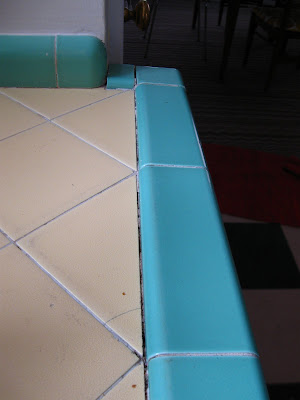 Then last Thursday my dryer broke.  It just wouldn't start.  It came with the house, it's very old, and the whole front lifts off the front of the machine.  I'm shocked it lasted as long as it did, and yet it felt like a betrayal when it finally died.  I could have called a repairman but I really suspect I'm better off with a new one.  I think, because the front was no longer connected to the front of the machine, a lot of extra hot air was escaping the dryer and heating the laundry room.  That's a whole lot of waste.

So the money I had saved for building a new fence, a fence I desperately need, was spent on a new dryer.  My beautiful friend T came over to talk about backyard landscaping and I got so overwhelmed by the magnitude of what she was planning that I had to interrupt her and tell her that all I can handle right now is her telling me, "Plant your daphne bush here." 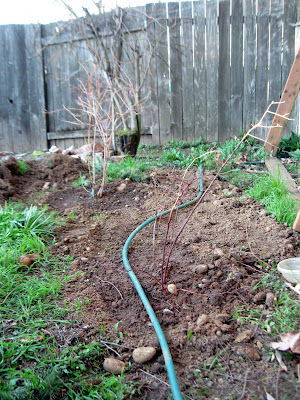 Blueberry bushes are finally in the ground after being in pots for three years!
The problem here is not so much the house (which I still love) but my brain and the fact that I have a hard time not trying to give myself projects.  Before I started grad school I gave myself the task of reading as much as possible, since I knew I wouldn't have time once I was school.  That was a great project, particularly since you can do it in bed.  I think everyone seeks projects in degrees but a house will *always* give you something to do. And I think it would still be the case, though less so, if I had bought a new house.

So I need to develop some sort of blinder for home repair once the fence is in so I don't feel bad when I just putter in the yard all summer.  Oh wait . . . that's a project.  I'm terrible at this.
Posted by Heather