Let there be light

Every year my friend celebrates his birthday by donning a bathrobe, inviting a bunch of friends over, and watching The Big Lebowski in the backyard. He projects the movie onto the back of his house and it's really fun. The last two years we have been lucky enough to host that party for him. It's all the fun of hosting a party with none of the stress and it's great.

Have you seen those great outdoor weddings where they have a ceiling of globe string lights? They are beautiful and I've always wanted that for the backyard.


In the first months in the house I had friends over for dinner and I tried to create that effect by running Christmas lights from a ladder to the roof. It looked tacky and sad. It's hard when you don't have mature trees in your yard to run lights to. I have the one mature tree in my yard, the cedar, which has a line running to it that we wrap with Christmas lights. It helps during barbecues but you don't get the ceiling-of-lights effect.


Greg and I threw a couple of ideas around. The first was to take one of those very heavy umbrella stands that people use under their patio tables and stick a pole in it, from which we'd run lights. But we didn't think that would be strong enough. I've read that you can stick a pole in a bucket of rocks but that doesn't seem strong enough either.


Ultimately what worked was driving a 3.5 foot DWV pipe (supposedly less brittle than PVC) into the ground with a sledgehammer. 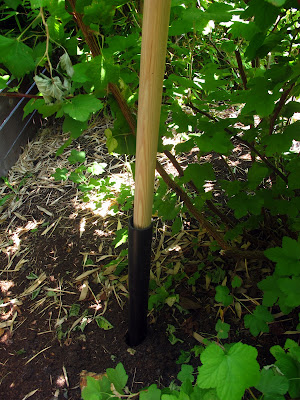 I held a piece of wood over the pipe so it wouldn't split where Greg hit it with the sledgehammer. We left about a foot sticking out, into which we inserted a 12 foot pole we found at the Home Depot. An eye screw at the end, a couple of zip ties, and a carabiner and we were in business. We wanted globe lights for the party but couldn't get them delivered in time, so these rope lights we had on hand worked for the time being. 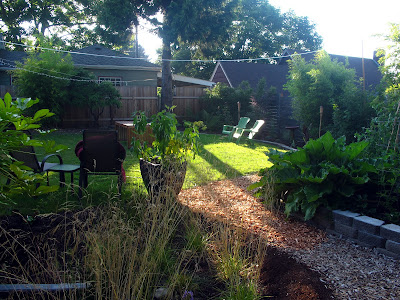 We tucked the pole behind the flowering currant and have plans to sink another one behind the Cryptomeria. The pole bends a bit from the tension in the rope lights so we may run a counter-wire behind it to pull the pole back a little. 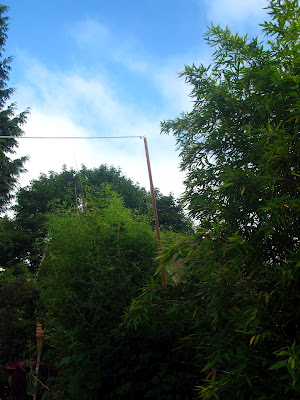 When we're done we can throw the pole in the garage and cap the DWV pipe so it doesn't fill with debris or water. Not bad for $15 and an hour of labor. The globe lights will be more expensive but I think they'll look even better at night. We're slowly classing this joint up. 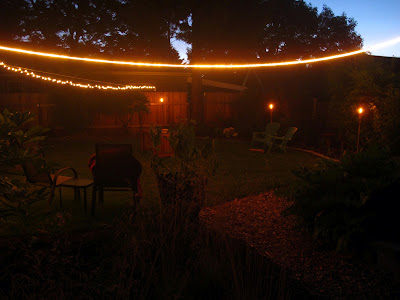