That money isn't going to spend itself

Several months after I moved into the house I moved a piece of plywood that was over our basement floor drain and noticed that when the washing machine emptied, it made this happen:

I ran some hot water and vinegar down the drain and that helped a lot but it was still backing up onto the floor. It's never been high on my list of things to spend money on because it doesn't really hurt anything and it looked way too gross to snake myself (plus mine's not long enough) and getting a pro in costs $115, and do you know how many plants that will buy?

I don't know why but I finally started worrying about it and the money in my checking account isn't going to spend itself, so I called Grumpy's Drains and they sent someone out two hours later. 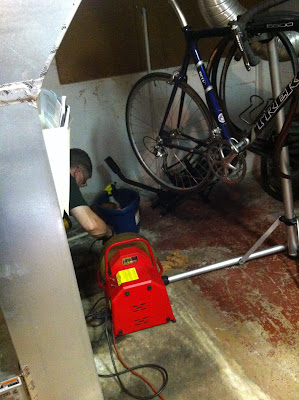 He was very nice (I WANTED THE GRUMPY GUY) and he said our floor drain is still in good shape, though they generally only last 50-60 years. Mine will be 75 next year! He gave me the number of a trustworthy contractor, in the event that it does finally give up. And then I snapped one of those fancy $3 covers on it. Like a grown up. 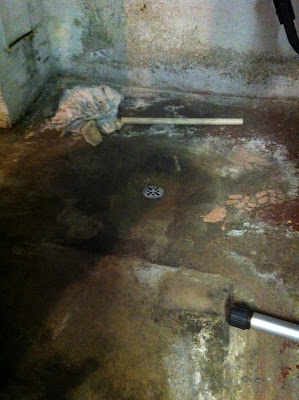 On a semi-related "things in the basement" vein, I've been using an iPhone app that I really like called "Time Flies." It cost $.99 and it has a very simple interface to keep track of things you don't do very often. I use to track when I flush the water heater, change the furnace filter, apply fish emulsion in the garden, or clean the gutters. 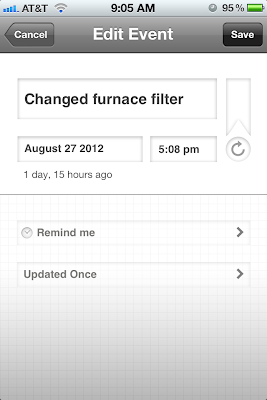 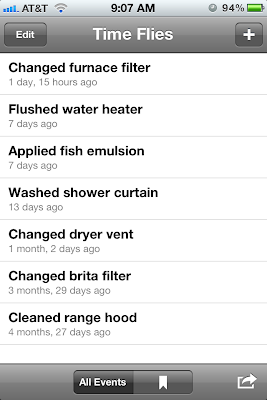 It doesn't remind you to do anything but it will tell you how long it's been since you cleaned the range hood (really? it's been that long?). So if you know you're falling behind but maybe don't know how far behind, this one is for you.
Posted by Heather