In the backyard I have a mature Western red cedar that has thwarted all my under-planting attempts. I've tried a number of natives, few of which have thrived. Of course, I never bothered to plant things that could survive with almost no water. One lonely hosta looks great until August, at which point it dramatically keels over. The sword ferns are happy but everything else malingers. It's my fault. 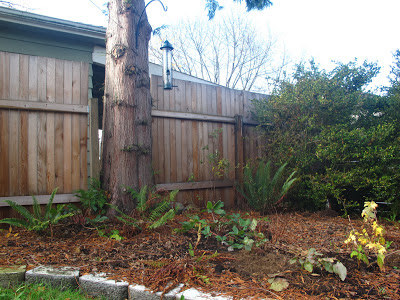 There are sad neglected boxwoods in the corner that I leave only because they're evergreen and they live despite getting no water. I really want something large to fill the space in the foreground but I've yet to find a medium shrub that can handle dry shade (but sometimes hot summer sun!) and fierce root competition. My next attempt will be gro-low sumac (Rhus aromatica), which won't get quite as tall as I want, but should be able to survive here.

I consulted with a guy at Joy Creek about ground covers because my wild ginger just never took off here. He suggested hellebores and epimediums, so I'll try that, damn it. I moved my hellebores here and thus far they are doing great. 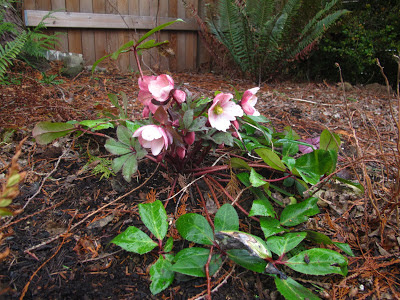 I searched high and low for an epimedium I liked and found one called 'Black Sea.' It's supposed to turn almost black, which I thought would look great interplanted with Hakonechloa macra. The only problem is that this epimedium turns black in winter, when everything else is dormant. You can't even see it, it melds with the mulch so well. During the warmer months it turns a very unremarkable shade of medium green. And I planted hakonechloa eight feet away. It's like I'm not even thinking, some days.

So I'm not quitting my day job. What other dry shade (but sometimes hot summer sun!) workhorses am I missing?
Posted by Heather