Oh man, you guys. This summer. It feels like it will never end and I want it very badly to just go away. Between The Fling, many house guests, multiple parties, and a lot of work and non-work trips, I spent the least amount of time working in my garden since I bought this house. It shows, too. There are weeds everywhere and for the first time in my life I just couldn't bring myself to care. People would come over and I'd be like, "That's where we keep the dandelions. Over there, too." There's red oxalis everywhere, weaving itself especially tenaciously around anything with a spike or a poker.

I visited a lot of open gardens this summer, far more than I usually do, all of which made me hate my back garden even more than I normally do. Instead of inspiring me they mostly filled me with frustration. Greg and I are still arm-wrestling over hardscaping and the placement of a deck, which puts any garden expansion on hold. I swing wildly from wanting it to look better NOW to feeling like this is all an experiment and I don't have cancer (yet) so what's the rush? I'm not a landscape designer, I have nothing to prove. But I want better.

The front yard remains in my good graces, mostly because it doesn't require much watering and it's always full of bees. The color scheme is a little whacked out but I like it. 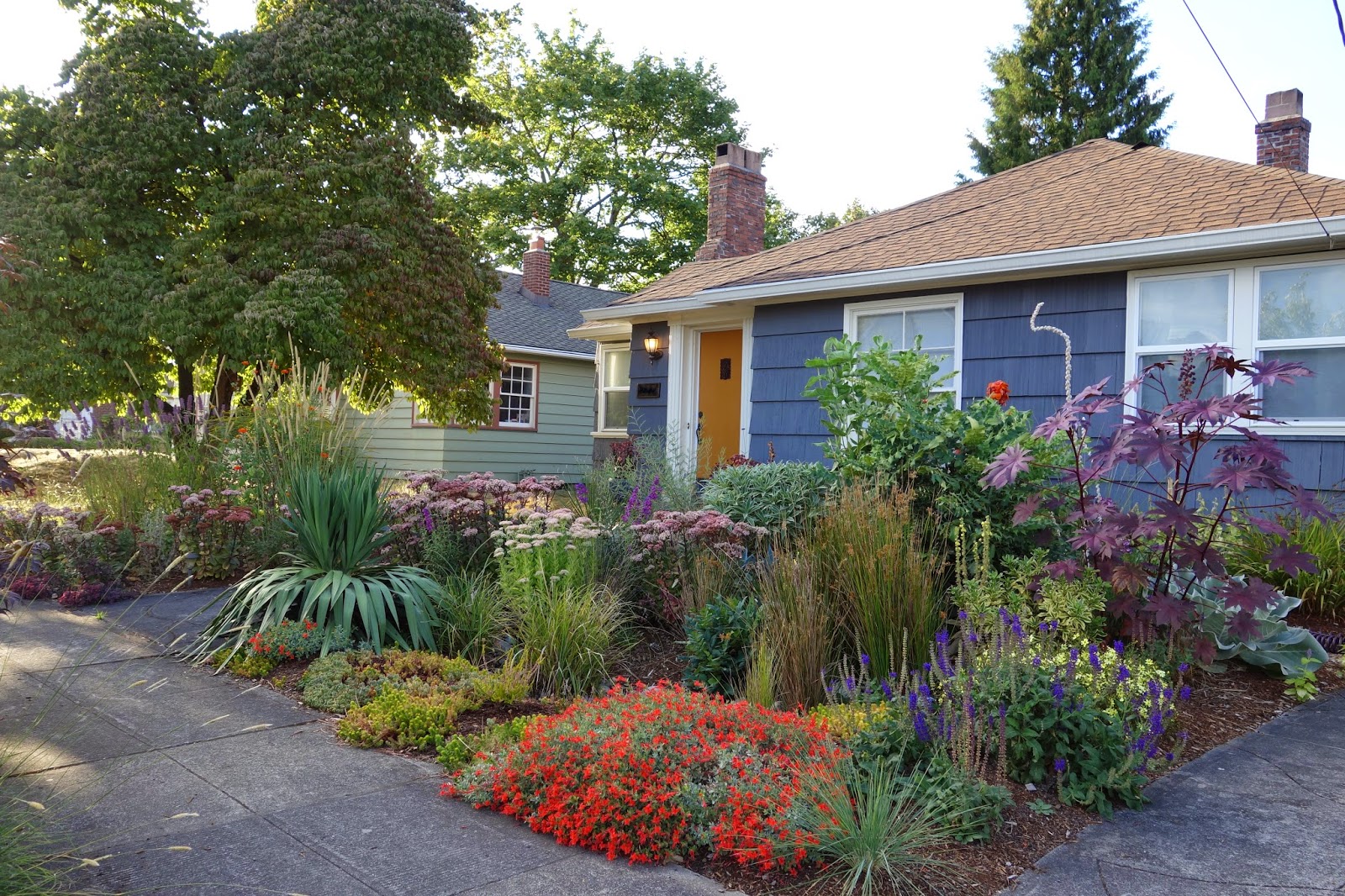 But. The meadow has been driving me crazy, mostly because I placed the plants all wrong initially. At first I put all the Schizachyrium scoparium 'Blue Heaven' in the front and they got so tall that they blocked everything else behind them. 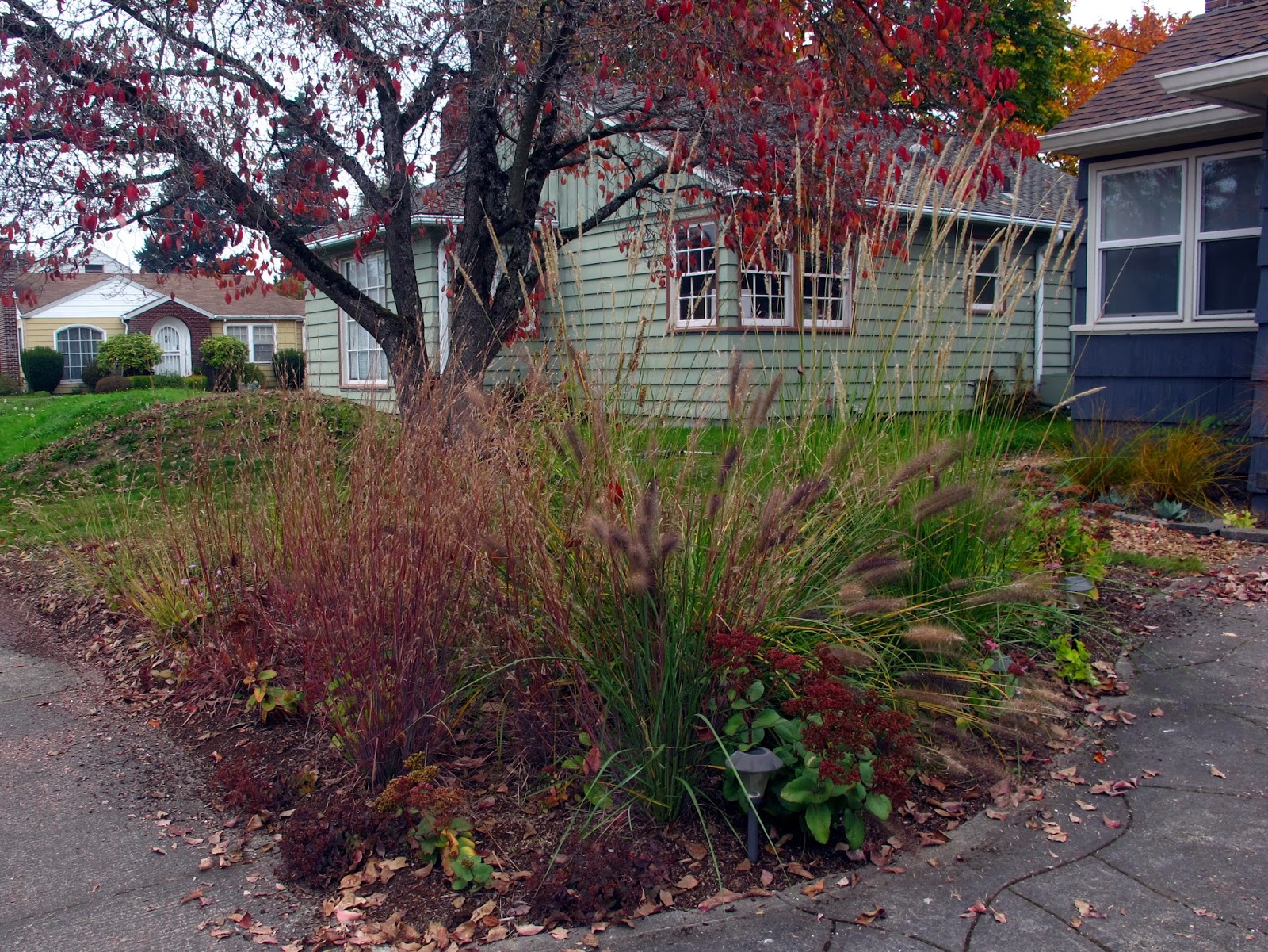 So I moved them to the back of the meadow even though I knew they wouldn't get enough sun there. But I was like, "Let's see what happens!" And what happened was they didn't get enough sun so they stayed tiny and they didn't bloom. It was shocking. Luckily I also planted Sedum 'Matrona' all along the front of the bed to give it some structure, which I think actually worked. One step forward, two steps back.

After getting a week of rain recently I went out with my pickax and started moving things around. The Pennisetum macrcorum 'White Lancer' (with the tall white seedheads) got moved closer together, since it seems more interested in running than bulking up. 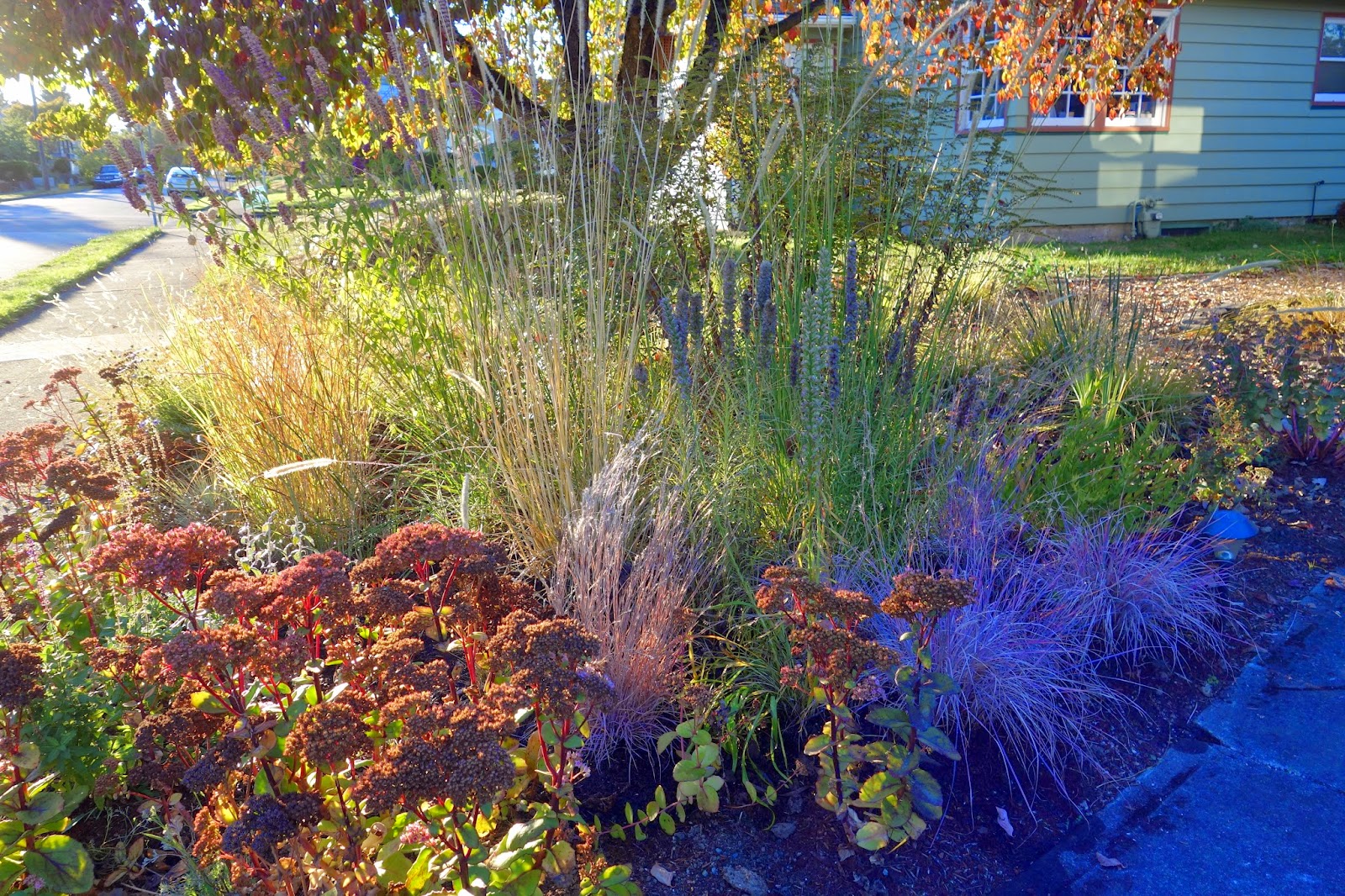 Then I had room to move the Blue Heaven back into a sunny spot, seen here on the right-hand side. I also put in three of the tall Liatris spicata, which is common as dirt but I love it. I had hopes to incorporate some redder hues in the form of Centaurea atropupurea but I just learned from Grace that they get a lot taller than the tag says. But you know what? This is all an experiment and I can tell you about moving them next fall! It will be great.

I'm also moving one of my most beloved agaves out of the gravel berm and into the mulched hinterlands. 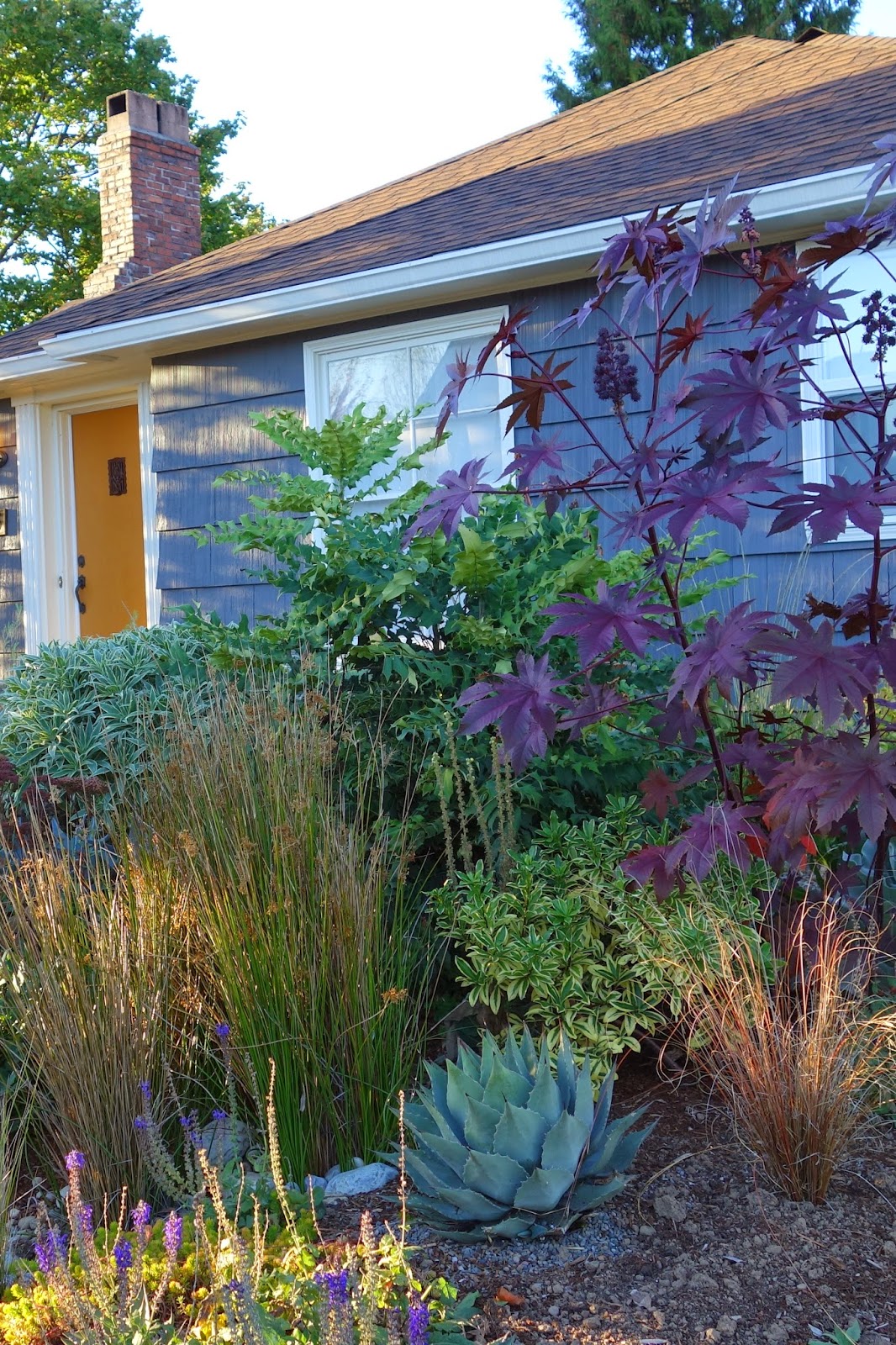 This is my second largest agave and it's pretty big for the Pacific Northwest, so I'm keeping everything crossed (I caught myself calling it "baby" while I moved it because I love it so much). I've been wanting something in this area that is evergreen with visual heft and I thought it might do the trick. He has two smaller companions nearby. The good news is that I have something to worry about obsessively this winter! Are my babies rotting out? Should I wander into my front yard wearing the yoga pants with the ripped out butt to check on them? 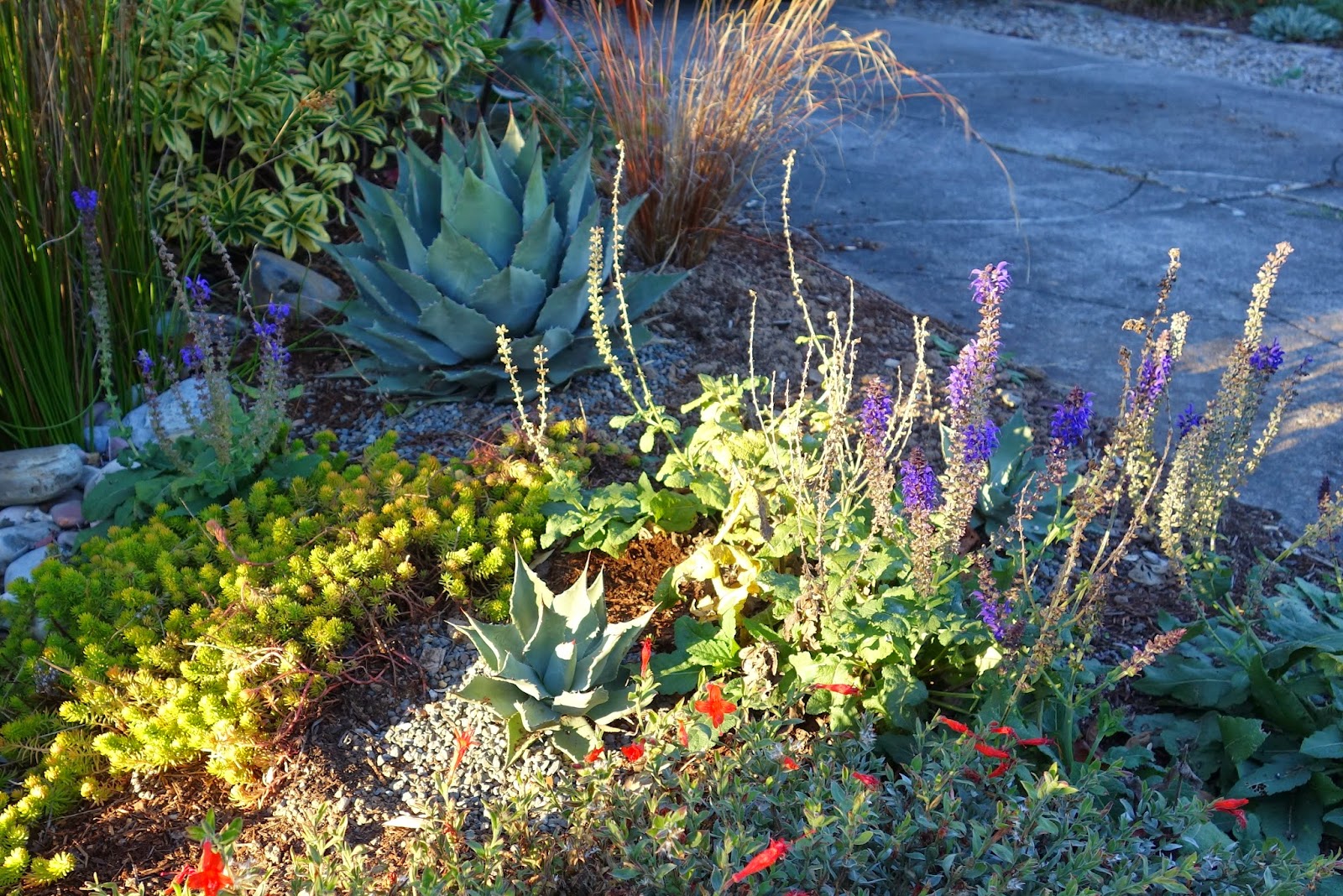