One of the things that kept me tossing and turning the night before I put a bid on my house was the furnace.  It was original, it was huge, it was most likely not in working order.  It would probably cost between $3000-5000 to replace. 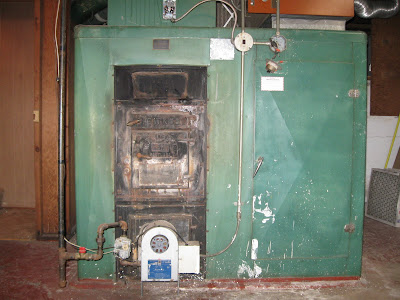 Fun little aside: when you buy a house people will walk through your house, pointing out things that need fixing.  Then they pick a number out of thin air and tell you that's how much it will cost to fix.  It doesn't matter if they own a house or not, whether they have actually completed the project in question, they will have a figure for you.  They'll sound like they know what they're talking about. 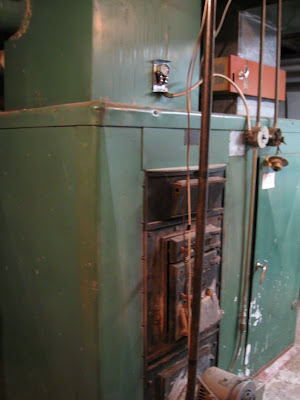 I always nod and then double the amount they say in my head.  This has worked almost every time.

But back to the furnace.  I knew it was going to be expensive, I just didn't know exactly how expensive.  I really grappled with whether to buy a house that needed a new furnace right out the gate.  I called two sets of friends, both couples who had bought a house in the last five years and had done a lot of fixing and remodeling.  They both assured me that this was not a deal breaker, that most houses in Portland would need a new furnace soon.  They totally talked me off the cliff and I so appreciated it.

I brought in a few bids for the furnace.  The first one was really expensive.  The second one was from Jacobs and they created a bid for a high efficiency furnace, as well as a standard 80% efficiency one.  With the current tax refunds, I could get  $1500 back from the federal government, $350 from Oregon, and $100 from the Energy Trust if I bought the high efficiency furnace.  Conveniently, the high efficiency furnace was about $1900 more than the 80% furnace, all of which I could recoup with the tax rebates.  I decided to do six-months-same-as-cash financing so I could put the set-aside furnace money in savings to earn a little interest.  This also gave me a cash reserve, should something catastrophic happen with the house. *knock on wood*

Once I had that figured out I scheduled to have the new one put in.  I opted to remove the old furnace myself because this would save between $500 and $1000.  By "remove it myself" I mean "call the guys."

The guys, they are amazing, beautiful friends.  But let's look first at the old furnace.  It was sort of beautiful in that I'm-from-1939 kind of way. 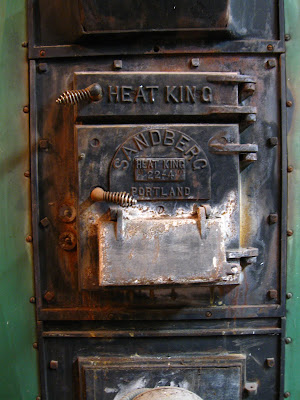 Are these guys still in business? I doubt it. 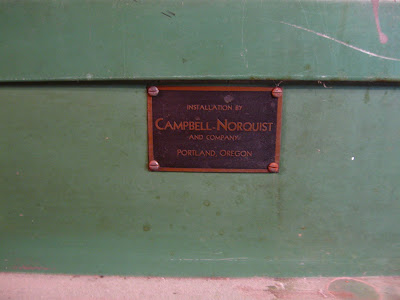 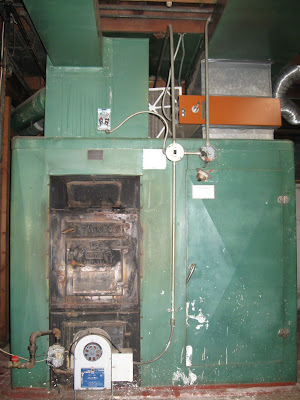 I made a huge breakfast, I bought a lot of beer, and I borrowed two sawzalls, an angle grinder, and a sledgehammer.  I also bought safety goggles and work gloves.  I made vague promises of destruction and demolition. 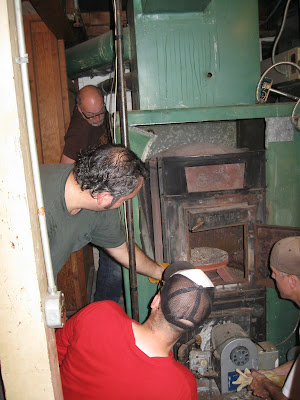 Unfortunately for the guys, they didn't get to use the sledgehammer.  They mostly got to use wrenches and screwdrivers.  We needed to keep the shell of the furnace intact so the ductwork wouldn't collapse, so they mainly labored on removing 70 year old bolts. 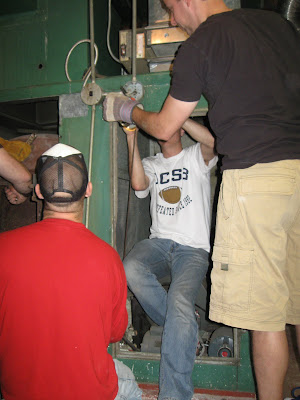 And oh my god, you guys, there were approximately 90 million bolts on this thing. 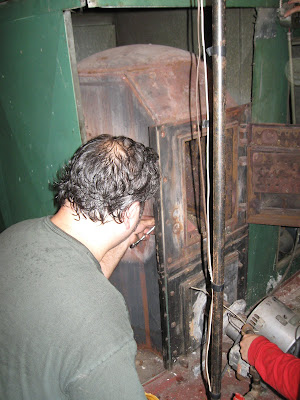 Stephen was SO AMPED to use the power tools.  Whenever a bolt was especially difficult to remove he would ask, "Should we use the angle grinder?"  I think they did actually use it twice, which was about 1000 times less than they would have liked. 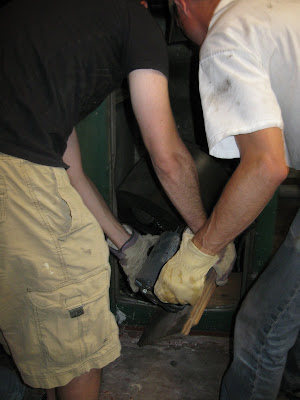 I'm not going to lie.  My basement smelled like a locker room. 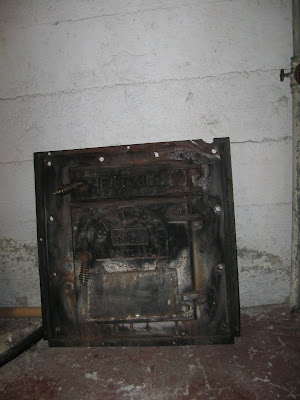 Once they got the door (which I kept) off  the front, they had to deal with the main burner.  Is it a burner?  The big heavy thingee. 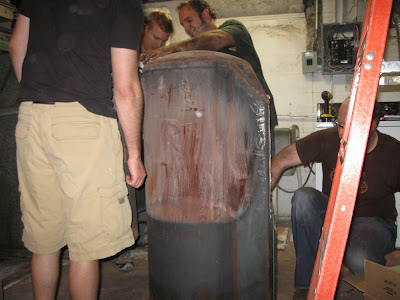 We estimated this thing weighed about 750 pounds. I started to sweat about how we were going to get this thing out of the basement. 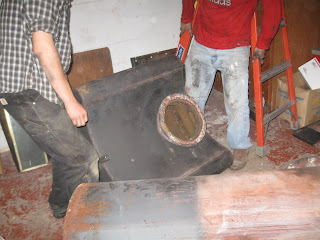 We got this flask-y looking thing off the back (more wrenching) and called a scrap metal collector from Craigslist.  He jetted over with a truck and a heavy duty dolly.

The six of them hauled that monstrosity up the narrow basement stairs, which was the most terrifying thing I've had to endure in a long time.  There is nothing worse than having to watch people do something dangerous when you can't help in any way, save from yelling, "Be careful!" 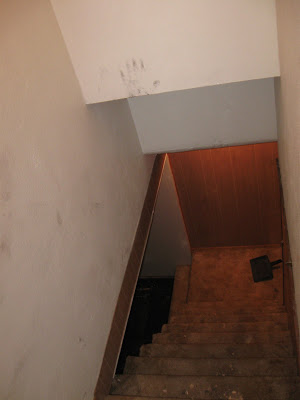 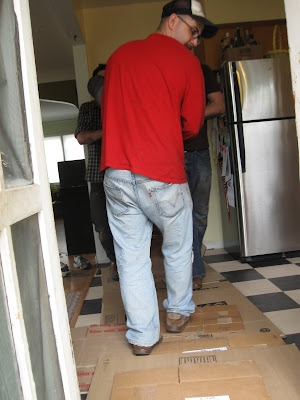 These sweet men labored all morning removing this thing and they were still so cautious about my new kitchen floors.  Scholars and gentlemen, every one of them. 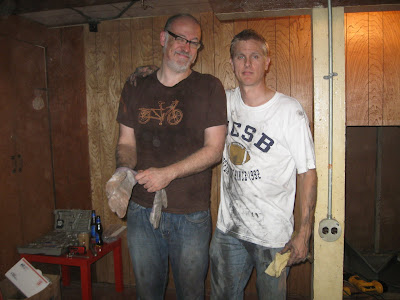 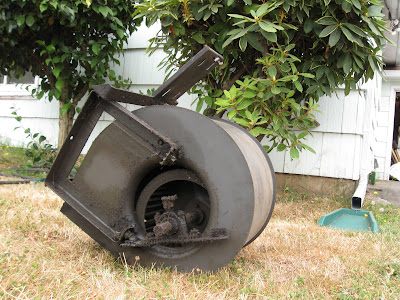 Z ran 13 MILES before he came over to help and he still had strength to play air guitar.  Badass. 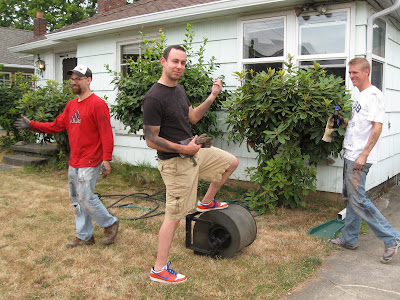 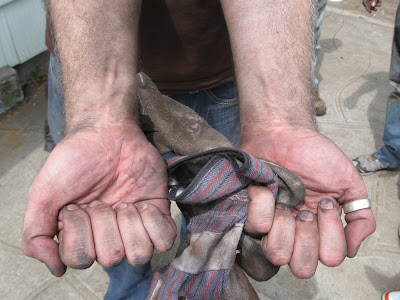 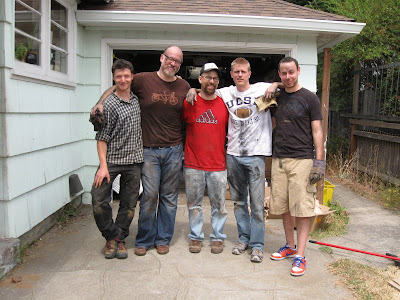 The whole process probably took about two and half hours, start to finish.  If I had to do it all over again I would not have asked my friends to do this.  The burner *did* end up containing asbestos and we were not wearing masks.  I will feel guilty about this forever and ever.

Now it was all ready for the new furnace to be installed. 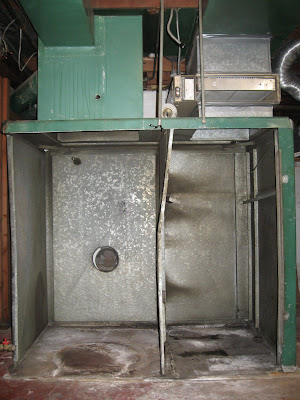