Adventures in plumbing or why you should never use Drano

My parents came to visit me for the weekend and to see the house for the first time.  It was awesome.  They flew out on a Monday morning and I took the day off so I could go to breakfast with them and then unwind from the busy weekend.  I planned to do laundry and then watch a lot of DVDs in bed, maybe read a little.  I went to breakfast with them, raked my yard, and started a load of laundry. 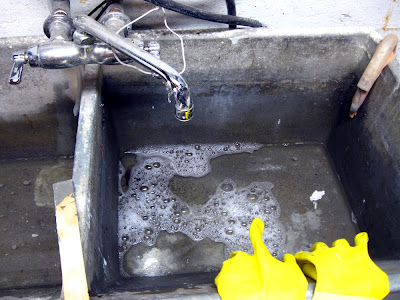 My washing machine has a good old-fashioned hose that hooks over the side of the utility sink in the basement.  So all the lint and hair and general yuckiness that comes out with the gray-water goes down the sink drain.  In one of my last places, a 1920 Victorian, our basement sink was constantly clogging because of this.

My basement sink has always been slow and one side was essentially clogged.  With my laundry chugging away I decided to snake the left side of the sink a little.

Big mistake.  I have no idea what I did but instead of a slow drain I now had a blocked drain.  Like, really really blocked.

Backstory: this incredibly heavy cement sink has a lot of cracks in it.  When I moved in I used Drylok to patch the cracks.  Drylok is a cement-like product that dries quickly and can be used on active leaks.  It dries so fast that you better have everything ready to go before you add water or you'll end up with a paperweight in about two minutes. Back to the clogged sink, I decided to grab some Drano from the store.  It worked when we lived in the Victorian, it would work now, right?

It turns out Drano melts Drylok. It melts cement!  IT MELTS CEMENT.  So I had two full, backed up sinks that were now leaking Drano and water all over my basement floor.  It was like a nightmare. 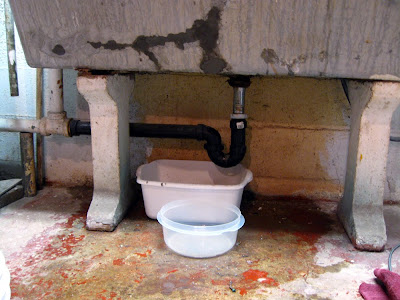 Once all the water had finally drained out the cracks, down the floor, and into the floor drain (thank heavens that didn't decide to clog), I knew I had to take the P-trap apart and break up whatever clog was there.  I had a metal snake (just like this one) but I'd never used it before.  I took the P-trap apart, hoping that the clog would be IN the P-trap.  That would be really easy to fix.
It wasn't in the P-trap.
It was about four feet into the drain.  I had a really hard time getting the snake past that section.  I had to poke a little, twist the snake, poke again, hoping I was finding a weak spot in the clog.  Then I tried to rasp the snake back and forth along the clog, hoping to break it up.
This is the part where I tried unsuccessfully to break up the clog using just my hands and the snake.  It didn't work and I ended up telling the roomie, "Don't do laundry," going to work, and attacking it the next day.  Long story short: you need to spin the snake to break up the clog.  I used my cordless drill. 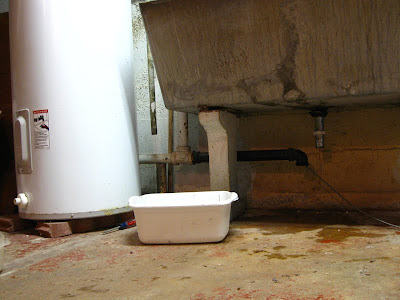 Feed the snake in gently, past the clog. 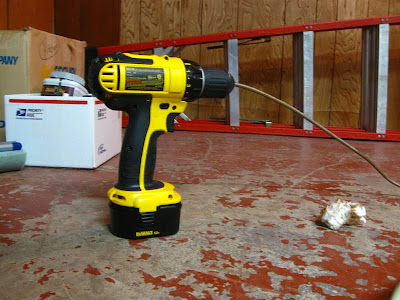 Attach the end securely to your cordless drill and start spinning, slowly at first.  I spun the whole length of the pipe, then moved the end of the snake to where the big clog was (you could still feel it in there, pulling on the snake), and spun it again.  All sorts of gunk came out with the snake but I won't post pictures because this is a family blog, but know that it was all very dry-heavey and sort of fantastic at the same time.  Then I put the P-trap back together and ran gallons and gallons of very hot water down the drain. 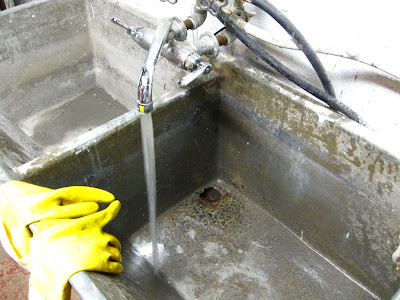 Hallelujah!
In doing some research while my sink was slowly draining Drano and water all over the basement floor, I learned that This Old House recommends the following plan of attack with clogs in old houses:
1. Plunge the drain.  This will often break up whatever is down there enough to flush it away.
2. Snake the drain.
3. Flush the pipe with copious amounts of hot water.
4. Call a plumber if these things don't work.
Nowhere do they ever recommend using Drano.  LISTEN TO THIS OLD HOUSE, ya'll.
Posted by Heather