How to paint your fireplace

Do you want to update your grimy old fireplace?  A coat of paint is a good option, particularly if you're never going to use the fireplace for fire.  These bricks would look lovely with a coat of white paint. 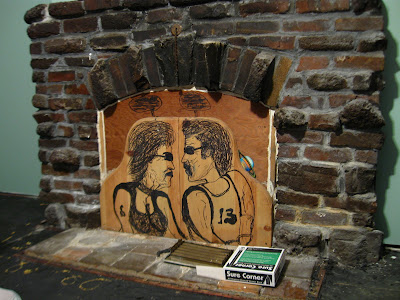 Before you start you'll want to make sure that you put all the paint cans you've ever used (empty or full) in the basement, regardless of whether you'll need them. You'll want to trip over these later, especially since you'll be wearing contacts that are the wrong prescription, making walking a little tricky.  That's just the price you pay so your glasses aren't fogging up constantly with a ventilator mask on your face. 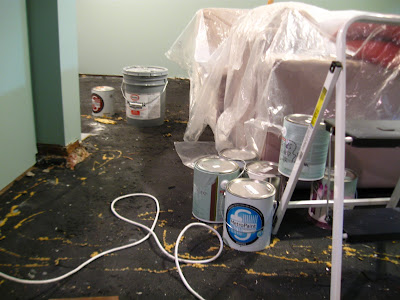 You'll also want to plan a dinner party for the evening.  Decide that morning to make homemade bread, despite the fact that you've *never* made an edible loaf of yeasted bread before.  Tonight will be different.

You'll want to remove the tack strips that surround the fireplace hearth, lest you accidentally kneel on one of those upward facing nails.  They were left from when you removed the carpeting.  Grab your handy floor scraper and start to loosen the rotting wood.

Accidentally take out half of a hearth stone with the floor scraper.  Whoops. 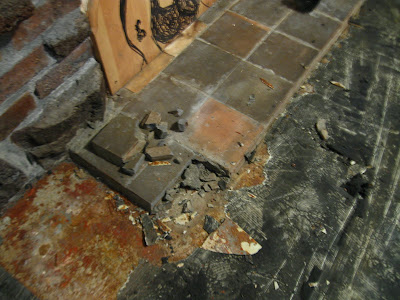 You know what?  You never liked those that much and they aren't original to the house, so let's just get rid of all of them. 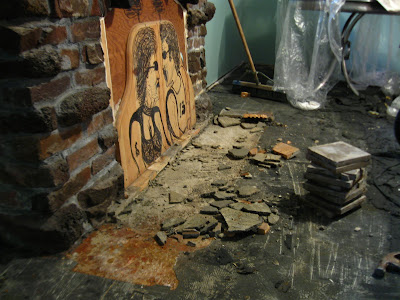 Some of the vinyl glue-down tiles popped off when you were scraping, so just scrape a few off around the fireplace.  You'll want to leave the rest alone because scraping up all the tile in the basement would be crazy.
Shhhh . . . did you hear that? That was your friend Carrie, screaming "ASBESTOS IN THE VINYL TILE!" from a mile down the road.  But it's okay; you're wearing a mask and you're only removing a couple of tiles. 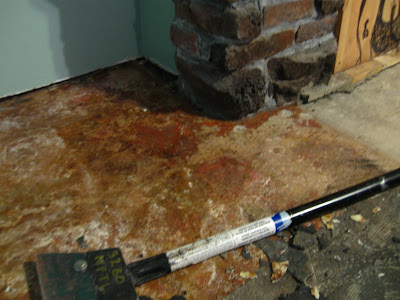 Crap.  That looks like water. Just a little bit, but water nonetheless.  Decide to switch to pulling up the tack strips that run along every wall.
But first, run upstairs to do the first kneading of the bread. Finally read the recipe in full and realize that it requires FOUR rises and the bread won't be ready to go into the oven until 8 pm, never mind that you need to cook the chicken and the veggies too, all at different tempuratures.
Add "baguette" to your shopping list and return to the basement.
VERY IMPORTANT: put on the grimiest pair of work gloves you own so that you're sure to leave the highest number of smudges and smears on your freshly painted walls.  If something is worth doing, it's worth doing three times because you couldn't be bothered to be careful. 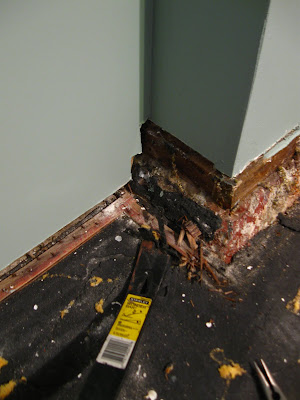 Wedge your prybar under the rotting wood and try to wrench it free from the basement floor.  Ding the drywall you so painstakingly mudded and sanded and primed and sanded and painted as many times as possible.  Once you finally have all the tack strips up, scrape some more tile from the SW corner of the basement, realizing that there's water in other areas, too. 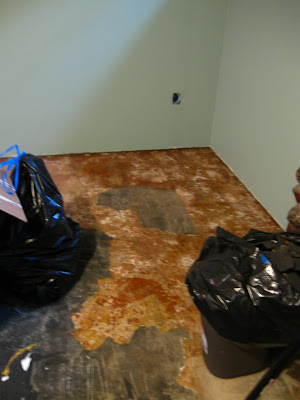 Realize that you really should scrape up all the vinyl tiles and put down some sort of sealant before you install the laminate flooring.  Sweep up as much of the vinyl tiles as you can and get them outside because they probably contain ASBESTOS, OH MY GOD, ASBESTOS and then use your shop vac to clean up all the debris you left.  Try to clog the shop vac as many times as possible.
Hint: it's more times than you'd ever think possible.
Spray a bleach solution on the exposed concrete in the worthless hope that this might take care of any mold issues in the basement.  The hallmark of good home improvement is a smelly house, especially if you have guests coming over that night.
Marvel at your updated fireplace.  Isn't it lovely? 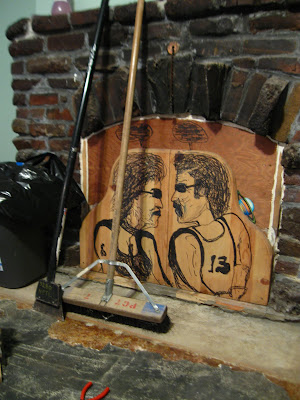 The baguette?  It was delicious.
Posted by Heather