Man, have there been a lot of earthquakes lately or what?  Haiti, Chili, Mexicali, Spain . . . in Oregon we're right on the area where the Juan de Fuca plate is being subducted by the North American plate.  Basically, two plates are pushing against the other, creating increasing pressure.  Eventually the pressure hits a crucial point and one plate jumps a little and moves over the other.  The North American plate is overtaking the Juan de Fuca plate and all that action is taking place along the Oregon and Washington coasts.

I love dropping this knowledge at parties. Before I went to library school I intended to become a geologist.

They estimate large earthquakes happen because of this subduction every 300-500 years.  The last one, the Cascadia quake, caused a huge tsunami in Japan and widespread damage in the Pacific Northwest.  It took place in 1700, so we're due.

I've been meaning to put safety straps on my water heater so it wouldn't fall over in the case of an earthquake.  I finally got around to buying the straps but then I was stymied by the cement walls in my basement.  I didn't want to create a potential water leak by drilling into the cement walls.  I decided this was one of those things I should hire out.  At the very least, if they make it leak I can call them and make them fix it until it's right. 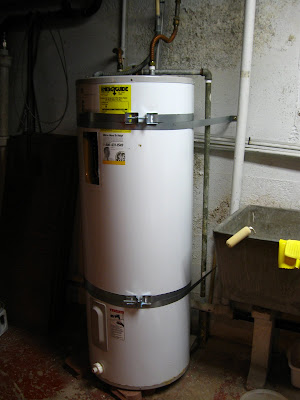 I used Neil Kelly and the carpenter they sent out was absolutely the NICEST skilled laborer I've had at the house (and I've had some really nice ones).  He waterproofed the bolt holes with some sort of tar-like substance.  He also cut PVC piping to measure so the water heater wouldn't rock and hit the wall.  I definitely wouldn't have thought to do that. 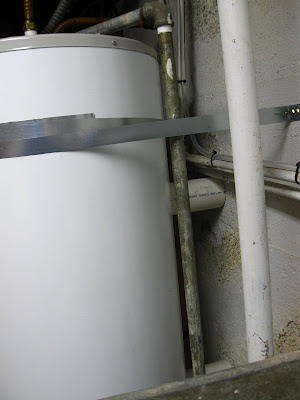 All told it took an hour and $105 to complete.  Since I was already down there I decided to finally flush the water heater.  They recommend doing it once a year to get rid of the sediment that builds up at the bottom of the tank.  You just cut the power, grab a bucket, and open the valve at the bottom.
Commence brown yuckiness! 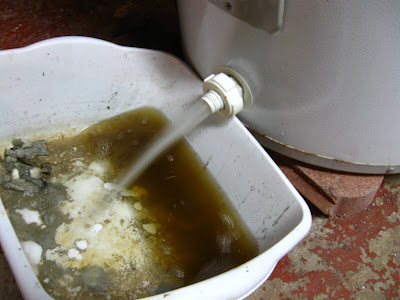 Here's to hoping all this is unnecessary and that the big one doesn't hit for another 100 years, hopefully after we've retrofitted all the bridges in Portland!
Posted by Heather