Chestnuts roasting on an open fire

A few times back I lived in a house with a wood stove and it was, to be a tiny bit hyperbolic, the best thing ever.  Because my house was a foreclosure, we had no idea if the chimney worked.  I guessed, based on the amount of deferred maintenance on the house, that it should be cleaned and inspected before I used it.

I finally had the money to have it looked at right before Thanksgiving.  Walt from American Chimney & Masonry came out and he got REALLY EXCITED because apparently my chimney had never been cleaned.  I'd wander out to get more coffee and Walt would grab me and make me look at the mounting pile of soot that was accumulating.  Look at it!  Look at all of it!

He informed me that the damper in the basement fireplace was deformed and stuck in a permanent open position. 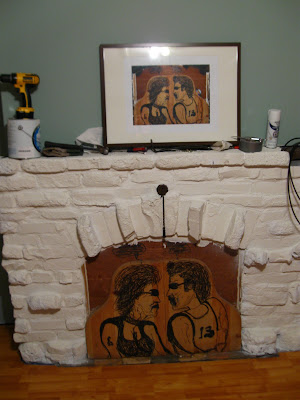 Which means these guys actually serve a purpose, aside from being awesome.  No cold rushing air or murderous birds shall pass Hall and Oates.  For the low low price of $469 I could have a top damper installed and the basement fireplace would become usable.  Walt started getting excited and I had to be all, "Whoa, buddy. Why would I want a usable basement fireplace when I could have awesome artwork instead?  Also, I don't have $469."
So instead he just cleaned the upstairs fireplace.  He also recommended acquiring a large pipe to use a wedge for the upstairs damper.  The damper is original, really freaking heavy, and being held open by a weak chain.  He couldn't replace the chain; the recommended fix is another top damper.  A pipe, in addition to being stylish, is $8 at Lowe's.  If the chain should break mid-fire, the pipe would keep the damper open and we wouldn't all die of smoke inhalation.
So we got a fire going on Thanksgiving and all was well until I went into the basement and it was filled with smoke.  We extinguished the fire and got a number of brains on it.  We speculated (a little tipsily but IT'S OKAY TO DRINK AT NOON ON THANKSGIVING) that maybe the smoke was going up the living room chimney and getting sucked down the open flue of the basement chimney where Hall and Oates were clearly slacking on the job.  We sort of shrugged our shoulders until dinner when Carrie, my scientist friend (who had missed our conversation), was like, "Oh, of course! Science, air pressure, smoke density, basement, beep blop bloop," and we were like, "ohhhhhhh."
So yeah, I still can't use my fireplace.  But!  Bill and I were watching Boardwalk Empire, HBO's newest show, and The Commodore, who plays the former boss of Atlantic City and lives in a crazy mansion with all sorts of Victorian furniture, has my same fireplace screen! 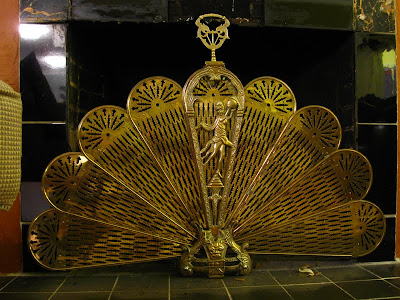 Edited to add: proof!  In a terrible photo of the TV! 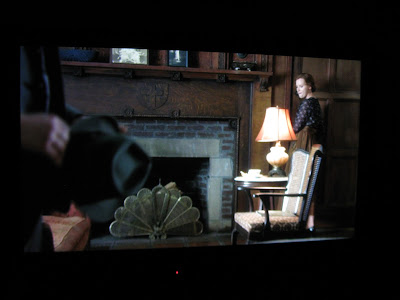 I feel so hip.
Posted by Heather