How to build a franken-deck

Our back step had gone from being softly rotting to actively dangerous. If you didn't step exactly in the middle of the step the whole thing would cantilever over to the side and pitch you into the bushes. We eat outside every night and we both started to feel like we were tempting fate, having someone as clumsy as me going up and down it in semi-darkness, usually with my hands full. 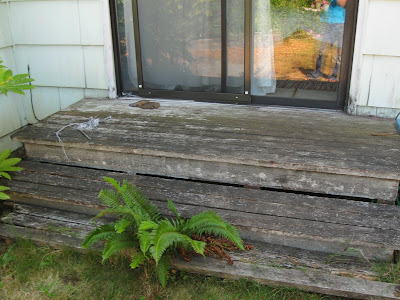 My sister came this weekend and took fancypants pictures of my dried-out garden! We ate crawfish and relaxed in the backyard and drank too much champagne. 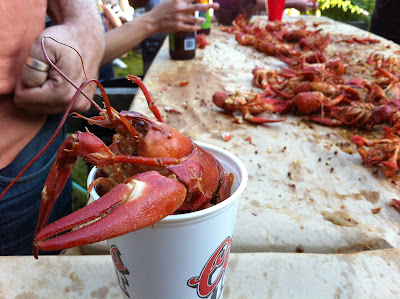 At one point she asked us, "Wait. You don't have kids. What do you DO all weekend?" And we were like, "Whatever we want. Nothing or a bunch of stuff." Actually, Sissy, this is what we do. We build franken-decks. 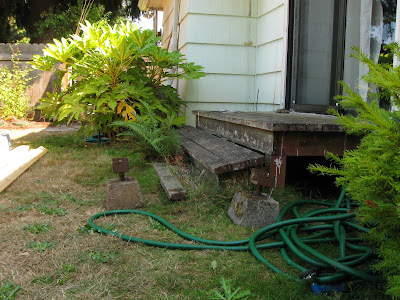 You'll want to remove the old rotting stairs, taking care to salvage the fern growing under them. You already have thirty ferns in the yard but that's not enough. Swear when a wasp comes flying out from underneath the deck. In case there's a nest under there, dig out the can of Raid from the basement. Put on a hoodie and gloves and watch as Greg arms himself with nothing but a hammer. Welding a hammer instead of protective clothing isn't stubborn at all, GREG. I'm sure that hammer will protect you against a swarm of stinging insects.

We're all good! There's no nest. There IS a pair of socks, a Pepsi bottle, a Ball jar, a broken coffee cup, a yogurt container (Yoplait strawberry), and a can of A&W cream soda. The former home owners were hungry and a little bit sloppy, apparently. 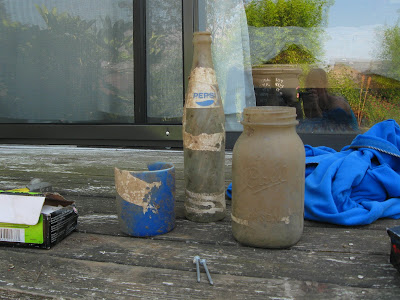 You know what else they were? Lazy. These posts aren't sunk into concrete. In fact, they aren't connected to the main platform in any meaningful way, they're just kind of wedged under there. Cheerfully remind each other than this is a stopgap measure, and that you're going to replace this whole deck next summer. Drive some extra nails into the posts. 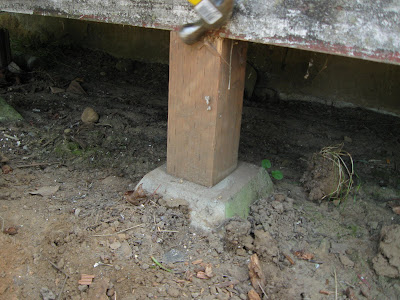 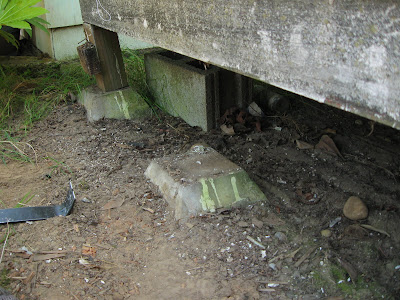 Decide to use two of the old piers you found in the yard and two new piers, just to make the measurements more complicated. Start digging a hole and realize you didn't buy enough gravel, prompting your second trip to the Home Depot in less than an hour. Make sure to forget your phone! When you're en route and you're thinking, "He might need me to pick up something else, I should turn around and grab it," ignore that impulse. JUST KEEP DRIVING. 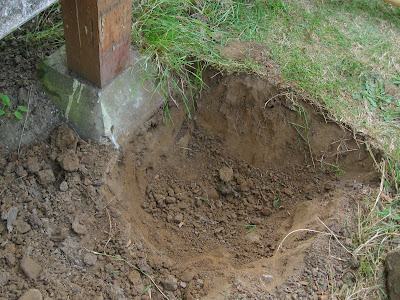 Get home and learn that you need a different kind of bracket. Head to Lowe's this time, just for variety. Take your goddamn phone this time, okay? Enjoy the fact that you're driving around in air conditioning while Greg is digging holes, tamping gravel, and measuring things in the blazing sun. This is kind of the best thing ever, actually. Get back just as he's finishing up the crossbeams for the new step. 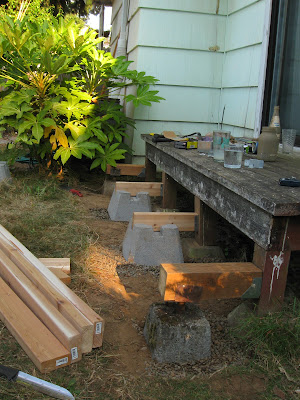 Your timing is excellent. 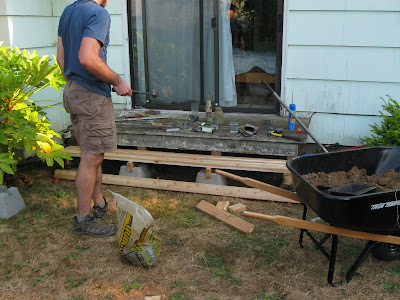 Decide that you should actually help build this thing. Here baby, let me nail in the treads. Be sure to drift! Greg didn't labor all afternoon just to have you drive nails in a straight line. Also, don't pay attention to the boards moving out of line. 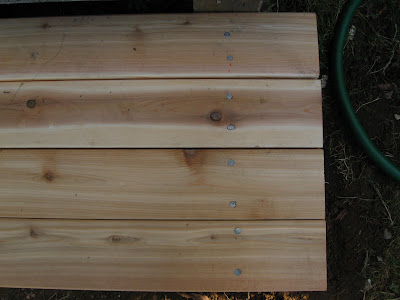 Decide to reclaim the facing board from the old rotting step, just to give it more of a shabby chic feel. Also: bragging rights. Oh, you bought new wood for your deck? We reclaimed wood from the old one because we actually care about the environment. Get an uncontrollable case of the giggles because it looks so franken-decky. That's okay though, because the new step is SOLID. 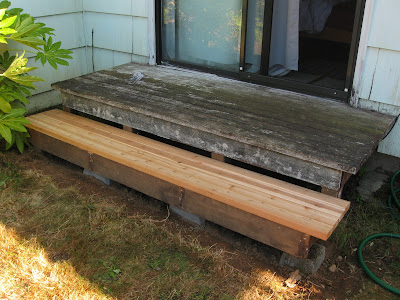 Eat so much chicken at dinner that you suspect Greg is wondering if you're pregnant. (dude. no.) Driving to the hardware store that many times and hauling bags of gravel is tiring! Never mind that he did most of the work.

Seriously though, I love doing home improvement projects with Greg. We always laugh a lot and there's nothing more satisfying than putting your arm around the man you love while looking at your completed project and thinking, "We built that fucked-up looking thing together."
Posted by Heather