Again, this has nothing to do with the house but everyone likes looking at other people's vacation pictures, right? When we were traipsing around Amsterdam I asked Greg, "Remember how you used to pull out the slide projector, invite friends over for dinner, then force them to look at a thousand pictures of your vacation?" and he was like, "What? No, my family wasn't weird."

So let's just pretend I crawled back into the scary closet under the stairs in my parents' house (spiders, OHMYGODSPIDERS) and retrieved that screen that weighed a thousand pounds . . . . and all of these photos are Greg's since my camera took a dump. 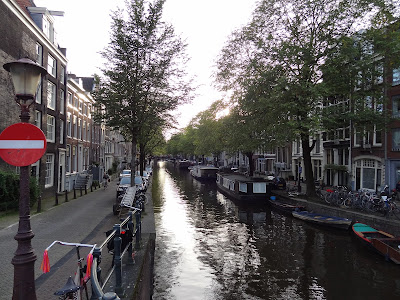 Amsterdam is the Venice of the north! It's very romantic and civilized and there are 650,000 bikes that can go anywhere, making it hazardous to walk if you don't pay attention. Almost everyone speaks English and they are nice about the fact that you can't pronounce anything correctly. And they give you little cookies with your coffee. Free cookies, EFF YEAH, NETHERLANDS! We had spectacular fall weather and I don't think I could love Amsterdam any more. And they have a floating flower market where they tempt you with tulips. I didn't buy any because I had ordered 150 bulbs back in August. And while the bulbs there were cheaper, they didn't have anything you couldn't get online. 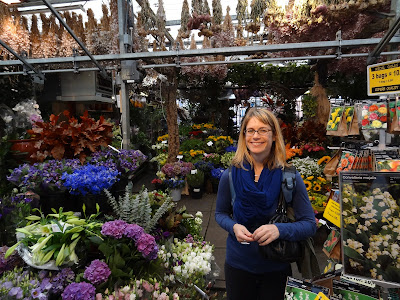 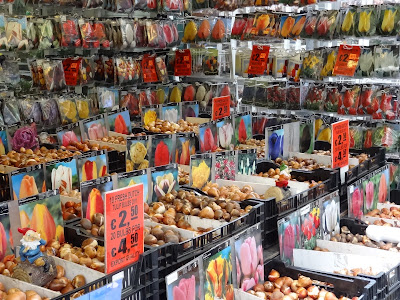 They have a lovely botanical garden and they give you zinnia seeds with your admission. They have a greenhouse dedicated to pokey plants that I wanted SO BADLY. 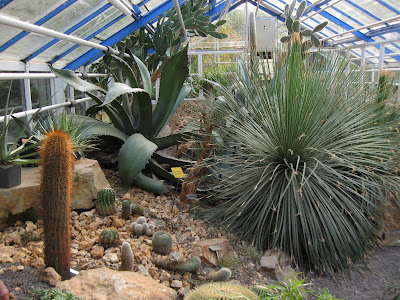 And another greenhouse for terrifying butterflies from hell. When one butterfly floats through my yard I love it. When multiple gigantic butterflies try to land on me? You might as well let a taratula walk across my face. It totally freaked me out. 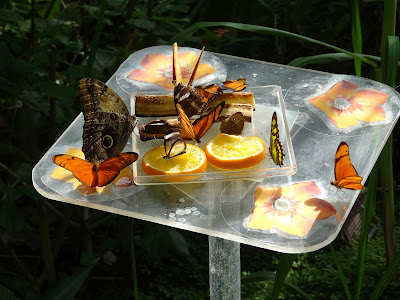 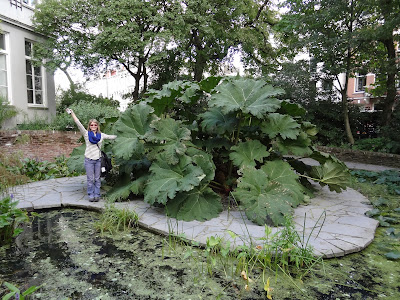 My impression of sunflowers. 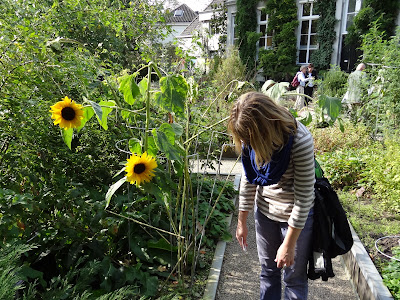 Then we took a flight to Torino where we discovered that travel days make me so cranky I'm almost evil. Getting to Cinque Terre required us taking a train from the airport to the heart of town where we took a city bus to a different train station where we had to take three more trains to get to Cinque Terre. It was very hot, and I am a doughy American used to being chilled while traveling, so the lack of air conditioning on some of the trains made me irritable (WHY was I wearing jeans?). Greg was trying to do things like put his arm around me and I basically told him, "Touch me again and I will punch you in the throat." It was not my finest hour.

But then we got there and it looks like this!


We stayed in Riomaggiore; if I had to do it all over again I would have stayed in Vernazza. The youth hostel is in Riomaggiore, which means lots of 18 year olds more interested in drinking than attempting to speak the language or enjoy what's around them. It made me crazy. Being Type-A in Europe is totally counter-productive, just FYI. 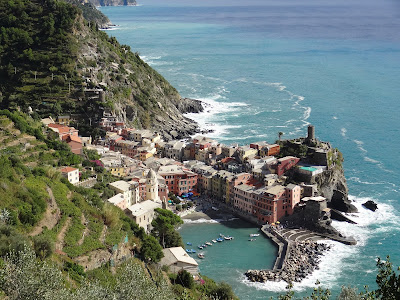 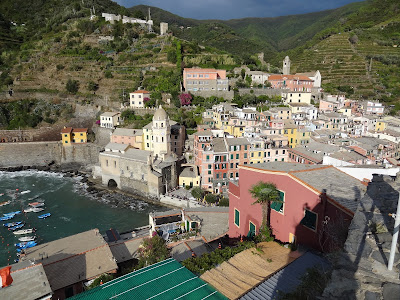 Regardless of where you stay it's very cute and there's not a lot to do except hike around and eat gelato and drink wine and watch the water. One day we walked from Riomaggiore to Manarola along the Via dell Amore. Sayeth Rick Steves:


"[It] became established as a lovers’ meeting point for boys and girls from the two towns. (After one extended closure in 1949, the trail was reopened for a Christmas marriage.) A journalist, who noticed all the amorous graffiti along the path, coined the trail’s now-established name, Via dell’Amore: “Pathway of Love.”

Closing a padlock with your lover onto a cable or railing at a lovey-dovey spot—often a bridge—is the current craze in Italy, having been re-popularized by a teen novel."

I love teen novels and I love locks so I convinced Greg to do it. He even threw the keys in the ocean. Now he's stuck with me! Sucker. 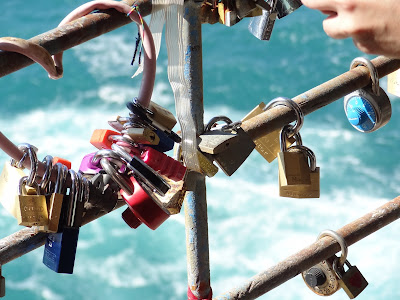 Fun fact: If you stupidly post this photo on Facebook with the caption "We're official" everyone thinks you're engaged and/or pregnant. AS IF I WOULDN'T CHANGE MY RELATIONSHIP STATUS TO ENGAGED AND/OR PREGNANT. Come ON.


We had dinner at the top of a cliff in Vernazza, in a restaurant that slopes noticeably toward the Meditteranean. They opened the clear plastic walls and you could see France going to sleep for the night. We ate risotto di frutta di mare and the owner made us drink limoncello (which they call limoncino in that part of Italy) before leaving.


After two days in Cinque Terre we hopped back on the train and stopped off at Pisa. Again, I was very cranky. We got a little turned around and being lost makes very irritable, apparently. I think Greg started thinking about going on a diving expedition for those keys. 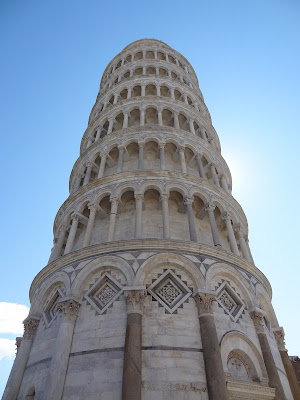 Exactly as advertised, it leans. 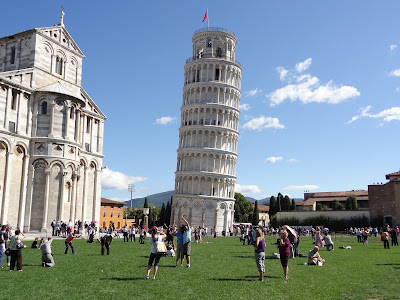 A few trains later and we were in Florence! Florence feels like New York City after Cinque Terre. It's a little overwhelming coming out of the train station. There are people EVERYWHERE. There is sculpture everywhere, there are beautiful vistas everywhere. It's a gorgeous city.

We hit the Uffizi and saw nine million Renaissance depictions of Jesus and Mary. We climbed the Duomo, which was spectacular. I want to live there--they let atheists do that, right? We saw David at the Accademia, which was spectacular. We ate ravioli in walnut sauce that knocked my socks off at Trattoria Nella. There was this huge extended commotion going on outside all through dinner. One man had urinated in the street and the other man didn't like him defacing the city like that so he called the cops. There were heated conversations and shoving and the whole thing was like a giant stereotype about Italian passion. Then we stumbled out of the trattoria and there was a Charlie Chaplin-esque street performer doing a long routine to music. Florence felt like being in The Truman Show, the Italian version. Amazing buskers play while you wander cobblestone streets that are older than your country. It's unreal. 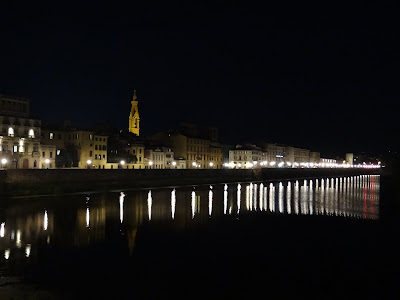 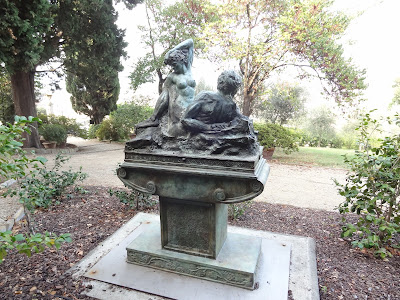 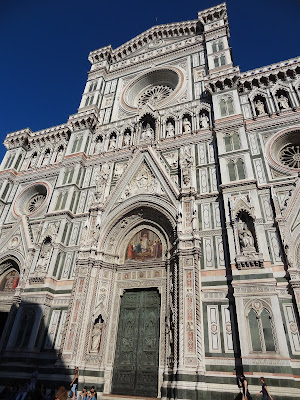 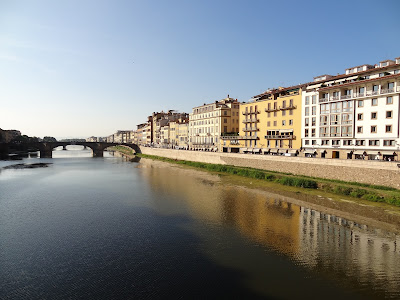 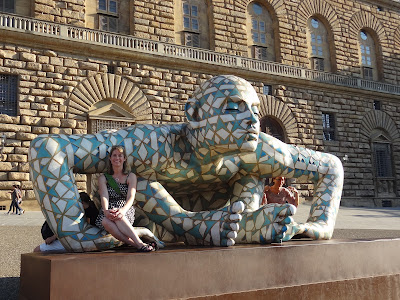 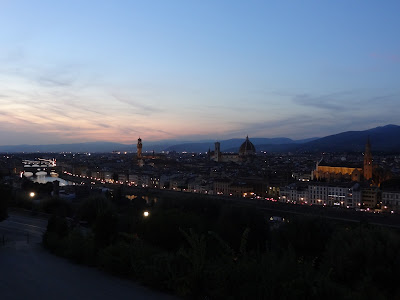 One last thing: I will never travel again without my American Apparel circle scarf. I read about it on Mighty Girl and it was fantastic. It made covering my shoulders in churches a snap and it did all these things while being small enough to fit in my tiny bag.

I want to go back to there.