My room got shocked

Have you heard about this product that eliminates mold, mildew, and odors? It's called Room Shocker or roomSHOCKER, depending on what part of their website you're visiting. Something similar was apparently used in houses that were flooded during Hurricane Katrina to eliminate mold. I read about it some time ago on Apartment Therapy, bought some on Amazon, then forgot about it.


I've been having really bad allergies ever since Greg moved in; I wake up in the morning, start sneezing, keep sneezing, and then sneeze some more. My friend Erin cheerfully informed me recently, "You probably have mold!" Then my parents came to visit and my father, whose super sense of smell I inherited, started sniffing around my basement. Does it always smell like mildew down here? Before Greg moved in, I always left the door to the basement shut. Ever since he moved in we leave it open. I don't know why we do that, but I'm thinking that maybe an allergen from down there is wafting into the rest of the house.

So yeah, I gave Room Shocker a shot. It's pretty easy to use. You open up what looks like a frappucchio container, read the instructions that are by turns breezy, then terrifying. "Room Shocker is all natural and cannot hurt you. Fill the container with warm water to the line indicated on the cup. DO NOT FILL WATER BEYOND THIS LINE. DO NOT TOUCH THE PACKET. LEAVE THE ROOM IMMEDIATELY. There's no need to leave the house, if you don't wish, as Room Shocker is completely harmless!"

I filled my cup, ran out of the basement, then left for work. But first I started second-guessing that I pushed the packet down far enough, so I went back into the basement to find a cup full of noxious yellow liquid that made my eyes burn. Whew, I did it right.

Seven hours later I returned home to find that you could smell the chlorine from outside the house. I can't imagine trying to stay inside the house all day. I decided to open some windows, leave again, and buy a bird feeder. I had a gift card from when I got my backyard habitat certification.


The Backyard Bird Shop is so. much. fun. They're so excited that you're getting your first bird feeder! They're so knowledgeable! My salesperson was A-D-O-R-A-B-L-E. I love that stores like this thrive in Portland. 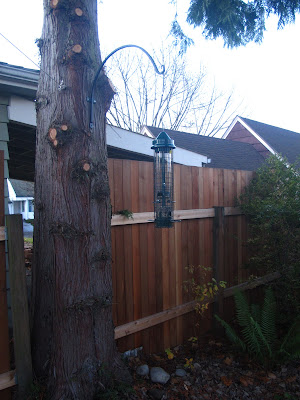 So far my allergies aren't any better which means that it didn't work, or I don't have mold and I'm allergic to something else, or I'm allergic to Greg. So now is the time for all the worriers to come out of the woodwork and warn me that I have black mold and that I'm going to die. Or that chlorine causes cancer and I'm gonna die. Because I don't worry about that stuff enough as it is.