I am super pooped, you guys.

So I dug the hole, I planted the plants. I met a LOT of my neighbors. Working in your front yard is totally different than working in the backyard. I've lived on this street for three years and just now met people who live four doors down for the first time. I talked to people from their cars, on their bikes, as they walked their dogs, on the way to the bus stop . . . Why doesn't that happen when I mow my lawn? 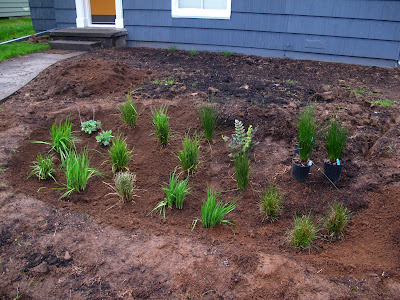 Greg and I went to Home Depot Saturday morning with about half as much caffeine as we needed and bought half the supplies we needed to run the roof water from the gutter to the rain garden. Then we struggled to get the caps off the PVC solvent and got in a fight about where the wrenches went. It's probably better not to go into it. Another trip back to the store and a couple of hours later and I was testing my connections. 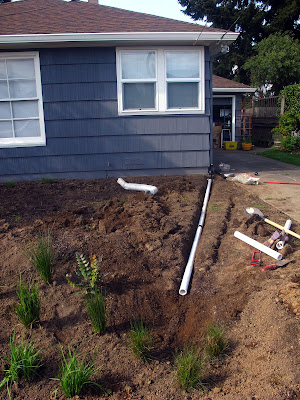 I tested the connections by standing on a ladder, holding a garden hose to the gutter, right next to our power line. Home improvement isn't any fun unless there's the possibility of winning a Darwin award. But at least nothing leaked! 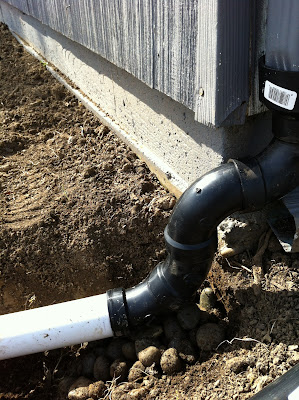 I mulched the mulch, I applied the rocks. We used all the scavenged rocks in the backyard rain garden so I bought river rock from the store and ended up with a bit of a dry river bed. 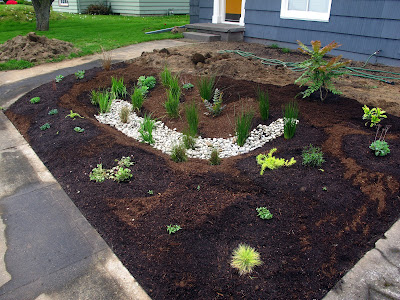 I totally overplanted the rain garden but think of how fun it will be to move all those rocks so I can divide and move grasses! 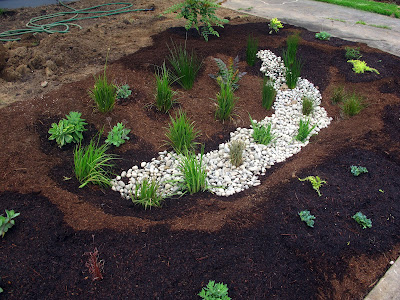 Anyone have tips for making that look more natural and less like the bottom of a fish tank? I know I need some larger rocks, for starters. In the rain garden I've got a mix of slough sedge (Carex obnupta), soft rush (Juncus effusus), dagger rush (Juncus ensifolius), and slender rush (Juncus tenuis). Here's the rest of the breakdown:

I'm going to run a 3' pathway through here and install some more plants on either side. Under the big window I have three New Zealand wind grasses (Stipa arundinacea). 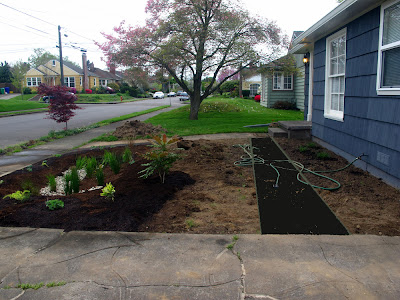 I know I want a black daphne (Daphne houtteana) and possibly a larger grass or three (probably Karl Foerster) for the other side of the mahonia. Other plants on the shortlist include variegated red twig dogwood (Cornus Alba 'Elegantissima'), a Kleim's hardy gardenia (fragrance!), and an alpine mint bush (Prosthanthera cuneata). There's also a plan in the works for adding some agaves and I'd really love to add a dasylirion. Anything awesome I'm missing? I'm leaning toward evergreen, structural plants or things with multi-season interest so the front isn't so barren in winter.

It's supposed to rain all week so we'll see how the rain garden fares. I feel like the whole neighborhood is invested in it now; I don't want to let them down.
Posted by Heather