Greg and I always joke that whenever he goes away on business he comes back to find that I've painted a room. I try and wait until he's gone so he doesn't have to deal with paint fumes. Also, I like to sing while I paint and Eternal Flame is still such a good song you guys, but Greg doesn't need to hear that.

Hang on to your hats, this is dramatic (we're looking at the spot above the door). 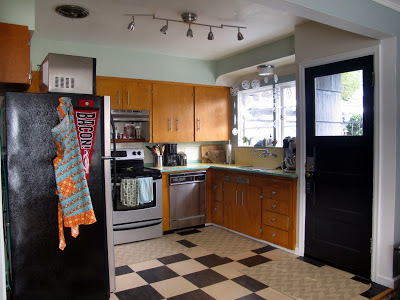 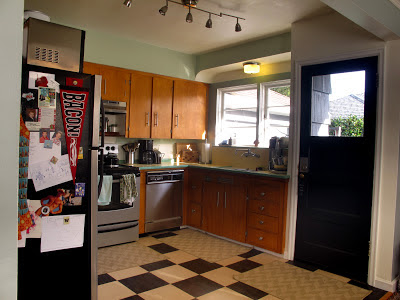 I KNOW. I know! It's crazy. The old color was the off-white from Metro Paint, which smells terrible and is made from recycled paint, so the colors were totally different from batch to batch. The new color is White Chocolate by Benjamin Moore, a color that looks exactly like white chocolate. Why would I bother? For starters, there was a spot over the door where I started to paint three years ago, then realized it needed to be patched, so I painted around it, then spackled it, then never painted. And I guess I got rid of the paint can at some point? So I was never going to find a match for that spot. 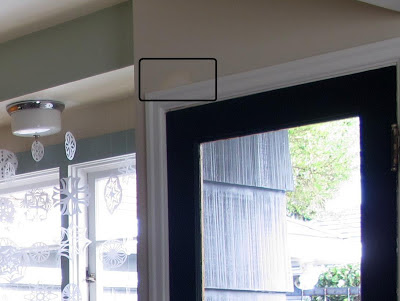 Then we installed baseboard in the kitchen, which I still can't show you pictures of because Tinkernation has neglected to publish my final post. I am contractually obligated to keep it under wraps until they do. But I had to patch the wall, which means the kitchen really needed to be repainted.

I bought a quart of White Chocolate and put up a swatch above the door, since Greg was away for the night. Then I was having so much fun I decided to paint a little further. Then I realized I was just painting the kitchen that night. I almost had enough paint to finish, too. Instead I had to pop over to Benjamin Moore the next day after work and hustle to get it finished before Greg got home.

It didn't work. He walked in and I was behind the stove with a roller and I weakly yelled, "Surprise!" and he was like, "I see the roller and the paint can but everything looks the same," and I had to explain the minute difference between the two colors. 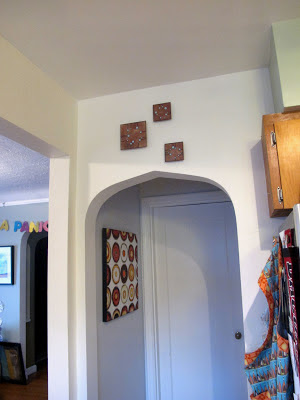 All of the paint fumes with none of the dramatic impact! You're welcome, baby.

The good news is I really love the color and we have no visible patches. And it turns out I still know all the words to Eternal Flame and Walk Like an Egyptian.
Posted by Heather