Toiling in the basement. Again.

Back when we had our earthquake retrofit, they had to cut into the drywall in our basement. That happened almost two years ago and yet I haven't wanted to patch this area because I hate drywall repair. 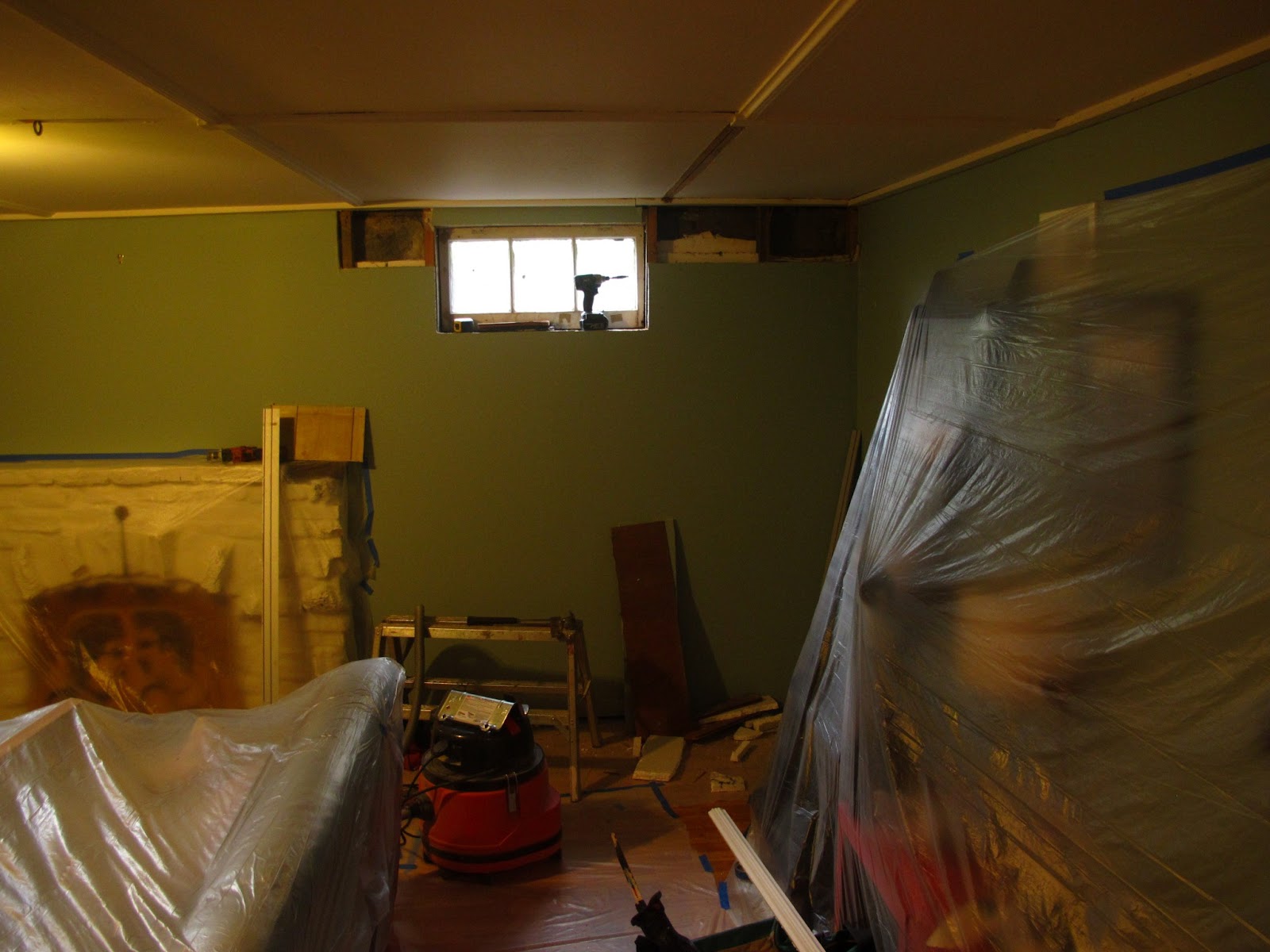 At some point in 2014 Greg screwed the old pieces back into place and I threw one compulsory layer of joint compound on top. It sat like that for a very long time, and every time we watched a movie down there I'd say, "I should really do something about that," and then I would ignore it. Because patching is the pits. 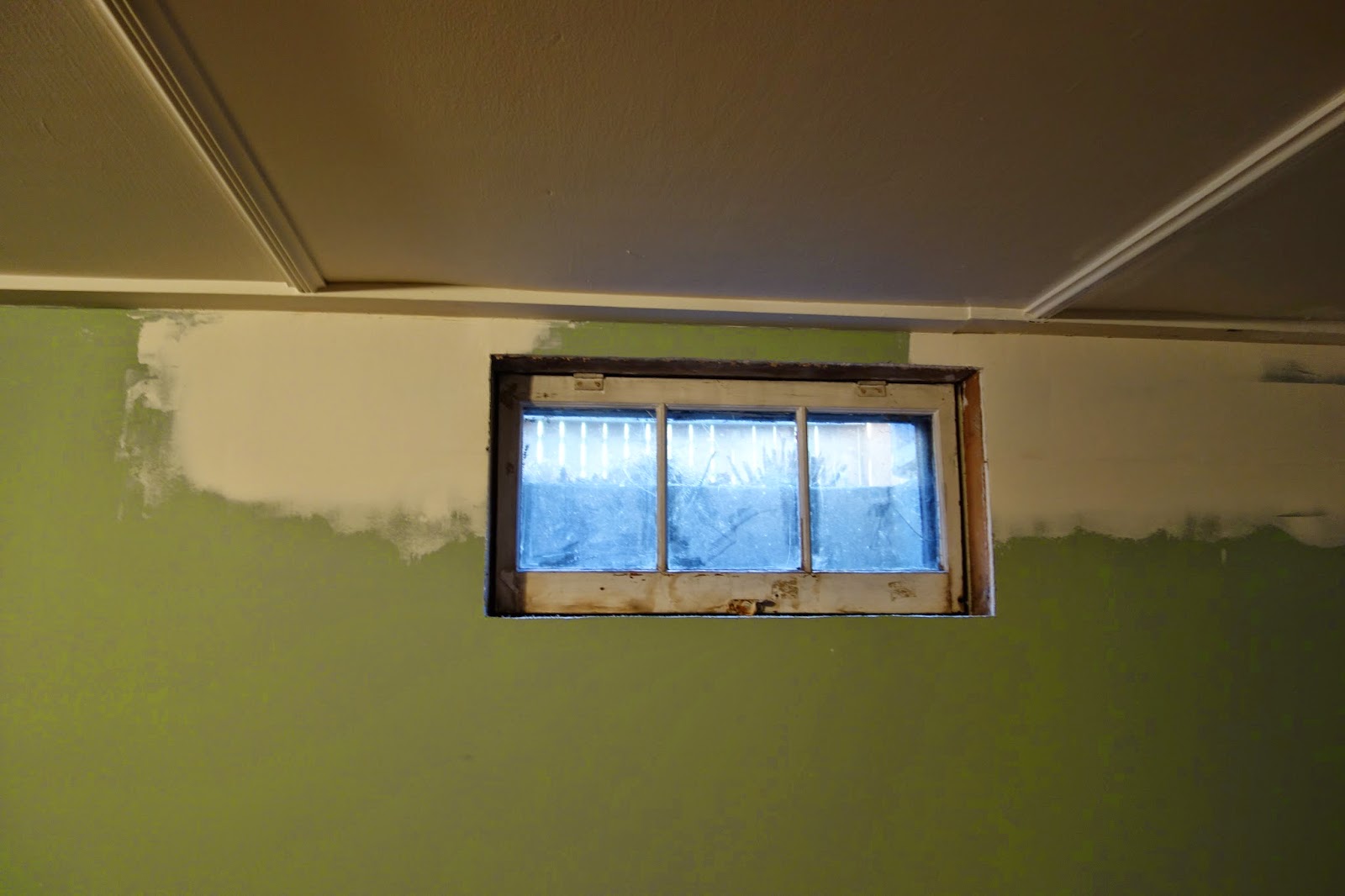 Because we did a shitty job getting the drywall pieces back in place, I had to do one billion layers of joint compound, with all the sanding that comes between coats. Of all the projects in the house, I really wish I had hired the drywall mudding and cornering out. I hate it and I'm not good at it. I've spent months of my life working on the walls in this room and they still look like shit.

Anyway! It became very clear that the entire room was in need of repainting and since I am trying to be a little less of a dictator around the house, I relented to Greg's one constant request: to paint the basement dark.

As I've covered before, Greg hasn't always felt like this was OUR house. I bought it, I picked out all the decor, and I just let him live here. We have this frequent push-pull where he complains, "You never let me choose anything in the house!" and then I run through the house pointing out all the things we've purchased together, and then he says, "I want to paint the basement black," and I screech "NO!" and then he's proven his point. And you know what? He doesn't really want a black basement but we're both stubborn enough to go through with painting it that way, just to spite each other.

If this isn't clear, I'm so excited to marry Greg. I'm crazy about him and I can't wait to be his wife.

When it became clear that the whole basement needed to be repainted, I suggested painting it navy blue. We tried a number of different colors that looked great in other people's rooms but didn't work for us. We finally settled on Blue Note by Benjamin Moore. If I wasn't already marrying Greg I would marry this color. It's so delicious and it's perfect for a room where we watch movies. It's so much darker than I'd ever choose normally, so Greg gets a gold star for this one. 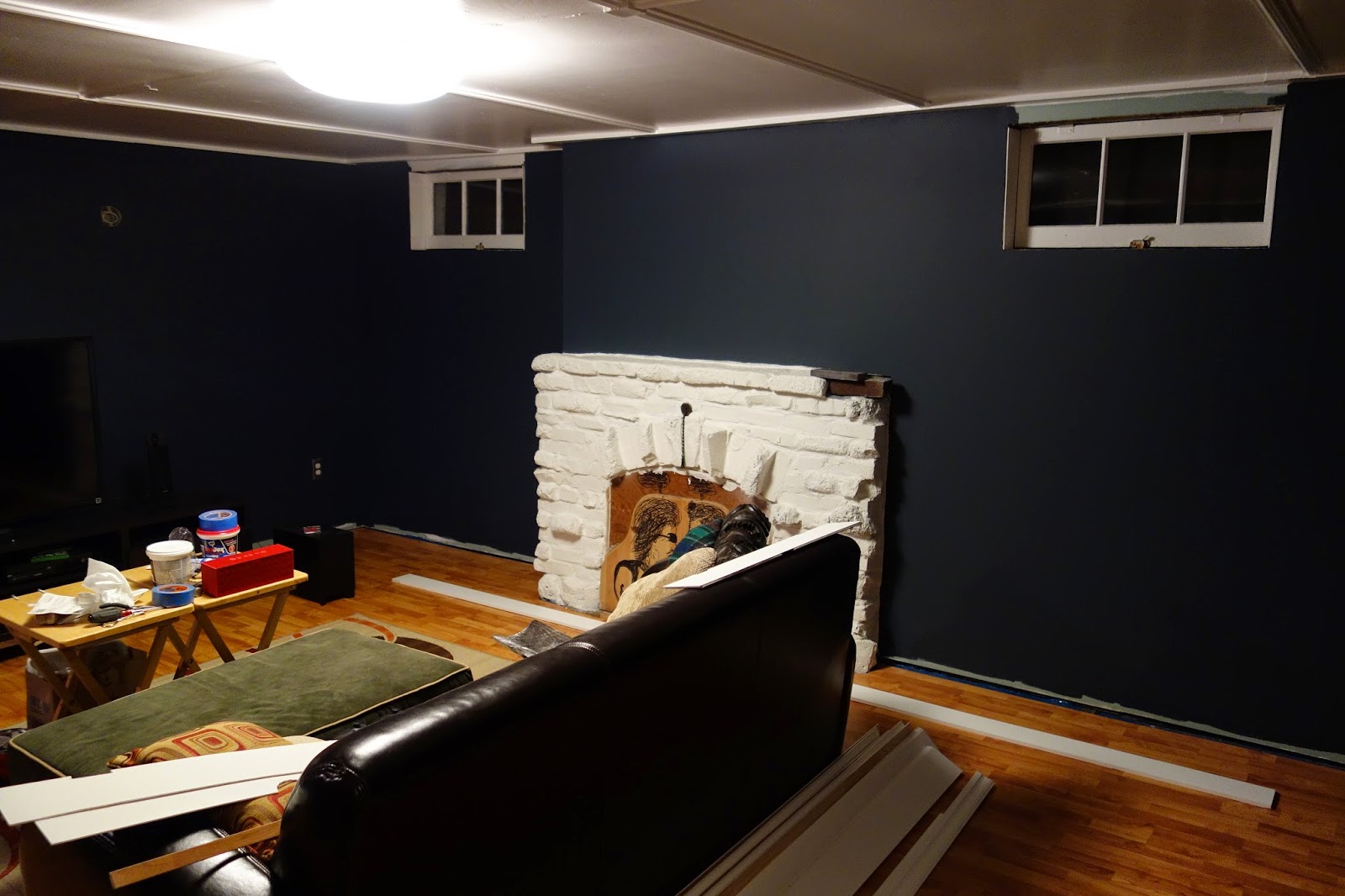 But first I had to deal with the windows, which had never been painted or trimmed out. 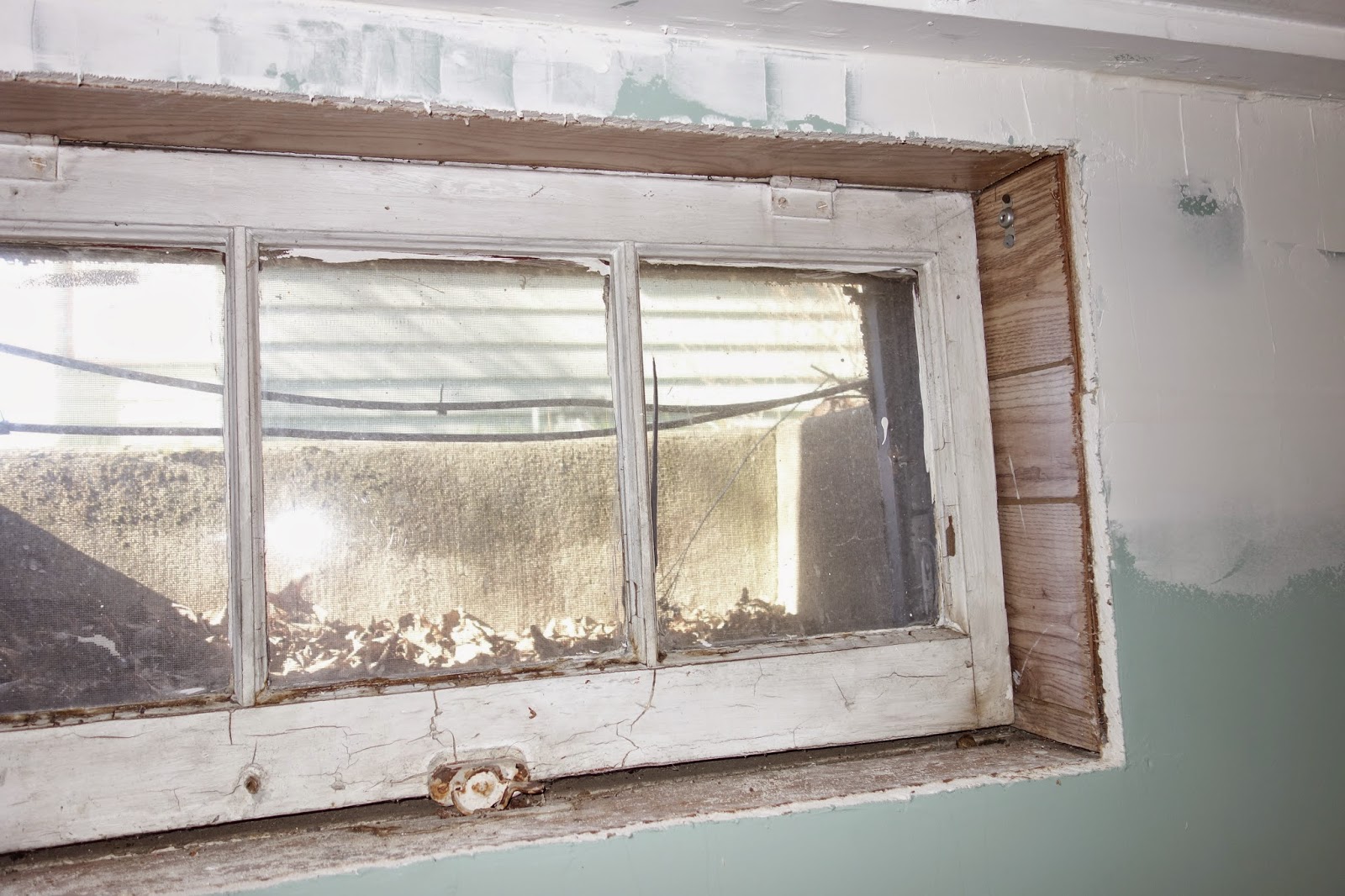 And we needed to deal with Hall and Oates/Beavis and Butthead over the fireplace (free artwork left by the previous owners). 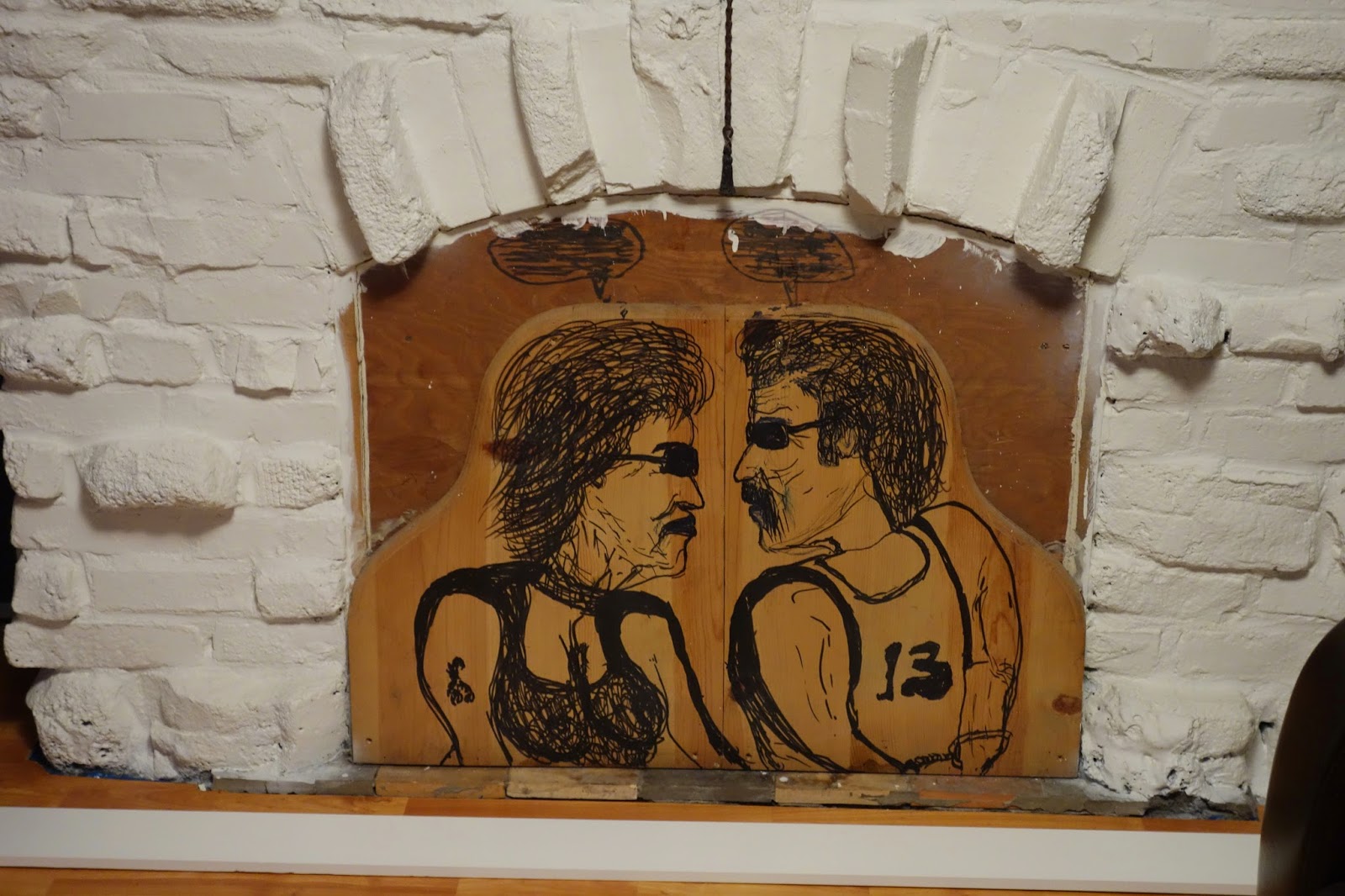 I haven't replaced the window hardware because I'm afraid it will disintegrate into rusty pieces and I'll never find a replacement. 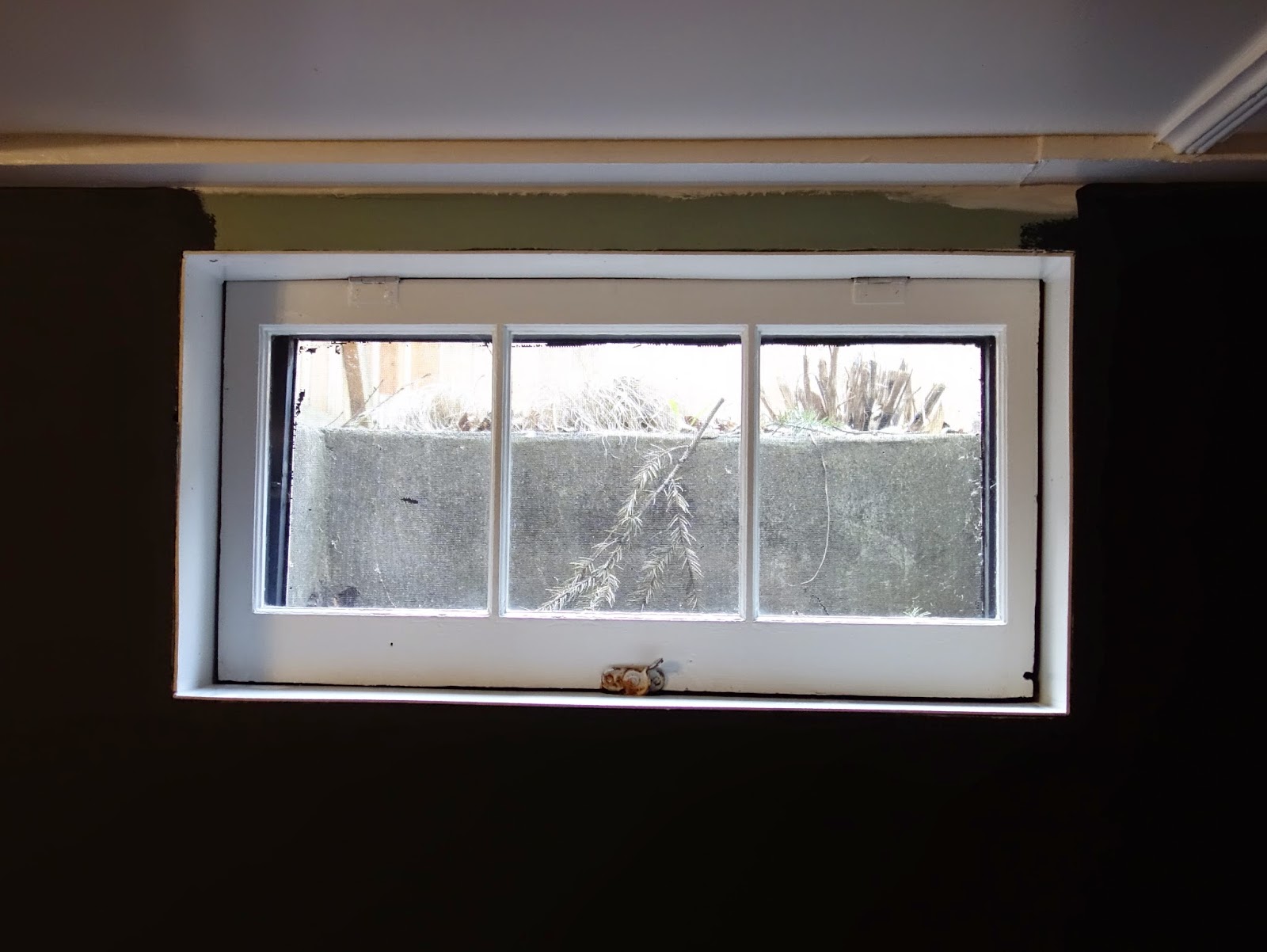 I think, for never having done this before, I did a pretty good job. We then spent a Saturday installing baseboard and window trim. 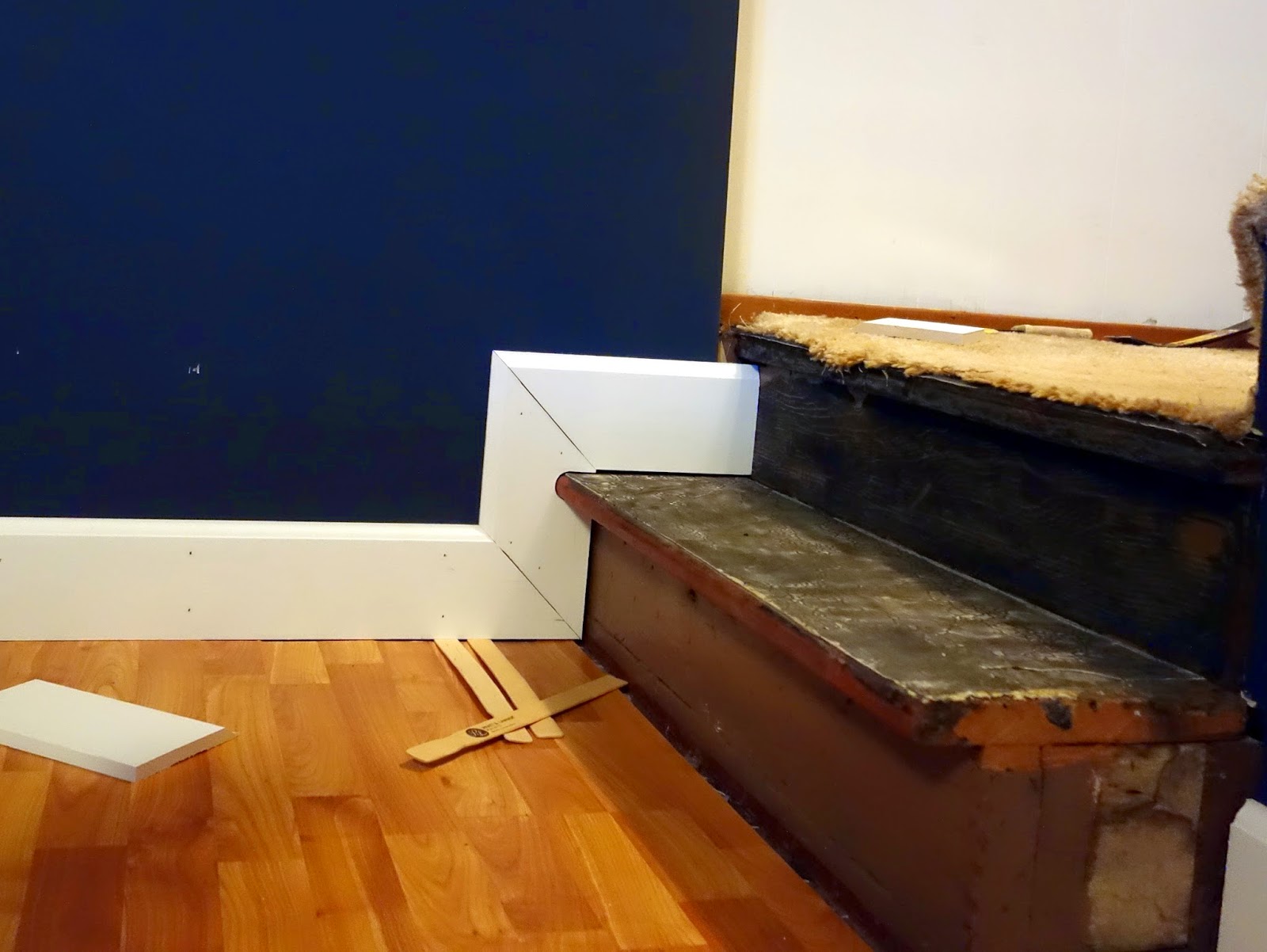 And Hall and Oates got replaced with a new cover. I want to repaint it black because I feel like it needs to be darker. We're toying with the idea of building a teak mantel over the fireplace, which will fix that whole missing brick issue. 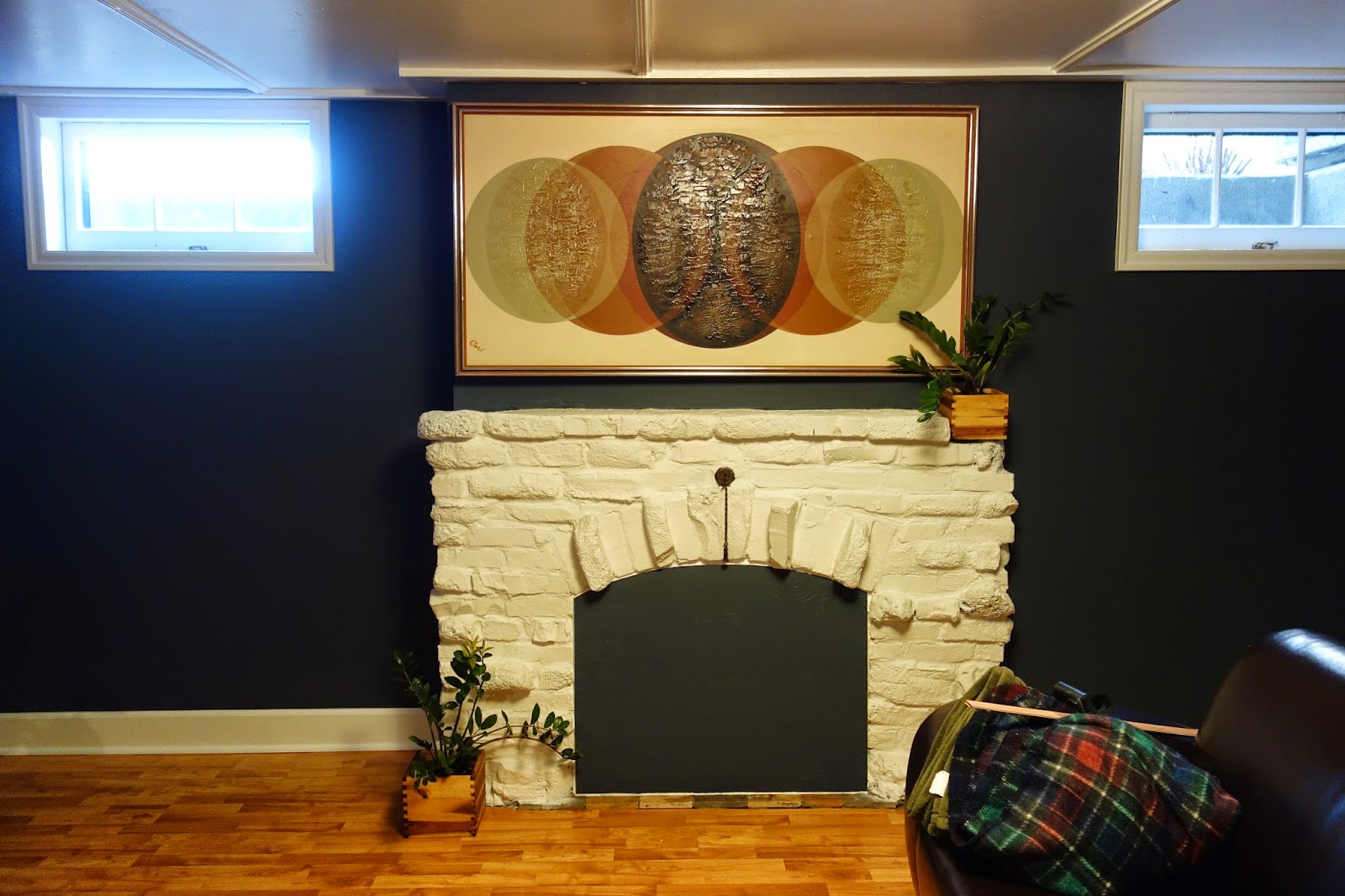 And we hung a sweet bamboo curtain to obscure the storage area and provide some texture. Now we'd like to stash a bar in there. 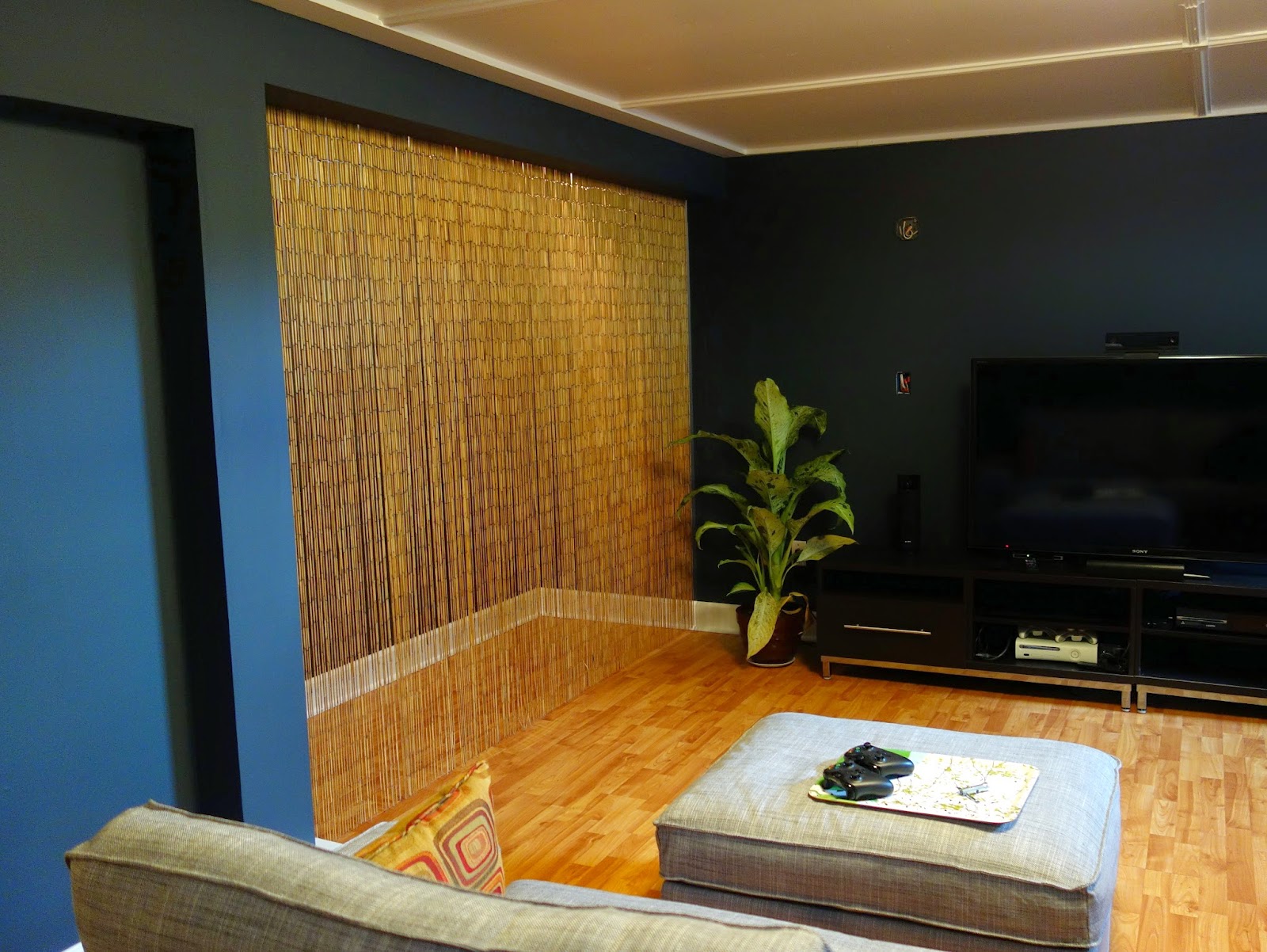 We spent another Saturday hauling the old couch up the stairs, and boy, was that fun! The pleather was peeling and splitting or we would've just kept it down there. Instead we bought the comfiest (though not the most attractive) couch we could find at Ikea: the Kivik. This room is for watching movies, so function trumped form. 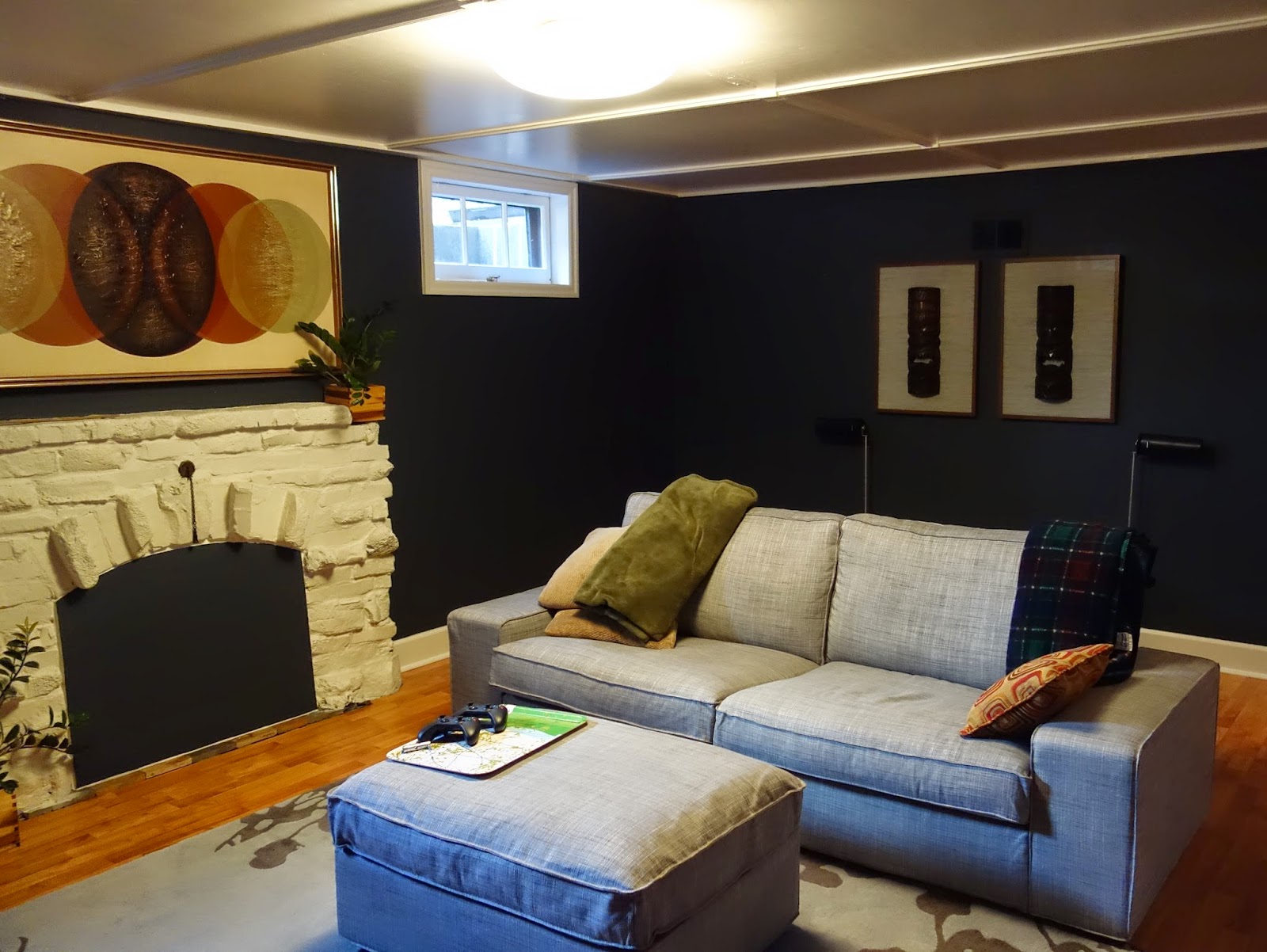 I also mounted and hung the tiki masks we bought in Hawaii. I glued lights inside so their mouths light up. 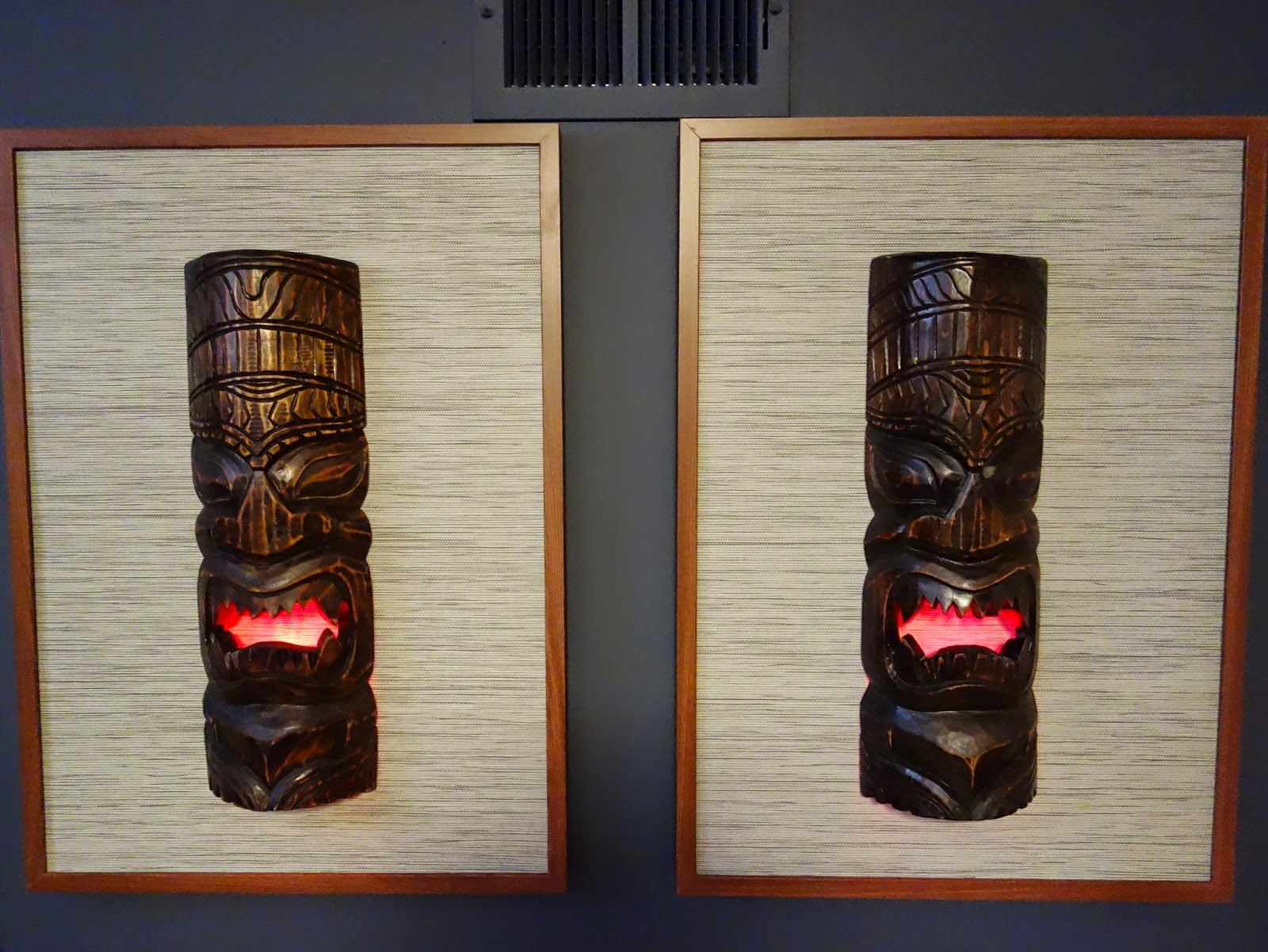 We still need sconces over the TV, a skirt board along the staircase, new stair carpeting, a new area rug, a perfect mid-century modern credenza under the tiki masks, window treatments . . . there's still so much to do. I also kind of want to drywall over the wood paneling in the stairwell even though I really don't want to mud any more drywall seams. And it would be a total bitch to drywall around the stair risers. And yet . . . 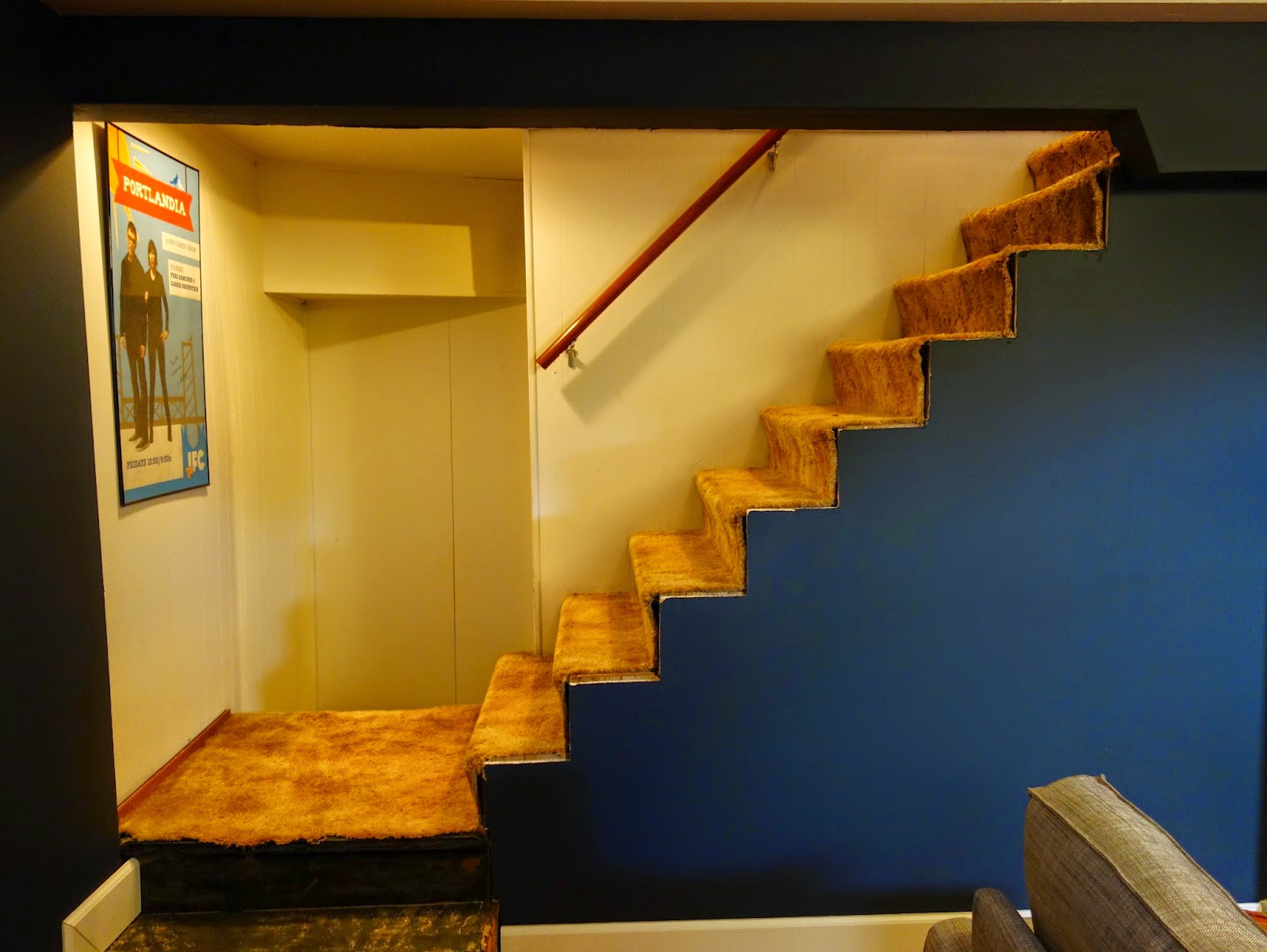 Maybe I'll just wait for a super nice weekend to do that.

To recap, when I moved in: 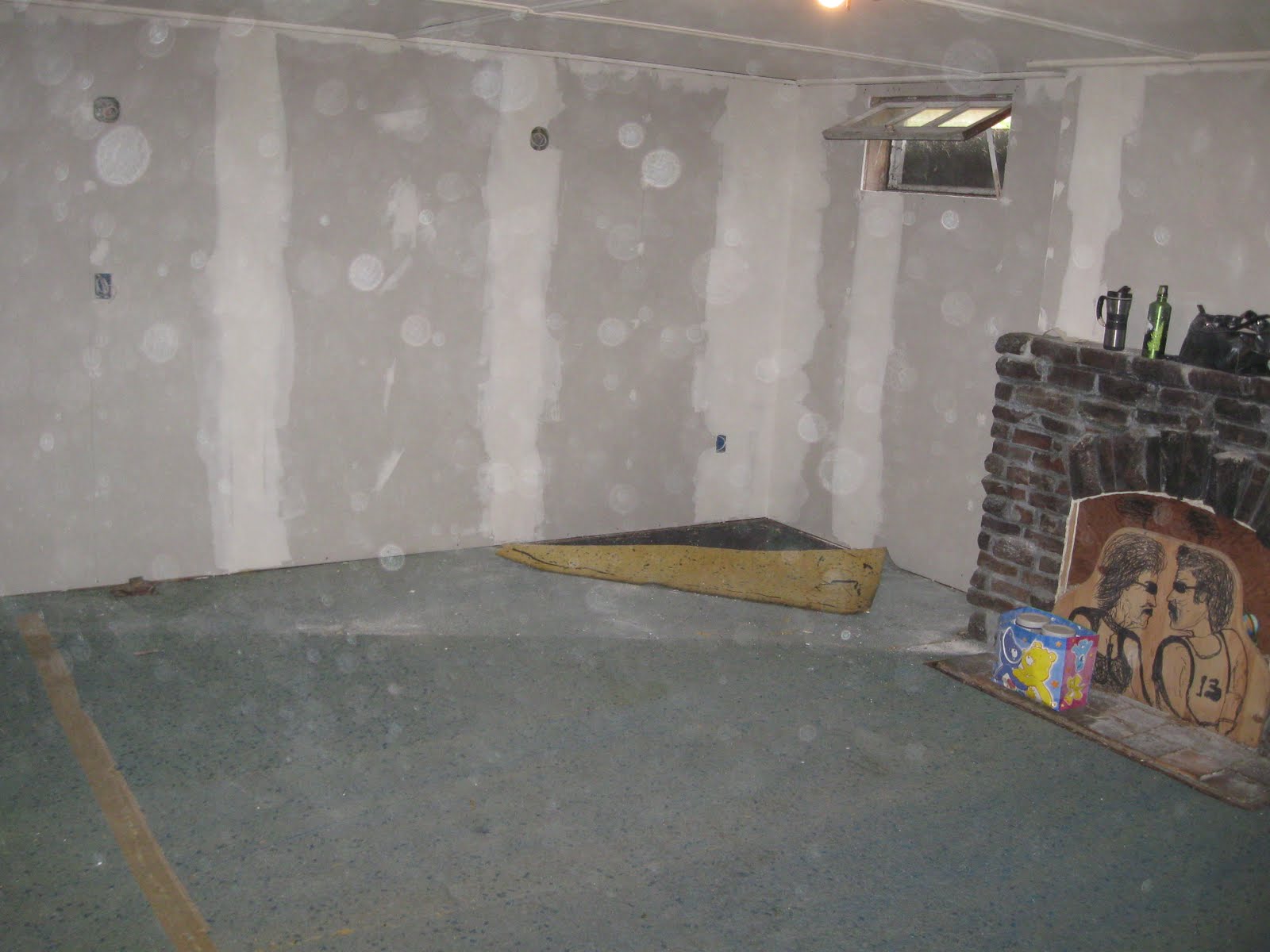 After the first go-around with redoing the room: 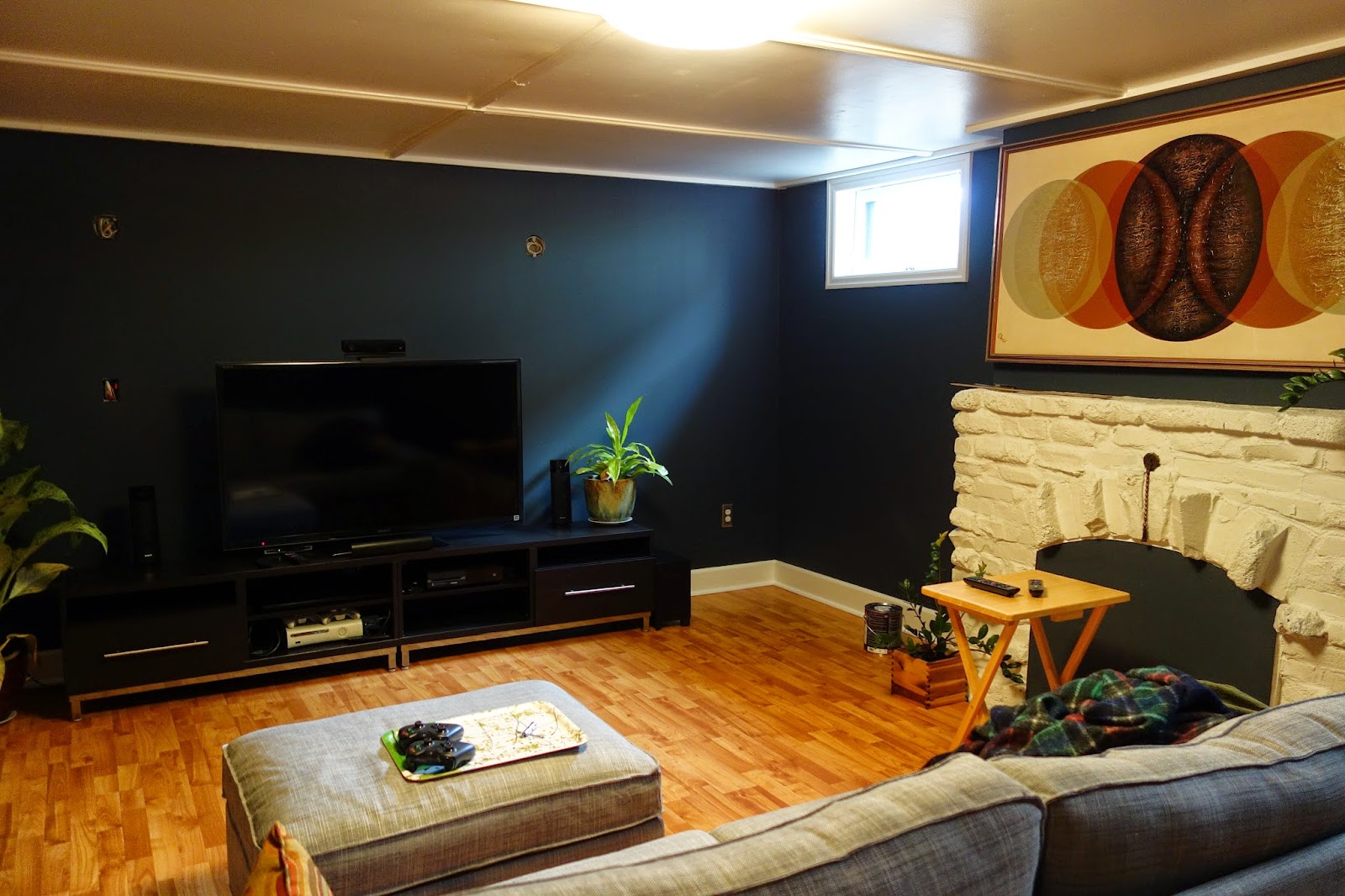 We're getting there.
Posted by Heather