Sometimes I do things that, if a girlfriend was describing them to me, I'd be like, "Girl, what are you thinking? Don't do that," but then I do them anyway.  Hiring my coworker's husband to do some work for me was one of those things.  The bathroom fan has gotten really REALLY noisy lately and I suspected that the duct in the attic had rattled off the motor body of the fan.  I made my boy go up in the attic with me because of the SPIDERS, OH MY GOD SPIDERS. 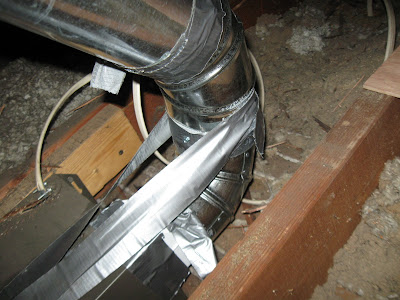 They actually make clamps to hold ducts together and I believe they're quite inexpensive.  But why waste $.60 when you can just duct tape everything together?  When I had the vents put in the roof my coworker's husband, who works as a licensed contractor, set up the duct for the bathroom fan. He apparently decided this was the correct way to do it.
We pulled off the failing duct tape and put new duct tape in the same place. If it's good enough for a licensed contractor, it's good enough for us. What's the worst that could happen?
Posted by Heather