Perhaps I am just defective

Would you like me to write you a check? How about you over there? Or do you prefer Visa?

Someone told me, right after I bought my house, that your house and your car secretly conspire with each other to have problems at the same time. September has been EXPENSIVE. Between refinancing, freaking out about mold, and having the ducts cleaned, my wallet is hurting.

My car got hit by another hit and run last month, while sitting in front of our house. They took off my driver's side mirror, which I later found hiding in the hellstrip. $247 later and I feel like I should never park my car on any public Portland streets, ever. This is after I just got my car repaired from the last hit and run.

I had Garrett out from Mold Testing Services of Oregon to inspect the house for evidence of mold that could be triggering my allergies ($450). I told a friend that I don't know what I fear more: that they'll find a horrible mold infestation or that they'll find nothing and it will turn out that I'm just one of those wheezy asthmatic kids who can't play tetherball because my lungs are stupid.

He spent two hours using a moisture sensor and crawling through the crawlspaces and attic, as well as combing every inch of the basement and the rest of the house (even the closets, ack). He had some suggestions but returned no smoking gun. He ran two air culture tests, and he expects them to come back normal. He said this is a very well built house. I gotta say, this guy was so nice to work with.

He said it seemed like I did a good job installing the laminate flooring in the basement and sees no reason to remove it. GO ME. Score one for doing it yourself.

He recommended tightening the toilet bolts because, despite replacing the wax ring and using a dime to shim the toilet, it's still rocking. I can't believe my dime trick didn't work. He suggested calling a plumber so they could do it right. Score one for calling in a professional. He said to get rid of the carpet on the basement stairs because, no shit Sherlock, it's disgusting. 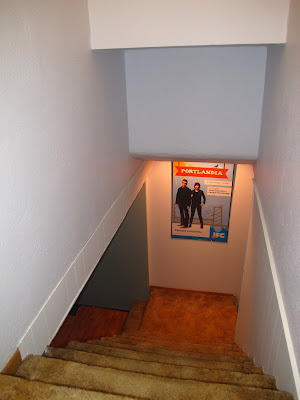 He recommended an air purifier for me, which should help my allergies tremendously. Who wants to bet I should have just done that and called it a day? He also said that the soil grading in our yard was fucked up (the dirt slopes toward the house instead of away from it). Do you want to know where it's fucked up? Right where that guy drove his bobcat through our yard to remove the concrete slab. I'm fairly certain that most of the world's problems can be traced back to that unlicensed jerk riding his Bobcat of Destruction through our yard. Cholera epidemic? That guy. Hurricanes in the south? The weather gods are punishing us for hiring that guy when he probably wasn't bonded.

While we were exploring the basement we noticed that there was water all around the furnace. The condensation pump had misfired, overheated, and melted in places. I initially thought the guy from Power Vac broke it but Jacob's (who installed my furnace) said it was just funny timing.

Ha ha ha ha! Hoo. Ha. ($275) I'm laughing so hard I'm crying now! But I am grateful it didn't start a fire. I'm glad I was in the basement with the mold dude and we were looking at things with a critical eye. This is good.

I also went shopping with Scott this weekend, to Wind Dancer Garden. We had just seen Carolyn Kolb speak on ornamental grasses last Tuesday and she is a wonderful speaker. I cannot recommend making a trip to Salem to see her enough. She and her husband are incredibly sweet, the nursery is gorgeous, and they have all sorts of wonderful grasses and bamboos you can't find anywhere else. 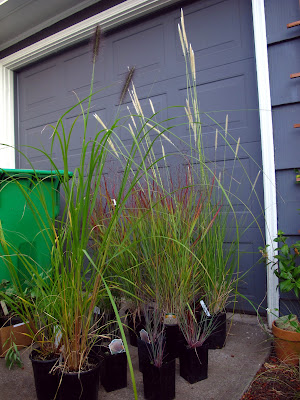 13 big pots of grasses for less than $100. Gardening, I love you more and more every day. We also hit up Dancing Oaks and almost got lost outside of Monmouth, where surely the hill people would have murdered us. So that's a silver lining, too: we didn't get murdered by hill people. Now I just need a little bit of rain to make the ground workable. JUST A LITTLE, OREGON. DON'T START WITH THE FULL-ON RAINY SEASON JUST YET.


But I am alive, mostly healthy, and still a very lucky girl. I'll quit bitching now.
Posted by Heather