This last Saturday was the 313th anniversary of the 1700 Cascadia earthquake. We had a blackout dinner party to commemorate and to encourage our friends to get ready for the next one. (I blatantly stole this theme from EmilyStyle, who hosts an annual party for the anniversary of the 1906 San Francisco earthquake. It's a great theme.) We take dinner parties very seriously 'round here and I think we nailed this one.

The first rule of the night: candlelight only. You almost always lose electricity after a quake so you always want candles on hand. 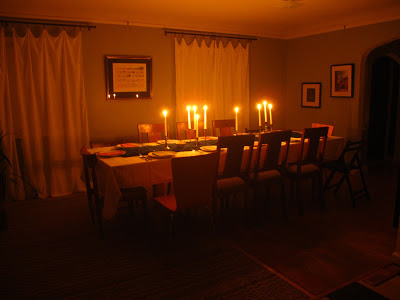 I bought a 12 pack of wide-mouth mason jars and filled them with votives and scattered them around the house. Pro-tip: you need to keep the furnace lower than normal because you have warm bodies AND a bunch of open flames. 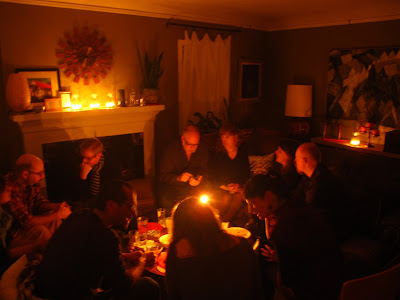 I love my friends because they absolutely commit to themes. We had people group into threes and fours and see what they had between them that would be useful in an emergency. Things like smart phones aren't as great when you have no cell service or electricity to charge them. The team that had a first aid kit, tools, and rope in their car, as well as large amounts of cash took that round.

I'm patting myself on the back because I'm finally figuring out how to make large meals without killing myself. We had brisket, rosemary potatoes, and the best kale salad. The brisket was prepped two days earlier in the crock pot, so I just popped it in the oven an hour before people arrived. Because we were using all candlelight I didn't worry about dusting. Who's going to notice? Appetizers were a cheese plate and frozen goodies from Trader Joe's. I even took a nap the afternoon of the party.

After dinner we played a bastardized version of Family Feud, with questions from the show ("Name an animal you hope never sits on you") as well as questions that we made up, like "Name a thing you should have in your emergency kit," and "Name something you should do immediately following an earthquake."

The winning team was rewarded with hard hats and the losers got Spam. Actually, everyone went home with a can of Spam. If that's not winning, I don't know what is. Then we had gingerbread cake and lemon cream ice cream. It was really fun. 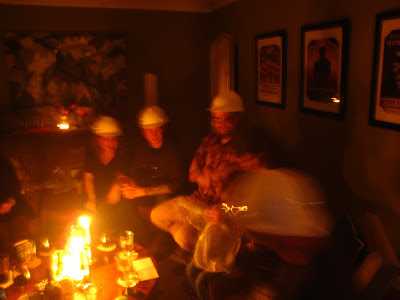 But enough about party details. A lot of people living in the Pacific Northwest don't know that such a massive earthquake is due. The Cascadia subduction zone lies in the Pacific Ocean, where the Juan de Fuca plate is being subducted by the North American plate. This is an area that stretches from Vancouver Island down to Northern California. The two plates are butting up against each other, building up pressure until one plate forces the other beneath it. This is what's known as a megathrust earthquake. The recent devastation in Japan was from a megathrust earthquake. The 2004 Indonesian earthquake was a megathrust. These are massive earthquakes that cause shaking for 4-8 minutes. I was in the '89 Loma Prieta earthquake and it lasted an eternal 10 seconds. I can't imagine what 4-8 minutes of shaking is like.

Experts estimate that the zone triggers every 300-350 years. It has been 313 years, so we're due. There are some really terrifying articles about what to expect when it hits. The majority of our bridges are not expected to be left standing. Emergency crews will be overwhelmed and we'll largely be on our own. Cell reception will be non-existent.

My greatest fear is that the quake will hit while we're at work. Greg will be stranded downtown and I'll be stuck on the east side. It could take him weeks to get back to the east side of the river.

So what can we do? We can make sure that we have emergency supplies in our homes and cars. We can make sure we have a 72 hour supply of water, as well as a water purifier. We may be harvesting rainwater to drink. We can retrofit our houses so they stay on the foundation. Greg and I are getting bids for this now.

Most importantly, we need to know our neighbors. We may end up saving each other when the big one hits. This one is hard; Greg and I are shy and mostly wave at our neighbors.

Ayse at Casa Decrepit has a really great rundown of how they're preparing for a large quake. She mentions that your sewer or water lines may be severed, meaning you won't want to use your toilets. You'll need a shovel and an area in your backyard where you can dig a hole instead. I'd never thought about that.

Right now we're trying to figure out where to keep our emergency supplies. All of our water and camping supplies are in the basement, which is probably the worst place they could be. We may move our water supply to the garage, which would be easier (and less scary) to access, post-quake.

We have Spam, so at least we've got that going for us. Do you have an emergency kit? Are you preparing for the big one? Have I completely bummed you out?
Posted by Heather