I was recently watching Ask This Old House and they did a segment on water heater safety. Because water expands as it heats, your tank is essentially a pressured tank that can explode if there aren't safety measures in place. One of the safety measures on all tanks is the Temperature and Pressure (T&P) valve. If the tank gets above 210 degrees the T&P valve will release steam from the pipe that runs down the side of your water heater to lower the pressure. If you see water around the pipe or witness steam coming from the pipe, it's time to have your T&P valve replaced and your water heater serviced. 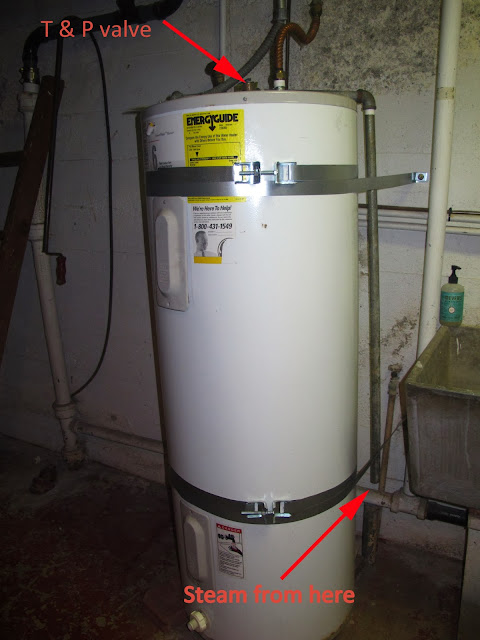 Where it becomes dangerous is when people see that the pipe is leaking and put a cap on it. This turns your water heater into a bomb. In the This Old House segment (skip to the 10:00 mark) they show a house where someone had capped their T&P valve and it blew up, landing three blocks away and demolishing their house. Mythbusters later proved this by capping a water heater T&P valve and letting it overheat:

Last week I noticed water around the water heater and surmised that it came from the T&P valve on my heater. I knew that I could replace the valve myself but I was worried about WHY our water heater was getting so hot, so I called American Plumbing Services. Because I'm about a mile and half from them, he offered to charge me by the quarter hour, instead of their usual base rate of 1 hour. My total cost was $51, which was totally worth it. I had a Thanksgiving dinner to plan! I highly recommend APS, if you're in the Portland area. They were fantastic.

They replaced the valve and said to call them if it starts releasing water again, because that could mean our thermostat is going bad and letting the water get too hot. This is another reason not to crank your water heater beyond 120 degrees.

So go check your water heater, make sure the T&P valve isn't capped, and then maybe flush your water heater of sediment while you're there. It takes about two minutes and you'll extend the life of your appliance.
Posted by Heather