I want an oompa loompa NOW.


I have a number of projects that I want to take care of this summer. A lot of them hinge on other projects, like bumping out the fence on the west side of the house. This area, which I call "the lab," has been taunting me. 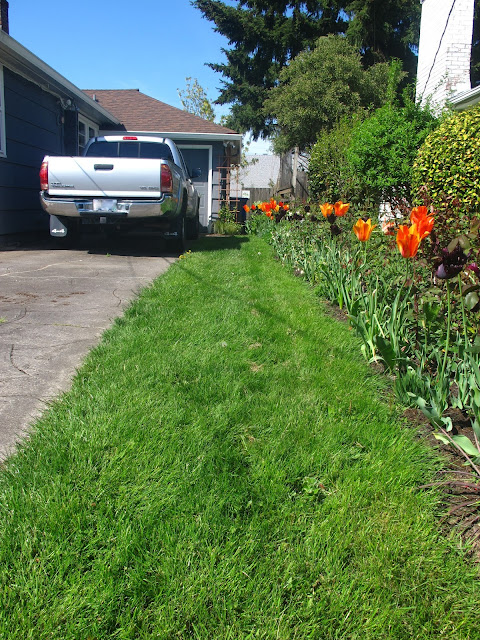 I'm planning on removing the sod here, possibly edging the plants in stone, then replacing the sod with cedar chips. A couple of times I've even signed into YardRents and ordered a sod cutter, only to cancel it five minutes later. I want to remove the sod from the west side of the house (where the expanded fence is going in) and it makes sense to do that at the same time that I remove it here. 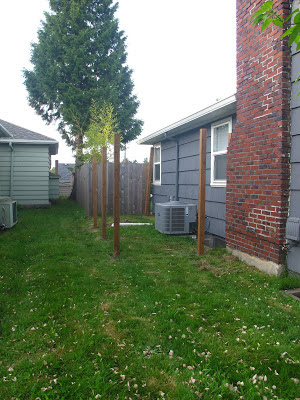 Then I can list the sod on craigslist once and deal with YardRents fees once. That's the smart thing to do but I want to remove it NOW. It's riddled with weeds and it serves no purpose. We don't bag our lawn clippings, so we end up with dead grass scattered all over the driveway and sidewalk, which drives me crazy.

But once we get this removed we'll have almost no lawn in the front yard. Huzzah! I think I'm going to save Greg so much time mowing the lawn that he'll have extra time to rub my back. Back me up on this.

So say we all

Checking in on the front yard

I've been having a hard time with photographing the plants in the lab and the front yard, hence the lack of updates when things are blooming like mad there. My house is south facing (so much light) and I'm a crappy photographer with a point-and-shoot, so my attempts at capturing the prettiness have been lacking. Here was the lab when it was first planted: 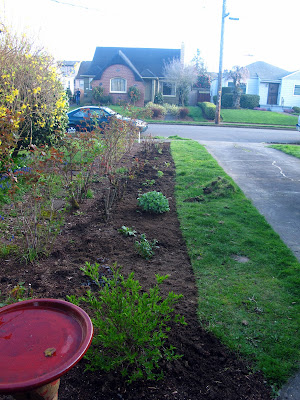 And now with the roses towering over everything. I pruned mine in February, while my neighbor did not. They all got powdery mildew. They all look pretty terrible. 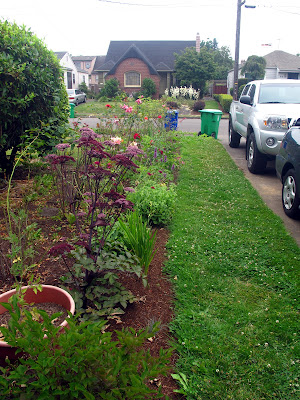 The lab has largely been successful, although the Baptisia I planted never came up (I'm waiting until next year to see if it's dead or just focusing on root formation right now) and my Collinsia fried and died. The color palate in this section is a hot mess but I had decided way back when that I wouldn't care about color combinations. I've got red, yellow, pink, and every color of rose in between.


Clearly the wind is whipping through this section from the north because everything is leaning southward, like Agastache 'Blue blazes.' 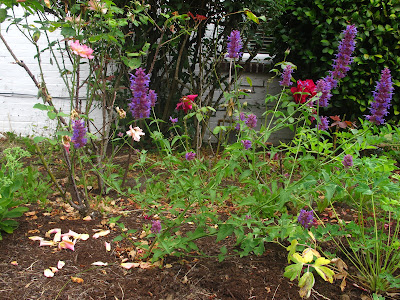 I have to say, I'm not a purple flower kind of girl but I love this plant. The color leans toward the hot side and like it. 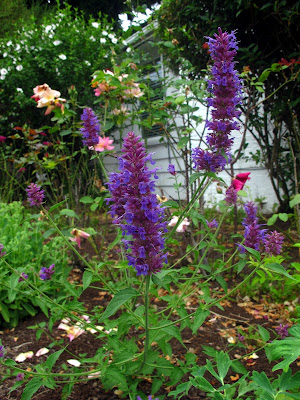 And Penstemon pseudospectabilis 'Coconino County' may have gotten too much water this year because it grew, fell over, and then decided to bloom its heart out. While lying in the dirt. It just looks demoralized.


Yup, my Eryngium tripartitum fell over too. 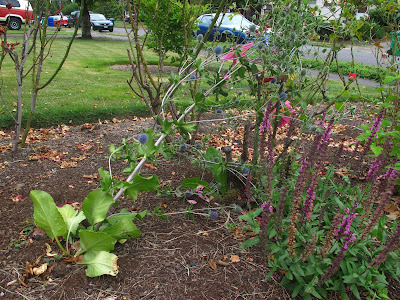 I asked Greg to rig up some sort of support for it while I was visiting my family in California. This was mean because this plant is prickly and constantly covered in bees. He's a good man. 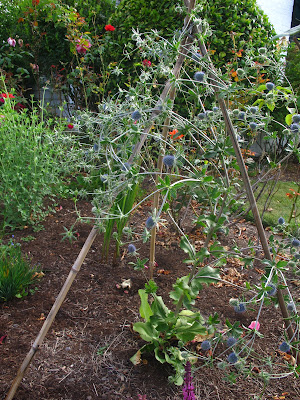 Silene asterias put up four glorious cherry drumsticks and then kind of petered out. I deadheaded it and now I wait to see if it will do anything more. I may just have to wait until its second year for it to put on a show. I even gave it some fish emulsion. This is the first time in my life I've ever gotten my act together enough to fertilize something. 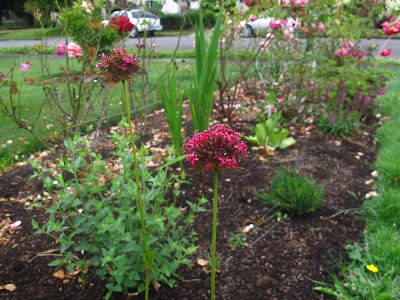 My very favorite plant is Knautia macedonica, which is so freaking hard to photograph without a macro lens. It has very tidy foliage that shoots up long branching stems with flowers that weave and bob through everything. It's awesome and you should look at Scott's photos if you're not familiar with it. 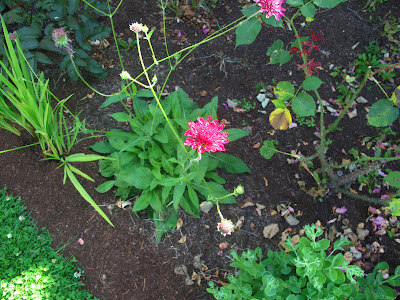 Angelica stricta purpurea is blooming like crazy on lovely purple stems. I love the form, I love how easy this plant is, but that color just sets my teeth on edge. It's too lavender for my tastes. I won't plant this biennial again after it expires next year, even though it's behaved perfectly. It doesn't help that there's a tomato red birdbath and a red blooming Crocosmia 'Lucifer' just to the left. 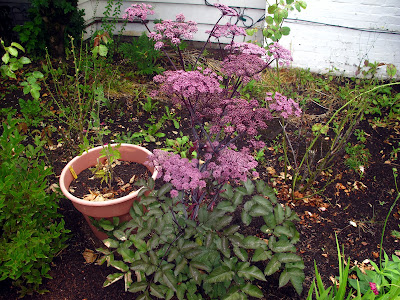 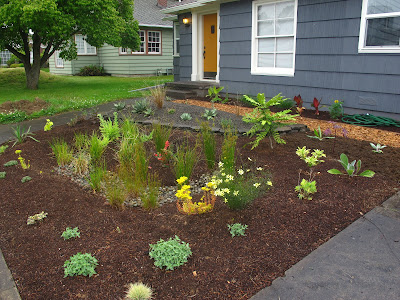 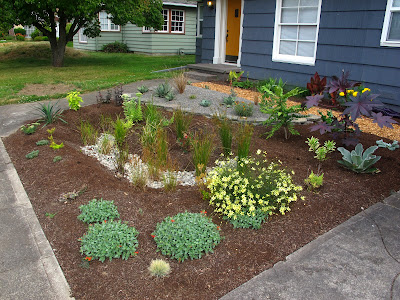 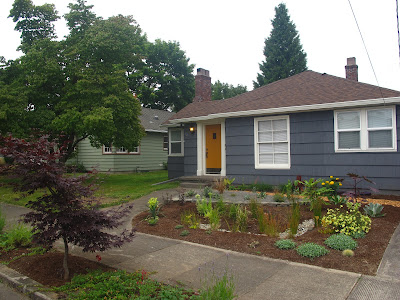 Most notably the Silver Fire Chalice (Zauschneria california 'Wayne's Select') has grown like mad and is starting to bloom. I'm going to have to watch the spread on this guy. 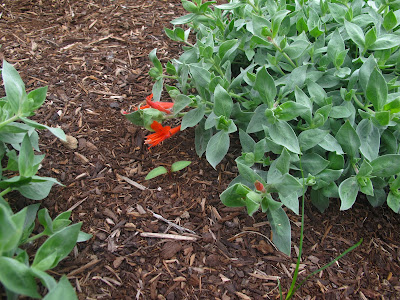 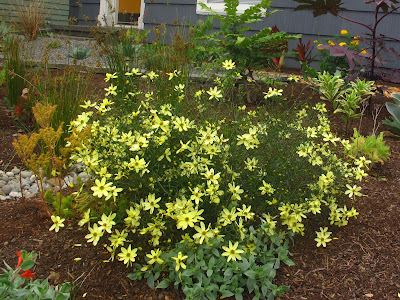 My castor bean plant (Ricinus) has put on a ton of growth and always looks to me like a little man sunning himself. 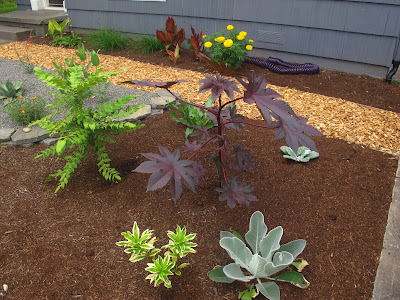 I'm hoping it will set seed (warning: crazy poisonous!) so I can plant some more of this annual next year. I'm enjoying the quick height it can achieve while I wait for my Mahonia to get bigger.

In the berm the Penstemon centranthifolius “Scarlet Bugler” has started blooming. 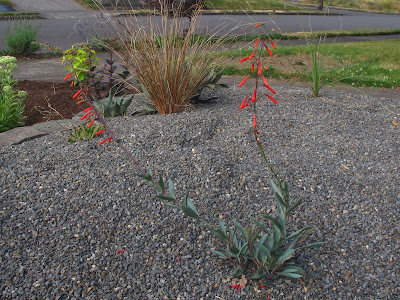 As have the Drosanthemum micans. I'm digging these blooms a lot. 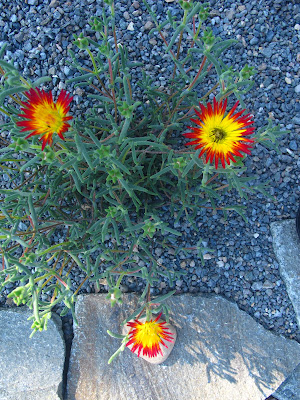 I'm an unapologetic lover of marigolds, especially these huge Day of the Dead marigolds. The cannas are pushing up new foliage but they haven't gained any height yet. I really want height here. 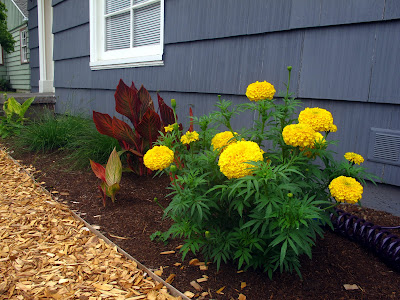 I have three New Zealand wind grasses and I love their form. I've had zero complaints about this grass and I can't wait to see how they look in the fall. 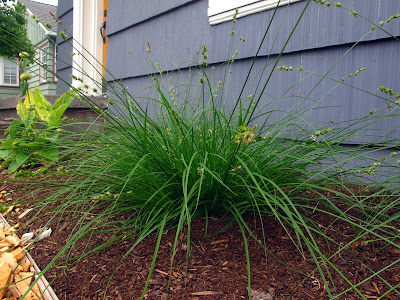 I mistakenly bought one Agastache 'Golden Jubilee' when I wanted a mass of them. I was at Portland Nursery a few weeks later, standing in front of them thinking, "I need to remember to buy two more of these," and . . . I forgot again. I had hoped that they would look great against the dark purple Sedum 'Matrona' right behind, but this hasn't been quite the thrilling combo I'd hoped for. I think they need to be right next to each other for it to work. 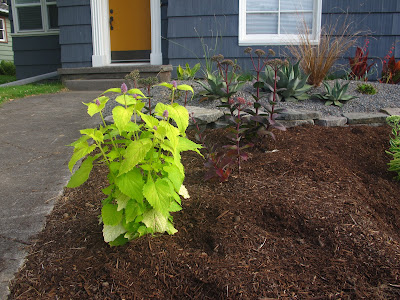 Some of the grasses and sedges are performing like champs. Some of them are destined for the compost bin. Dagger-leaf rush (Juncus ensifolius) has gotten thin and fried looking. It can't handle drying out during the summer so I'm pulling these all out.


Slough sedge, you get to stay!


Now that things are getting bigger and filling in, I need to do some rearranging. I hadn't envisioned a perennial garden out front but that's kind of what I ended up with. I need to work in a few more small evergreen plants so I'm not left with an Oregon Grape and some grasses, surrounded by a wasteland of spent perennials in the winter. I wanted to work in a black daphne (Daphne houtteana) but I think its water needs are going to be higher than everything else out here. Anybody have evergreen, low-water plant ideas?
Posted by Heather 11 comments: 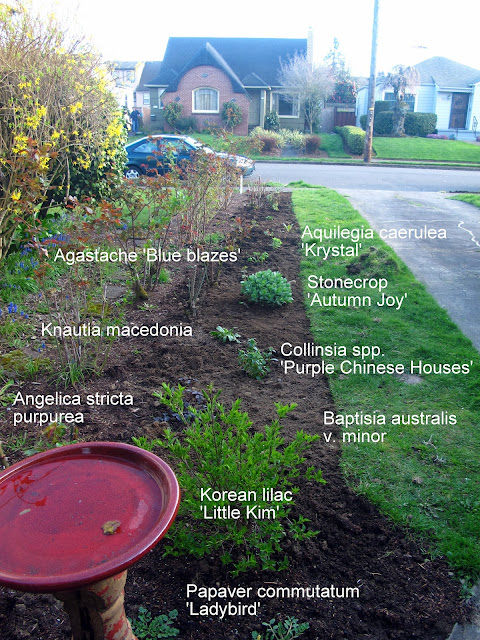 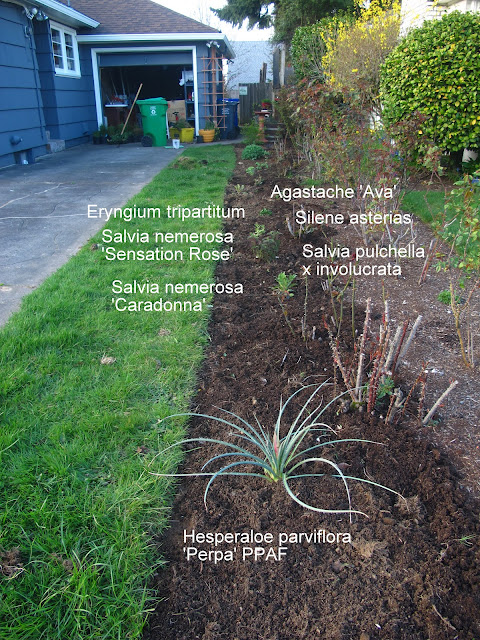 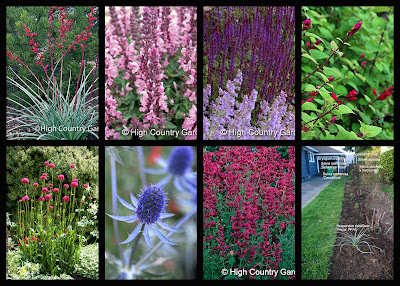