My very tall friend Garbear came over to help me paint.  Painting with tall people is the best. 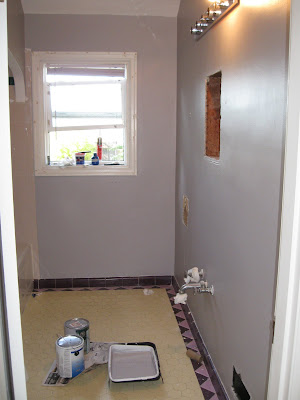 Despite the fact that I bought a sample of this paint color and painted a large swatch, it still ended up different than I wanted. The swatch was gray with a purple undertone; it was perfect. When we actually painted the entire room I got lavender.  It's pretty but it's not exactly what I wanted. 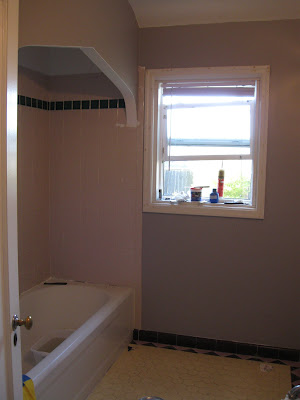 For all my work, it still sort of looks like Easter ralphed in there.  But it's clean and fresh Easter puke.  And man, painting the ceiling is the coolest trick in the world. I will never ever paint a room without painting the ceiling as well (except for the dining room, but I was really tired!).  It makes the room look so clean, so crisp, so brand-spankin' new.

Garbear then painted my bedroom ceiling, the bedroom closet, and the insides of the built-ins.  A funny thing happened, though.  At some point during the day one of us filled his pan with flat paint.  Then at some point I filled it with semi-gloss.  Then who knows what went in there.  It was the exact same color (MetroPaint's Mountain Snow) but in a different sheen  Imagine the tiny bit of shininess you see here: 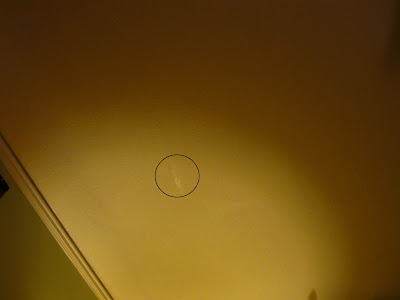 painted in great swaths across your ceiling.  It looked terrible.  Until I figured out the sheen mix-up (and I'm going to blame MetroPaint for mislabeled paint, not the beer we were drinking. BEER DOESN'T MAKE BAD THINGS HAPPEN.) I was thinking that Garbear was a spectacularly untalented painter. I assumed he was pressing harder with the roller or something, which doesn't make any sense.  I wish I could say that this was the last time I made this mistake, but after three months in the house I'm realizing that half the bathroom door is shiny . . . and the closet (which I hit with a second and third layer of what I thought was flat) has some shiny spots where I accidentally touched up with semi-gloss.  AGAIN.

Seriously, keep your semi-gloss and flat paint in different zip codes.  Or maybe ventilate better than I did?  Addled brains do not lend themselves to good decisions.
Posted by Heather