First projects in the house 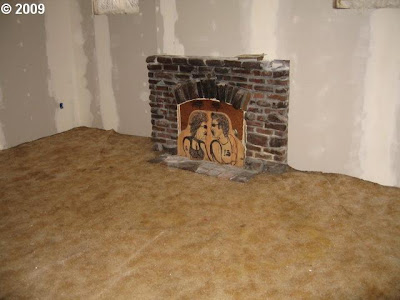 Buying a fixer I sort of bounced all over the place with where I wanted to start. For some reason I felt like I needed to get the basement finished out so I could offer it to potential roommates as a place to be creative, watch TV, or just get away from each other. Nevermind that the sink in the bathroom doesn't work, I have a finished basement! I'm not sure what I was thinking.

As a side note, waiting for my closing date was the most stressful thing I've been through in a while. I couldn't do anything at the house, so instead I stewed and worried. I slept horribly, crunching numbers in my head almost constantly. Could I really afford this place? How long would it take me to get a roommate? One Saturday night I tossed and turned, convinced that no one would ever want to live with me if I didn't have a dining room table and chairs. THE HORROR. But I went out the next day to Rerun on Fremont and got a really cool (if a little dilapidated) Danish dining set for $70.

Anyway, the basement. Scott, Z, and Keith volunteered to help me put in laminate flooring in the basement the following Saturday. Lumber Liquidators had a very good sale going, so I could outfit the whole basement for about $350, which seemed like so much money at the time. So my first project was the pull the mildewing carpet out of the basement. This is the part in the story where people always say, "You wore a mask/ventilator, right?" 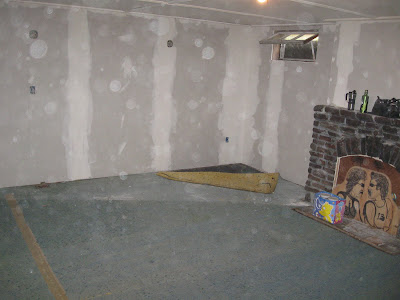 Ummmm . . . . no? It didn't even occur to me at the time. In retrospect? BAD IDEA JEANS, you guys. But I did it and I haven't died yet. The carpet came up really easily, as did the padding underneath. I got it hauled up the stairs and into the garage and it wasn't even 10am yet. I was feeling so good, like I was going to have this whole house finished in the one week I had taken off of work.

I encountered another layer of padding in the basement, the glue-down kind. And I noticed this unfortunate little problem: 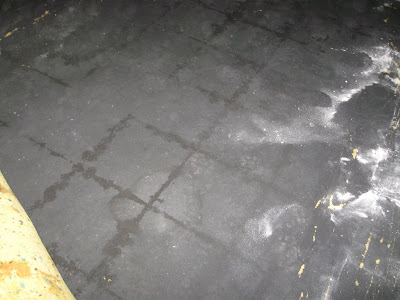 These are water stains from where the water table rose in my basement. Or at least that's what I thought it was. So I emailed Keith and told him what I suspected and waited for a response. In the meantime I had this epiphany: any potential roommate is not going to care about the basement, they are going to care about the kitchen and the bathroom. And furthermore, so would I. So I decided to shelve the flooring project and focus instead on getting the bathroom and kitchen fixed up.

Most days I'm not very smart, but this idea? It was a very good one.
Posted by Heather