Househunting and the reveal 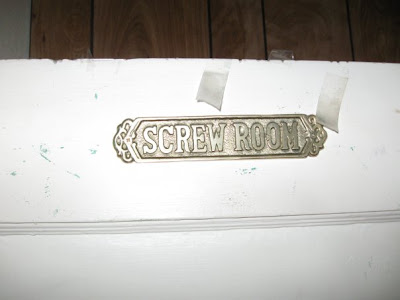 My dad started harassing me last Christmas about trying to buy a house. The market had tanked, there was a tax credit available, and I would likely never be able to afford on my own otherwise. I kept telling him, "I need another year to save money!" and he kept telling me "now is the time."

When I started looking at houses I was a little shocked to see what was in my price range. We looked at houses with non-functioning kitchens and bathrooms. Houses that had been "remuddled" in the 70's and then left to irresponsible renters. Really cool houses (like the one with the "Screw room" placard pictured above, believe it or not) in terrible parts of town. Houses with floors that sloped and buckled. Houses where the walls of the basement were crumbling and bowing in. I always wanted to buy a fixer (much the way people want to buy puppies: with little thought to the actual work involved) but in order to stay in the area I wanted I was going to need to do more fixing than I had anticipated.

The only thing that was keeping me from panicking completely was the $8000 federal first-time home buyer credit. But when you start gutting bathrooms, $8000 doesn't go very far. I didn't even own a couch. How was I going to get a fixer in livable shape AND buy furniture? I started to have that panicky feeling again, so I decided to see if any of the makeover shows on HGTV were filming in Portland. It just so happened that My First Place was casting and their application was blessedly brief.

I should stress that I had no interest in being on TV. I imagine it's like hearing yourself on an answering machine. "Oh god, do I really sound like that?" But add in cameras that make you look heavier than you are and that broadcast your bad hair day to lots of people you don't know. It just doesn't appeal to me. 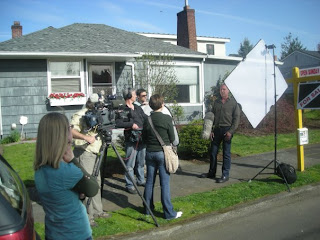 But I did it for the housewarming gift, which in this case was living room furniture. 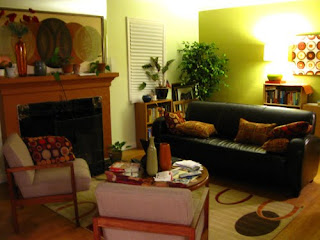 Because I am high-strung and rather Type-A, I wasn't content to let the designer assigned to me do her job. I had ideas and a lot of fears that she would give me something awful. Since I was going through the mortification of being on reality TV for this furniture, I couldn't just sit idly by. Ultimately she allowed me to make a wish list of furniture for the room, but she wouldn't tell me what had been selected. The couch is by Dania and I found it on craigslist. The two side chairs are from the 1950's and they came from Shag on Sandy Blvd. The coffee table is from Vintage Pink on Hawthorne Blvd.

I loved the result and I can't tell you how nice it was to have one room that was fairly finished, particularly during the time when I was brushing my teeth in the kitchen sink because I didn't have one in the bathroom. And the kitchen? It had no proper floor because I'd ripped the tile out one day when water leaked all over it and into the subfloor. And the marmoleum I'd ordered was on backorder with no ETA. And half my life was still in moving boxes in the dining room. Walking through that furnished living room, with its funny TV touches (there's wood piled in the fireplace even though I have yet to get a chimney inspector out to tell me if the thing is safe to use), well, that was like HEAVEN.

I had a small housewarming party the night of the reveal where we ate pizza and drank warm beer (did I mention the house didn't come with appliances?). Then a funny thing happened: everyone felt the need to point out things that needed fixing in the house. I have no idea if this happens to all homeowners, or just people who buy fixers. Or maybe it just happens to women? I already knew I had a lot of work (did I mention part of my backyard fence blew down the day I signed for the house? Oh universe, you SLAY me!) so hearing that my garbage disposal was broken and that my water heater didn't seem to work had me in deep despair by the end of the evening. I went home that night, curled up with my roommate's dog on the hallway floor, and cried my eyes out. What had I done? How on earth was I going to handle the responsibility of this house? I'm in a much better place now but I know that I will probably do this again some time in the future when my sewer line breaks or my basement floods or the rest of my fence falls over.

I took the following week off of work and worked all day, every day, on my house. I'll post some details in a bit from that week.
Posted by Heather