I hit a couple of snags while I was finishing the bathroom, mostly because I’d never done it before.  It wasn’t anything major, but it slowed down my progress.  My bathroom vanity finally arrived one afternoon and I thought (honestly!) that I would just install it after work.  No big whoop.
I got the thing unpacked and staged in the bathroom.  It was pretty.  I somehow came to my senses and realized that I wouldn’t be able to put it together after working ten hours.  I should eat dinner, drink wine, and play with the dog instead.

I should also go back to Home Depot because I hadn’t purchased the correct plumbing materials.  Grrr.

The following Friday I put together the sink, which required installing the faucet and the drain kit.  In retrospect this would have been easier with a second person.  I had the sink cradled in my lap while I blindly tried to wrench things into place, all while keeping handles and spigot pointed in the right direction.  This is harder than it sounds.  It’s not anything that requires a professional but there is a certain finesse to doing it. 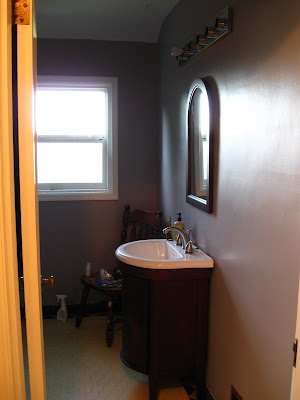 I chose a faucet one step up from the "builder’s special," which is what they charmingly call the cheapest faucet available.  I didn’t want to spend a ton of money (faucets are surprisingly expensive) but I didn’t want to cheap out, then buy another faucet in a year.  I chose brushed nickel, which seems to be really popular right now.  Do you remember how everything in the 80s was brass and how outdated it looks now?  I hope that doesn’t happen with brushed nickel.

It will probably happen with brushed nickel.
Once the faucet was installed I put a thin bead of caulk along the base and set the sink on top of it and then the weirdest thing happened: the sink was no longer flush with the base.  It rocked a little bit.  I shifted the sink around a little, and still it rocked.  I have no idea what changed but I just hoped the caulk would magically fix the problem.  And you know what?  It did.
My major problem with getting the vanity installed was a shelf installed inside.  It was just high enough that it interfered with the P trap of the drain.  I thought, “Well I’ll just remove the shelf!”  Who needs a shelf?  I removed the screws only to find that the shelf was glued in.  Really tightly.  I tried to fudge it and install the plumbing anyway, resulting in a bit of uptilt of the P trap, but this made the drain leak.  Ultimately I borrowed a jigsaw from the North Portland tool library and cut out a little spot for the pipe to hang.  It doesn’t look that great, but nobody should know but me and my roommate, right? 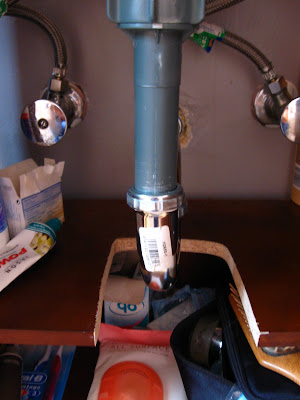 It took me about a week to stop checking the drain to see if it was leaking every time I used the sink.  I still check every once in a while, sure that my work will fail.  My friend Keith came over and taught me how to change out a light fixture and I hung some artwork. 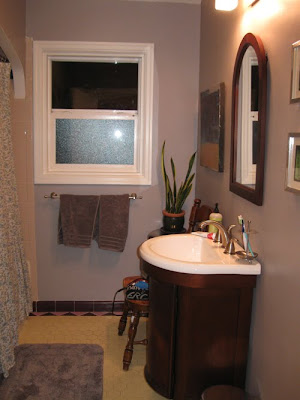 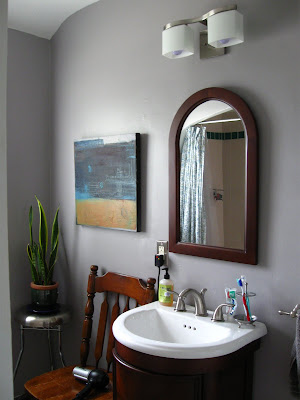 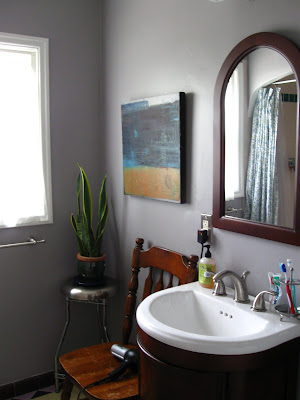 I think I like it even better than the pedestal sink I had planned.
Posted by Heather