My house is such a fame whore.

My friend Krissy has a friend who works on Portlandia, the IFC show that lovably pokes fun of Portland's more ridiculous residents. She sent out an email stating that they needed houses to shoot in. I emailed some photos of our house, not expecting to hear back any time soon.

A very nice guy came out and took some pictures last weekend and then things started to move quickly. On Monday they told us they wanted to shoot on Thursday, would that be cool? I just started a new job and I didn't know if they'd let me have a day off so soon. Luckily, both Greg and I were able to swing it.

The crew showed up at 9am and started gift wrapping our house. They moved everything that could possibly be bumped or knocked over or in any way harmed and moved it to the office. They covered the floors and the furniture and then crammed 40 people inside. Hair, makeup, sound guys, video guys, directors, producers, PAs, people who held fans, the director's girlfriend, baby, and nanny, actors, and people who had unknown tasks. They all looked and dressed like people they make fun of on the show. Lots of skinny jeans and ironic facial hair. They were all so nice. 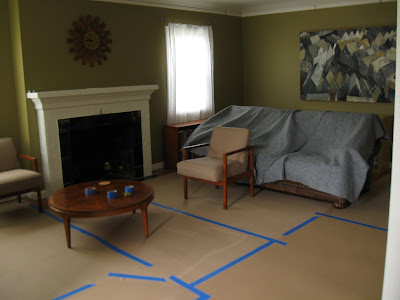 One of the crew members told me she made an offer on my house! She went to an open house and she said it was insanity. Maybe the house got more bids than we suspected? 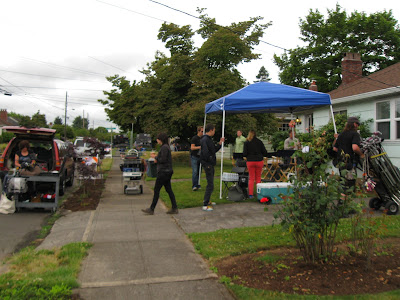 They set up the backyard with monitors and tables and there were cables running everywhere. I am surprised we didn't blow a fuse, they were drawing so much power from everywhere. 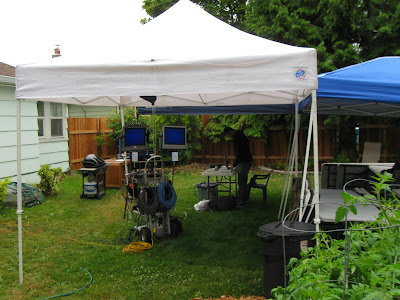 There was nowhere to escape to, as they filmed in our bedroom, kitchen, dining room, hallway, basement, laundry room, and front yard.The wardrobe woman was wearing a ridiculous poncho and had such pretty hair that I felt compelled to make uncharitable remarks about her all day. Stupid pretty girl with perfect skin. 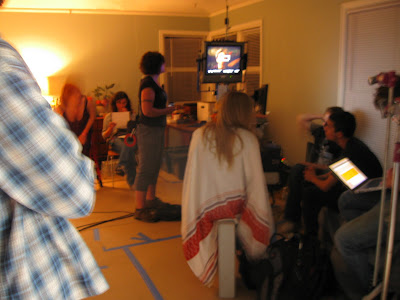 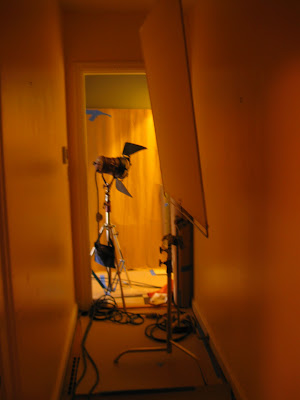 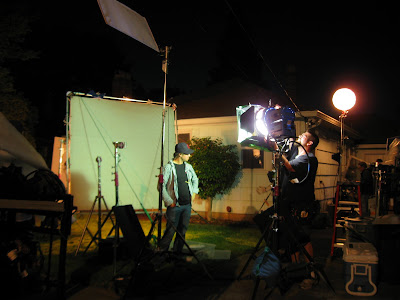 The crew was all very nice. The director was a tremendous douchebag (he's from LA, naturally). Even when they came out to look at the house, as everyone shook our hands and told us their names, he wouldn't look at us.
On the day of shooting, as Fred Armisen came over and thanked us profusely for letting them use our house (which he said so many nice things about) this guy wouldn't even look at us. If he walked into a room where we were, his eyes would glaze over if they passed over us. We did not exist for him.
This got me so bent out of shape that my Type-A-ness reared its head and I got really frustrated about the fact that I had forty strangers in my house, that no one was telling us what the schedule was, and that this filthy hipster of a director was lounging on my bed. He bent over at one point and his blue skinny jeans revealed that the waistband of his stained BVDs had completely ripped. That guy was lounging on my white duvet, stroking his pornstar mustache.. I was beside myself.
This was very obvious to all the crew, which led to a lot of, "This will all be over soon," and "Are you okay? Are you okay? Are you okay?" which made me feel like an asshole. So yeah, note to self: you are too Type-A to have filming done in your house. Crew will step all over your kinnickinnick seedlings and rip your ferns with their gaffing equipment and they won't realize that those are your BABIES and that you too are a baby, who would like them to be done at a reasonable hour so you can get up at 6:30 and be functional at your new job (where you've only been for two weeks).
Aside from the tight nerves (and the fact that they were not filming with Kyle MacLachlan that day [Agent Dale Cooper, MARRY ME]), it was fun to see how a real show is filmed. My brush with reality TV involved two cameras and a crew of 5. This was a different story. It will be worth it to be part of something that Portland has embraced so wholeheartedly. And did I mention how nice Fred Armisen was? He likes my corks! 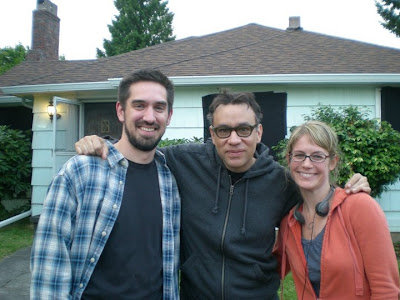 I also love Craft Services. There is an adorable woman who will let you make a sandwich at any time and her school bus is full of candy. 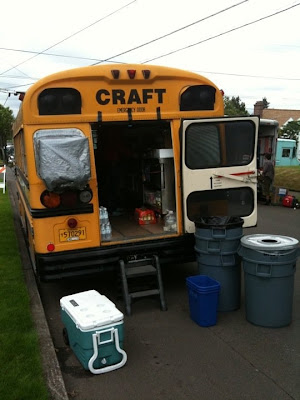 So yeah, I'll unclench soon and enjoy the fact that my house will be Portland famous! Sort of!
Posted by Heather

Labels: filming, portlandia, put a bird on it