Painting! So much painting!

Sometimes I like painting swatches better than I like painting entire rooms or walls. But then sometimes I paint too many swatches in random places and our house starts to look like an outward manifestation of my mind and it. is. not. pretty. So I have to repaint. All of this is to say, I painted the hallway! 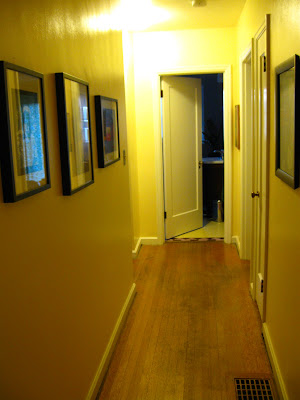 Because I am a terrible girlfriend, I removed the one paint color that Greg really likes in the house: the yellow in the hallway. (I know you're thinking it looks pretty but it was a high-sheen paint that made me feel queasy in artificial light.) When asked why I would want to repaint it, I told him, "It doesn't fit with our color story."

"I don't even know what that means."
"Just trust me."
"I like the yellow."
"I hate it. It's too shiny, too matchy with the bathroom floor."
"How about orange?"
"With a pink, yellow, and purple bathroom adjacent? No way. Any other requests?"
"Black?"
"Go to hell."

See? Terrible girlfriend! Instead I chose the same off-white from the kitchen. It's clean, it's neutral, and we can easily paint over it later when we find a color we both like. It we're being honest, it barely looks different but it makes me happy. It helps that I painted with an eggshell finish. 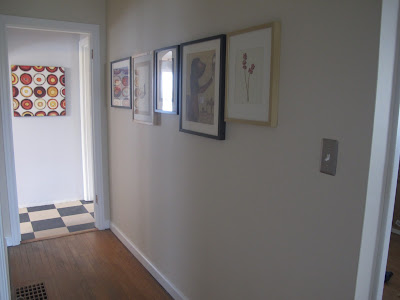 I saw a very pale blue (Benjamin Moore Whirlpool) on Making It Lovely that I wanted to use in the alcove between the kitchen and the hallway. I'm still on the fence about it--I think it makes the floor tiles look yellow. The upshot was that we realized how much more light reflected in this space with a lighter paint on the wall. It could have a little to do with the fact that we finally washed our kitchen windows, but I think the paint is helping. Before it was a french blue color that was actually very pretty.

In certain lights this color reads white but in the bright morning sunlight that streams through the kitchen window it's a very pale blue. I picked it up from Kaleidoscope Paint and I think I paid more for my first car than I did for this paint. It's low VOC but, shitballs, was it ever expensive. I'm not sure it was worth it. The trim paint I used was Benjamin Moore Aura (Snowfall White with a satin finish) and I would sell my first born for this stuff. It's dreamy to paint with. I want to bathe in it (not really. but sorta.). I'll definitely use it again.

And then we're going to put in some baseboard. Really.
Posted by Heather