I think we have a color

House colors: I was leaning toward Peppercorn. Greg was too. 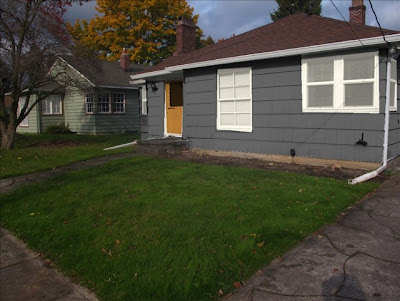 And then he told me that he thought it was too dark but he would go for it if I loved it. I want both of us to love it (and if it looks terrible I need someone to be complicit with me) so I thought about it a while. I mixed some white with the Peppercorn, since he liked the tonality of the color, just not the darkness of it, and put that up on the house. And he liked it! The resulting color actually looks like the picture above.


Of course I didn't measure anything, just glugged some of the Summer White into the Peppercorn and threw it up on the house. I took it into Sherwin Williams and explained what I did. The dude scanned it into his computer and said, "Okay you're all set."

"What do you mean?"
"I scanned it in and we'll give the information to your contractor."
"No, I need you to mix up the paint. The computer is never right."
"Really?"
"Yes. Go mix it."

An hour and half later and 12 iterations and remixes and we had something close enough. I am so glad I am a pain in the ass because that scanned in color wasn't even close to correct. While one of the batches was mixing the two guys at the store started bad mouthing other paint stores and their computers and the fact that they are often too busy/too lazy to have a human look at the colors.

I very tactfully didn't point out that just 45 minutes prior they were going to send me on my way without ever even looking at the computer's color choice. I would like a medal for that.

So the final color choices are Peppercorn-light on the body of the house, Saucy Gold on the door, and Creamy for the trim. Thank you to everyone who chimed in with their opinions--this decision is a huge one and crowd sourcing it made me feel a lot more secure about it.


And soon I'm going to buy all the plants! All of them.
Posted by Heather