There's an old adage that in the first year your plants sleep, the second they creep, and the third year they leap. For some of the plants I first established at the house, this should be their leap year. Our weather has been lovely this week--cold but clear, which means perfect for weeding.

I have never been so happy to weed! It was so nice to be in the yard again, muttering to myself and saying hello to the plants that are starting to poke out of the ground. We have lots of bulbs now starting to show, and the flowering currants and elderberry bushes are budding. 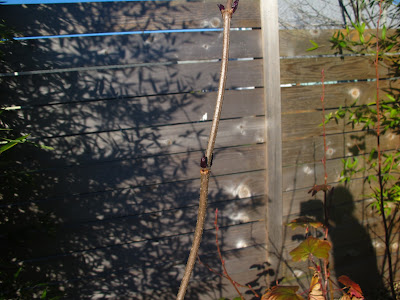 The winter-blooming daphne is *this close* to erupting in blooms and the stonecrop is forming rosettes--hooray! 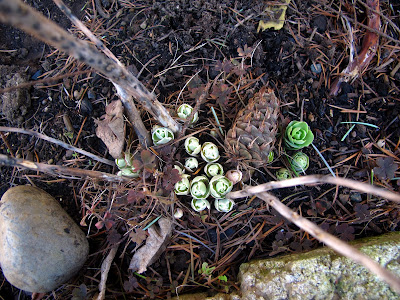 I spent all day removing popweed (Cardamine hirsuta, street name: Jumping Jesus) and Herb Robert (Geranium Robertianum, street name: Stinky Bob). I also put down Sluggo, the only insecticide I'll use. I had a moment of panic where I wondered if I was weeding all the forget-me-not that I sowed last fall. That's the problem with wild flowers--how do you know what's a good seedling and what's an invasive weed?


Remember when my aging next door neighbor thought I wanted her Doug Fir removed? She called a surveyor and had him mark her property lines, so I couldn't "take over her yard" like she claims I'd like to do. I carefully pruned only the roses on my side of the surveyor's white post. After I pruned them hard last year and didn't kill them, I became emboldened and pruned them even harder this time. I might actually remember to fertilize them this year but I'm not holding my breath.

I also did silly things like crumpling leaves that had accumulated under the shrubs by hand. Last fall I put uncomposted leaves on the beds, which is generally not advisable. In the wild, leaf mulch breaks down quickly because animals walk on it. In our urban and suburban yards, it just sits there and attracts slugs. But: if you put out a bird feeder nature does what it would do in the wild. To wit:


So next fall I'm going to put out fresh leaves and a million bird feeders and I will sit back and know that I'm feeding the wildlife AND my plants.My transformation into That Crazy Bird Lady will be complete. I can't wait.

Also, remember my bird bath that I spent $5 on and drove all the way to a trailer park in Cornelius, which took two and a half hours during rush hour, and then I had to patch it with Liquid Nails so it would not leak? It holds water! So my cheap scavenging on craigslist, while dangerous and unattractive, totally works. 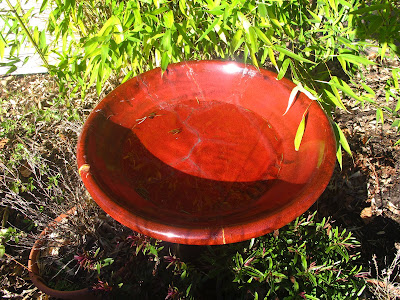