Did you ever have something really hard or bad happen in your life, and maybe you were super worried or stressed about it, but once you had a plan you felt better? You still have to deal with it and go through all the pain or hassle, but having a plan makes you feel like you're being proactive. Plans in the garden make me feel better too. I'm still going to have to deal with plants dying or growing slowly or not growing the way the tag said they would, but I have a plan.

In the northeast corner of the yard, the corner we stare at all through winter while we drink coffee in bed, I finally gave up on the Cryptomeria japonica 'Elegans'. It couldn't stand on its own for whatever reason (I think that corner is just too windy). This corner has been a mishmash of stuff, mostly natives that I got on the cheap because I was so cash poor when I first bought my house. Behind the cryptomeria was an Ocean Spray (Holodiscus discolor) that looked absolutely terrible all the time and it had no winter interest. It was also going to crowd out that tree eventually. Between the weeping blue spruce and the cryptomeria is a huckleberry that is going to take a million years to get up to a good shrubby size. I'm willing to wait on that one because it's evergreen and very pretty. There used to be a native flowering currant in that spot but the pink blooms clashed with everything else so I dug it up and gave it away. While we're on the subject of natives, I planted a nodding onion here on a whim and I will be forever pulling up seedlings as a result. Except the seedlings have to be dug up, they're so stubborn. Worst native ever.

The cryptomeria is going to be replaced by a Korean fir but I've yet to find one with a form I like. I ripped out the Ocean Spray this weekend.

To get some height and winter interest in this area I'm finally getting smart and incorporating tall grasses and fast-growing perennials. Behold, my amazing MS Paint skills! 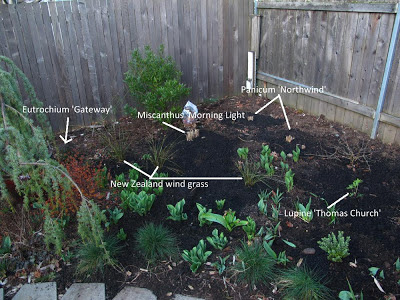 Two Panicum 'Northwind' will lend some height in the back, along with Joe Pye weed. I'm planning to put in some Zauschneria starts to obscure the tulip foliage once they start dying. I'm really excited about the lupine here, Lupinus regalis 'Thomas Church,' which Annie Hayes described in a lecture I attended last spring. Its blooms are two toned purple and yellow and it's fragrant and (supposedly) mildew-free.

Just to the left lies the apple tree stump that I attempted to turn into a birdbath. 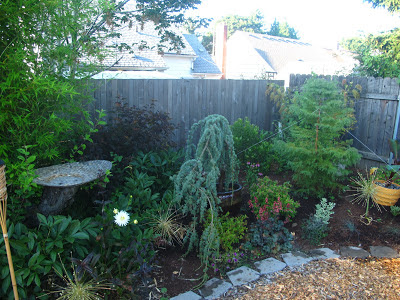 The birdbath couldn't hold water after the second year and the stump keeps suckering along the root line, so I've yanked out all the peonies and penstemon from this area and the stump will be ground out in two weeks. The peonies have been permanently relocated to another area of the yard and soon I'll have a blank slate in front of the bamboo. I don't have a plan for this area yet. 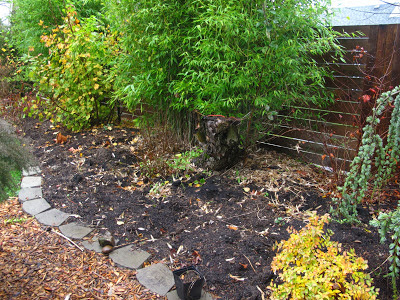 I want to plant a gunnera but I'm worried it will dwarf the ninebark to the right of the bamboo. I'm also worried it won't fit in a yard where there isn't much in the way of tropical plants. I have about 50 square feet of blank slate here. I think I might need another Melianthus major but that's all I've got so far. Anybody have good ideas? Has anyone ever crowd sourced their yard as much as I have? I don't think so.
Posted by Heather