I know it's likely that I've been this enamored of a plant before, but it feels like the first time. I thought I knew love before but I didn't. Because this? This is the most beautiful plant I've ever seen. 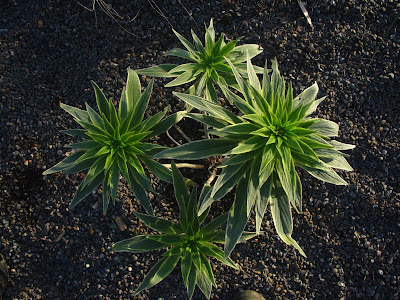 I want to send out Christmas cards with it. I want to call my mother and tell her I've met the one. It's an Echium candicans 'Star of Madeira.' Loree has posted about it a number of times but it wasn't until I saw it in person that I fell in love. I was shopping this weekend, first at Joy Creek, then at Cistus, and I was being really good. I was picking up plants I had planned on and avoiding impulse purchases. But then I saw this and we ran in slow motion toward each other and it leaped into my arms. Or something like that.

I put it in the berm, behind the agaves that are getting so big! 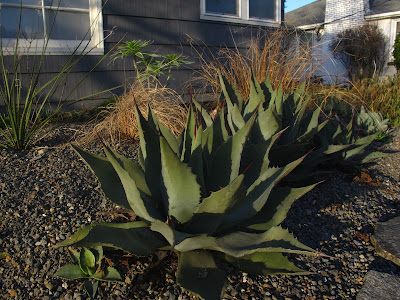 In between the echium and the agaves is a Carex flagellifera 'Toffee Twist' and a dormant (or dead?) ruby crystal grass (Melinis nerviglumis). I think I'd like to put a swath of the Toffee Twist through here. I'm really digging the color combination with it.

In a Bachelor-like twist, I think I've fallen in love with a second plant. I never knew this would be so hard! This was an impulse buy at Joy Creek. 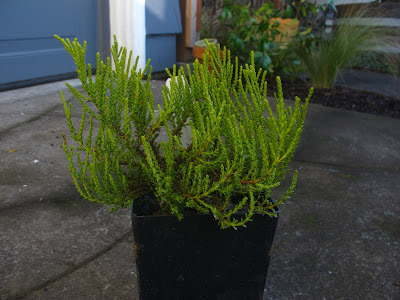 What do you think it is? Greg said it looks like an arbovitae. BITE YOUR TONGUE, GREG. 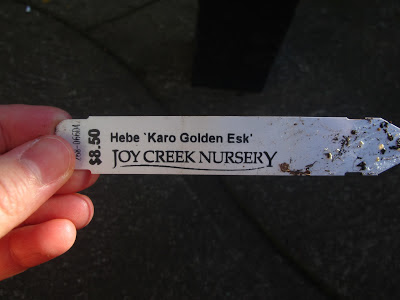 It's a Hebe 'Karo Golden Esk'! Look how adorable it will be.


I love it when I attend a garden lecture and someone mentions hebes because the entire audience moans and groans. In the snowpocalypse of 2008-2009 gardeners lost a lot of New Zealand flax and hebes, both believed to be hardy in the Pacific Northwest. People are bitter now. I've actually heard people shout, "I won't get fooled like that again!"

Luckily that happened before I became a gardener so I can rush headlong into love, like a 24 year old dental assistant who thinks some dude on a reality show is "the one." We've registered at Crate and Barrel and Bed Bath and Beyond and we're gonna be so happy.