The plants now control me and my weekends

It all started so innocently with a plan for a daphne purchase. I'd read on Growing Steady about Sean Hogan's plant talk at the Yard, Garden and Patio show, where he mentioned a daphne that flowers for 12 months.

Oh my god, I could smell daphne all year long! That's my version of the American dream.

So two weekends ago I headed out to Cistus where I picked up the most beautiful plant in the world and two Daphne odora 'Aureomarginata Alba'. The only problem is that the daphne Sean mentioned was Daphne x transatlantica 'Everblooming Alba'. So I called up Cistus last week and asked if they had the everblooming version. They told me they were still quite tiny and not yet out on the tables but they would pull a couple for me to buy. So I headed back to Cistus this weekend and picked them up. While I was there I stumbled on a couple of groups of grasses that weren't yet labeled and didn't have prices on them. I knew they probably weren't for general sale but I grabbed some anyway. When I got to the counter the guy was like, "Yeah, those are for a landscaping job and you can't have them."

They were Chionochloa rubra (New Zealand tussock grass) and Carex dipsacea (Autumn sedge) and I want them so badly it hurts.


I also eyed a chartreuse bear's breeches (Acanthus Mollis 'Hollard's Gold') but decided to wait on buying it. But! I finally had the everblooming daphne in my hot little hands, and you know what? It doesn't smell like daphne. It smells very good but it's closer to honeysuckle. I'm glad I have it and I'm glad I have two standard daphnes to get my fix in the spring.

I'd been planning to put the daphne to the left of the front door, in a planting bed I'd build sometime this spring. When I moved in there was a rhododendron here with a bunch of buried bricks marking a curve around it. 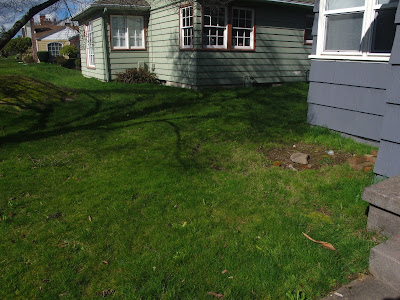 The weather was really nice on Saturday so I thought I'd start clearing the sod and bricks from this area. The soil level was all over the place and graded toward the house, so I had to fix that. 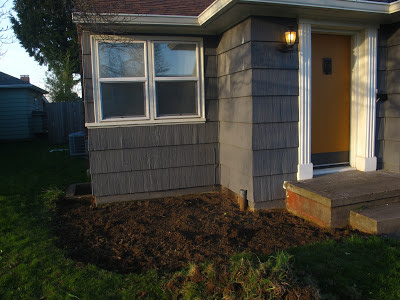 Then on Sunday I headed down to Oregon Decorative Rock and picked up some edging stones like I used in the agave berm and some quarter-ten crushed basalt. I started leveling everything and laying the stones down . . . and then I got tired and hungry and decided to go plant shopping instead.

This is a tricky spot because very close to the house is almost always in the shade and it gets partial coverage from the eaves, so toward the house is drier. As you get to the outside of bed it gets sunnier and wetter, though it's still in shade for the hottest part of the day.

I ran down to Portland Nursery and picked up a Mahonia x media 'Charity' and three Carex dipsacea. Suck it, Cistus. I got my autumn sedges! 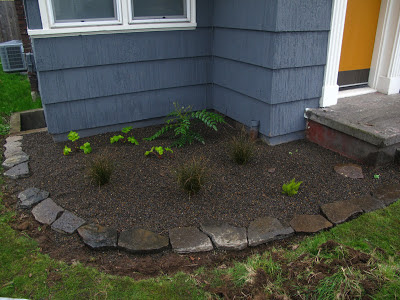 BUT. I had decided that I needed some Acanthus mollis 'Hollard's Gold' here. It tolerates drier conditions than the straight species and it would brighten this dark area up. Portland Nursery didn't have any 'Hollard's Gold' so I went back to Cistus (40 miles round trip). For the third time in two weeks. Global warming? MY FAULT. I'm so sorry.

I planted three because I'm impatient. Anyone who grows Acanthus mollis is tsking right now because they get big and they tend to spread and three is so unnecessary. At some point during the planting of this bed I pulled a muscle in my back, so now I'm miserable and my bed will be buried alive by bear's breeches.

And the daphne? It's so little you can barely see it. The mature size is 5x5 but it may get eaten alive by Acanthus mollis before then. I also tucked in the new hebe I bought at Joy Creek. 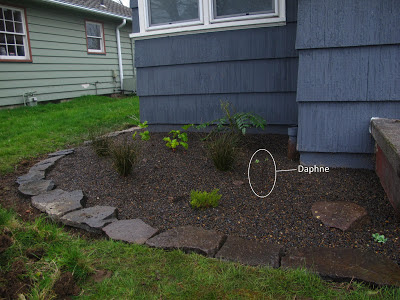 I still need to get more rock and finish the base layer, add a second layer, then top everything off with gravel. I also want to reposition the bear's breeches a bit. I was trying to keep them in the shade band, hence them all being squished together. I've since read in a few places that Hollard's Gold can take quite a bit of sun, so I'm not as worried about them getting scorched now. 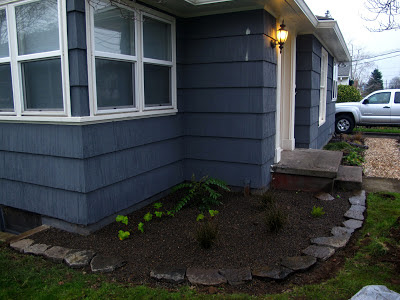 Then I need to remove more sod because the area adjacent to this bed will be the new pathway to the backyard. But first I need to rest up my back a bit (it's getting better!). Send Advil. And go ahead and chastise me for planting so many bear's breeches. I can take it.
Posted by Heather