I'm also ready for my nervous breakdown. I don't know why, but this upgrade-the-electrical-and-insulate-the-house project has broken me. Oh wait, I know why: it's really freaking expensive and disruptive. Again, I would never survive a full-scale remodel.

I'm going to apologize in advance for how whiny I'm being. Break out your tiny violins.

I mentioned a while back that Greg was going to invest in the house and pay for electrical upgrades and insulation, but that changed. Everything is fine with the two of us but it left me scrambling to apply for financing and it annihilated my savings to pay the electrician. As expected, everything took a bit longer than expected, if that makes sense.

The financing took place with Umpqua Bank with a really obnoxious man who kept asking, "No husband? You're doing this by yourself?" Then he slowly explained how a checking account works and what would happen if I "just had to have that diamond ring" and overdrafted my account. I am not making this shit up.

Have I mentioned that I've been having insomnia so I cut alcohol out of my diet? It's like I'm not thinking sometimes. 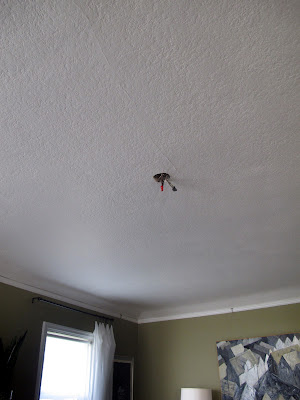 Anyway. Our electrician finished all the work in the attic! Instead of wires hanging out of our living room ceiling we have this super cheap Ikea fixture.


I want something beautiful and dangling in here eventually but I have no money right now. So a cheap Ikea fixture it is! Yay, throwaway culture. The good news is that my electrician redesigned the wiring so things make a modicum of sense. Everything's up to code! If we die in a house fire it probably won't be due to sketchy wiring!

I also had him put in a new receptacle in the hallway so we can better see how badly we need to vacuum. 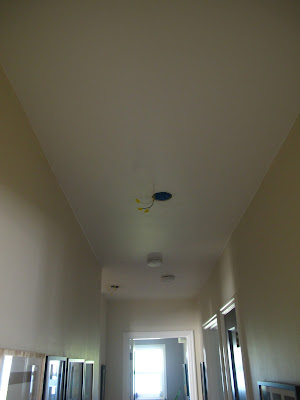 I grabbed these $39 schoolhouse fixtures from Lamps Plus, then went into a shame spiral over how they were made in China and I should have bought real Schoolhouse Electric fixtures and supported a local company.


Then Greg came out and said, "I think the scale is wrong and they're too big for the space," which made me start worrying about that. But you know what? I'd rather they be too big than too small. And everyone is going to be distracted by the fact that we need to vacuum so badly in here, and then they'll be noticing that our rug is the wrong length for the hallway. So it doesn't matter.

If you need me I'll be here, waiting for my waaahmbulance and reminding myself that things could be worse. I'm not destitute, nor do I live in a country where I could be punished for being a woman and driving a car. I can put up with stupid loan officers. Also: my mother sent me this:


She's the best.
Posted by Heather