Home Depot does me a solid.


Remember when I listened to the Internet and poured very hot water down my bathroom sink and cracked it? I called two sink refinishers in town and asked about repairing the crack and refinishing the sink. They both told me that the cracking would only continue to get worse and that repairing it "wasn't worth it."

I visited Home Depot yesterday to ask for their help in locating a replacement sink. I bought the sink as a combination; it included the vanity, the sink, and the mirror. A very nice guy called and found out that it's a Home Depot brand, which means they manufacture it. And my only option is to buy the whole kit again. The kit is $399.00.

I emailed Frank Black, the CEO of Home Depot (contact info here), and Craig Menear, their VP of Merchandising and told them how frustrated I was that I can't purchase a replacement sink. I asked for help in locating a sink, since they manufacture it and all. I got a phone call within five minutes from Greg Stanford who told me they were shipping me a new combination.

I'm still shocked that they can't hunt down a sink for me, as I don't need a new vanity or mirror, but I'm very happy with the customer service. I have always gone to Home Depot over Lowe's (which is closer to my house) because their customer service is better and their return policy is fantastic. I think their associates are totally hit-or-miss. I've had some amazing bend-over-backwards help in the lighting and electrical departments . . . and then there was Gary in equipment who suggested I use a pressure-washer on my kitchen floor. To remove thinset. And then he was a dick about it.

Man, I am still mad at Gary.

But I love you again, Home Depot. Thanks for doing me a solid, even though I'm not excited about putting together another sink.
Posted by Heather 4 comments:

When my parents came to visit they generously asked about a housewarming gift, and was there anything (aside from many, many fattening and delicious restaurant meals) that they could get me?  I responded, "Oh, gosh, I don't know, you don't need to get me anything . . . A GARBAGE DISPOSAL, ohpleasebuymeanewgarbagedisposal."  I'm subtle. 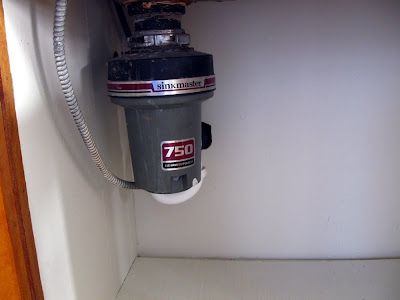 My old garbage disposal had some bolts and metal parts rattling around in it when I moved in.  I fished those metal parts out, but I suspect they were pieces that actually helped the disposal work.  The disposal could sort of grind up things, as long as they were soft, like tomatoes.  Anything more solid than that (apple peels, potato, lettuce) would just sort of bounce around in there until I fished it out with a spoon.  My roommate had more faith in it and would put all manner of things down it, which I would later have to fish out.

My parents and I trekked to The Home Depot and looked at disposals.  They have a helpful little box with buttons that let you hear how loud the disposal is supposedly going to be.  They have a button for the super expensive disposal (Insinkerator) which sounds like your mother, humming as she rocks you to sleep.  The next step down (still an Insinkerator) sounds marginally louder, more like someone clearing their throat.  The third button is for the Badger brand.  It sounds like a motorcycle which is being destroyed by a snarling bear with a chainsaw.

"You're not getting a Badger," Dad decreed.

They bought me an Insinkerator and even offered to pay to have it installed but I'M AN IDIOT, so I said I'd install it myself [meaning: I'd call Bill and make him flounder through it with me].  How hard could it be? 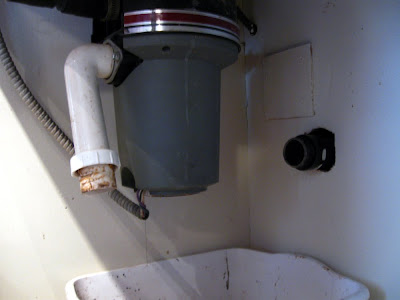 You just remove the pipes and cut the electricity to the old disposal. 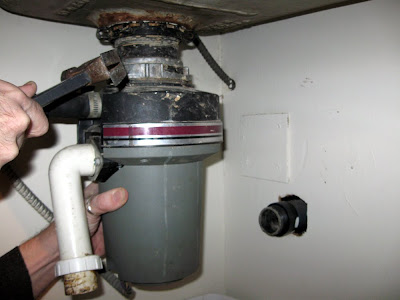 You twist the unit off of the flange and disconnect the electrical wires. 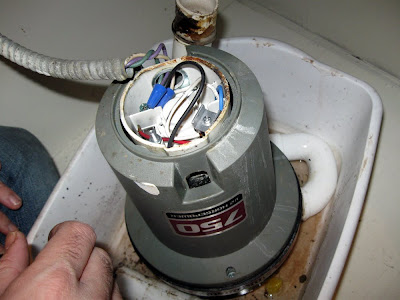 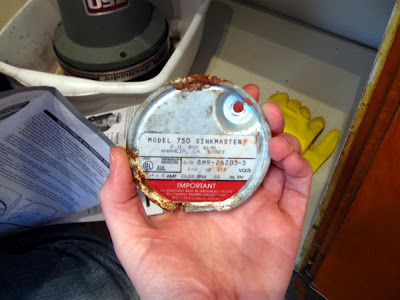 Easy, breezy!  We're like a Covergirl commercial up in here, except that I neglected to shower that day, so Bill got to be all cozy with my stink, under the sink.  I'm a rotten friend. 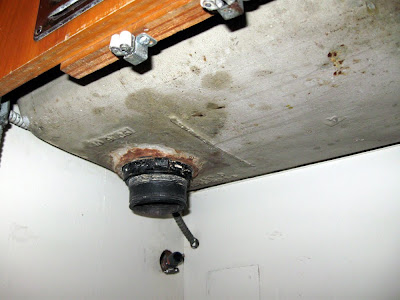 Spend the next TWO AND A HALF HOURS trying to unscrew the flange without damaging your very old sink.  Call your friend Keith, who's in grad school and trying to write papers, for help.  Call the hardware store and see if they have any tips.  Roll your eyes when they tell you they're not familiar with the Sinkmaster 750 and just how old is it?  Finally take a screwdriver and hammer and bust the flange off, using brute force and a couple of good swear words.

High fives!  Your flange has been freed in a storm of winging plastic shards! 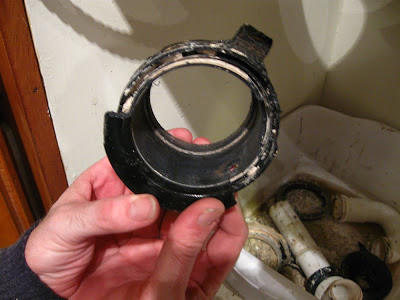 Give Bill a beer while you speculate about what type of superepoxy they used to glue this cusser together.  It was probably the stuff that they use to hold bridges together. 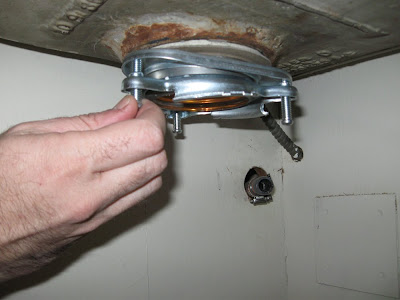 Start installing the new disposal.  This is so much easier! 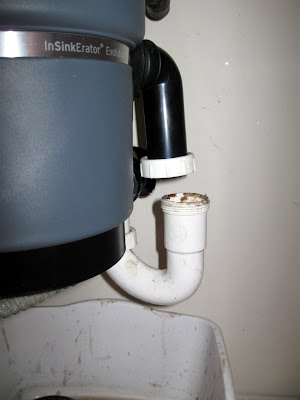 Bemoan the fact that your old pipes don't fit up with your new disposal.  What a difference an inch makes.  Put all these pipes in a bag and take them to The Home Depot where you buy new pipes and extenders.  The next step is very important:

*Leave the bag of old pipes sitting on the floor at The Home Depot.*

Get home and realize that you left the bag of old pipes at the hardware store and pray that your new pipes will all work. 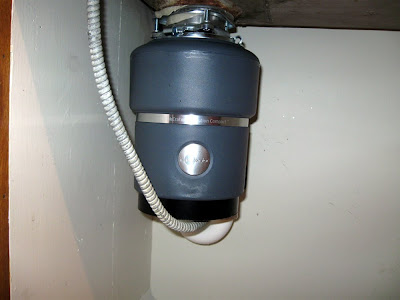 Thank your lucky stars that they work!  Make sure that one page of instructions, the part where they tell you to punch a hole in the dishwasher input so your dishwasher can drain through the unit, is folded under so you don't see it.  Test the disposal and scratch your head over the fact that your dishwasher now won't drain.  Really start sweating because Thanksgiving is next week and you're hosting ten people and sweet jesus, do you ever need your dishwasher to be working.

Take the disposal apart and then finally realize that you missed a page of instructions.  Punch that small-but-important hole in the dishwasher input and then marvel over the fact that everything works and nothing seems to be leaking.

Buy Bill dinner and promise him that you'll never ask him to help with home repair again, but keep your fingers crossed behind your back.

Get super excited about your new disposal which is super quiet and super effective.  Ignore that guy from high school on Facebook who claims he used to be a plumber and that garbage disposals cause more problems than they fix.  Also ignore your friend who tells you that you should never put food down your drain because it's bad for the water quality.  Pout that NOBODY EVER LETS ME HAVE ANY FUN while you feed orange peels down the drain, just for fun. 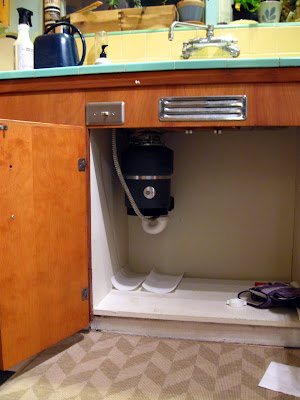 You can take your dog to the Home Depot? 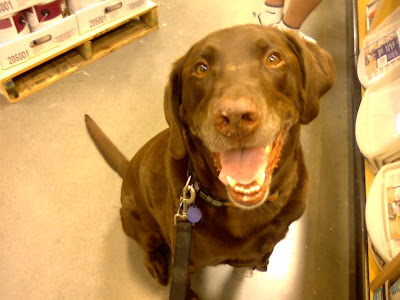 Last time one of the associates told me I needed to "keep my horse saddled at all times."