I had to go back to work the next week, which was probably for the best.  My fingers and wrists were so swollen and sore from gripping tools, scrubbing things, and holding a paintbrush that I woke up in the morning with my hands frozen in a claw.  None of my rings fit and my back was a mess.  I stopped by the house after work to throw another coat of paint on the closets and built-ins and found that the cheap styrofoam cooler of beer I had in the kitchen had cracked and leaked all over the kitchen floor. 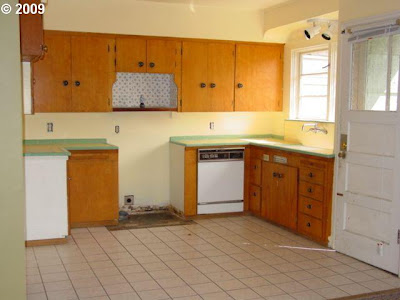 The kitchen tile before

Since the tile was cracked and lifting in places (which you really can't see in the photo), all the water traveled into the subfloor.  Luckily, I was already planning on replacing the kitchen floor and had already gotten six bids and ordered the materials.

I pulled up the tile right then and there until I hit dry floor.  The water had spread the 9 ft length of the kitchen, to about a six feet width.  I pointed a fan at the floor and hoped it would be okay. 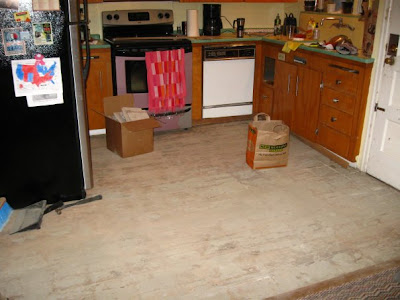 The upshot to this whole situation was that the mortar and grout that had been used to put the tile down scraped off quite easily.  In retrospect I wish the water had spread MORE because that last 30 or 40 square feet that stayed dry was a pain to clear.  I rented a floor scraper from the North Portland tool library but I didn't have the requisite upper body strength or stamina to use it very effectively.

I had ordered black and white Marmoleum, to be laid in a checkerboard pattern.  The installers were planning to put down a 1/4" underlayment beneath the tiles, but the subfloor would need to be pretty smooth.  Ultimately I went to the hardware store and rented a belt sander.  Gary at the Home Depot really didn't think this would work.  He asked he if I had considered a power washer.  I reiterated that I was removing thinset INSIDE MY HOUSE.  In the kitchen.

He suggested Goo Gone.  I asked him if he knew what thinset was.  Was he familiar with ceramic tile and how it gets attached to things?

He really tried to talk me out of the sander.  I was really tired at this point.  He very begrudgingly rented it to me.  He and his coworker joked back and forth that it was going to take me all night, that it was good I had a sleeping bag in my trunk, that it was a good thing I could have the sander until morning.  He tried to sell me 15 sanding belts, because "I was gonna need them."

And guess what happened?  The sander worked like a charm.  I had the sander back to them in less than two hours.  I had used two sanding belts, but could have gotten away with one. 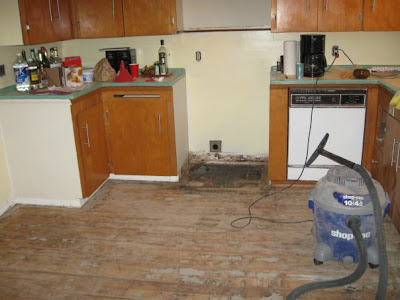