After almost a year of obsessively walking our neighborhood and discussing the merits of other people's paintjobs (that's what the song OPP was about, right?) we booked a house painter. We've been playing with the Sherwin Williams color visualizer, which is a pretty nifty tool. Our painter dropped off a book of color combinations and we plugged in a couple of our favorites, only to find that they looked terrible once we pulled them up on the visualizer. Accidental finding: it's really helpful to have your neighbor's house in your photo so you can see how your house will look next to theirs (the house on the right side of us is white).

I'd love to paint the house a warm white and let the landscaping provide the color, but Greg won't go for it. He says it will get too dirty. This from a man who hates that I ask him to remove his shoes inside the house.


We are both leaning toward blue at this point but blues are *so* tricky. Complicating things is the fact that our house doesn't have much trim, so we don't have a whole lot to diffuse or play off of a bold color. Our windows don't have a paintable inset, so we can't use two colors on them. And our roof is kind of orange. I love the orange but gray would be way easier to work with. 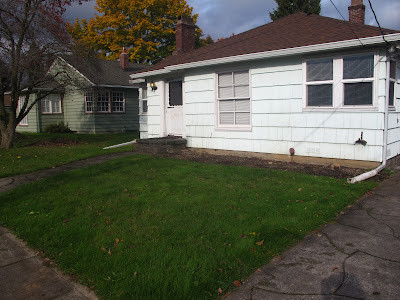 In fact, the more I look at this picture of my house the more I realize that my house just isn't that great to look at from the outside, bad paint job aside. I never really realized this because I'm in love with my house. I imagine this is what it feels like when a parent realizes that their child is not beautiful to other people.

You guys, my house has a good personality. *Sniff.*

We are tentatively booked for late February. As in this month, holy sh*t. The painter will paint three different swatches on our house for free, after that we have to pay extra. He said one client had him put up 16 different swatches . . . and then never paid him. As long as it's not raining, they can paint during the winter using a special paint. He claims it's more durable so it's a good deal for us. I assumed they only work in the summer so this is a nice surprise.

Our friend Maura warned us that we would hate the first swatches we put up, no matter how much we liked them in the visualizer. This makes sense; it always happens with interior paint colors. So we're kind of resigned to paying more for more swatches. Part of me wants to ask the painter to "surprise us" with his favorite exterior color, like you'd do with a server in a restaurant, but I know our painter won't go for it.


Has anybody painted their house? Any mistakes you made or words of wisdom? Go ahead, get opinionated.
Posted by Heather